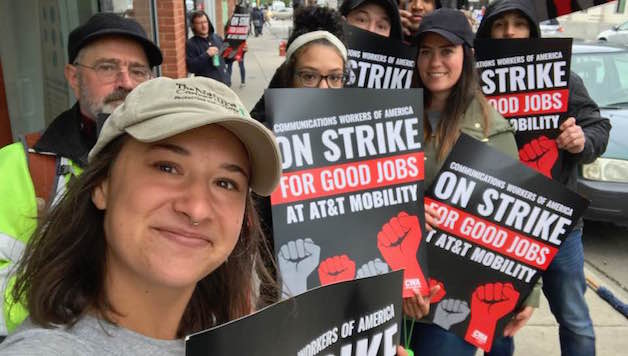 In more than 37 states, 38,000 AT&T workers represented by the Communications Workers of America (CWA) went on a three-day strike – the first major strike of the Trump era. It follows on from last year’s successful strike by CWA members at Verizon.

The strike affects 17,000 workers who provide phone, cable, and landline services in California and Nevada, as well as 21,000 members employed by AT&T Mobility, most of whom are either retail sales or call center workers with no previous experience of going on strike. The strike may be the biggest job action by retail workers at a single company in U.S. history.

Main demands of the Mobile units include a pay raise to cover increased healthcare costs, a higher base pay and/or a fixed rate of commissions for retail sales workers, no increase in health contributions in 2021, and an end to a two-tier plan that puts health care beyond the reach of new employees – who are not covered at all for their first six months of employment, according to workers on the picket lines. Equally importantly, contract demands call for job security language against contracting out the retail stores to subcontractors whose employees have no union representation, against outsourcing networks to outside contractors and call centers to countries where employees have no union rights. CWA is demanding that outsourcing be reversed, creating more union jobs.

Employees on the picket line report that, under the current policy, they have no sick days. When they call in sick, they earn a “point”; eight points in a year means discharge.

AT&T is the largest telecommunications company in the country, with $164 billion in sales and 135 million wireless customers nationwide – almost a third of the market. With $13 billion in profits in 2016, CEO Randall Stephenson was paid $25 million. After buying up DirecTV for $67 billion in 2015, it’s now bidding $85 billion for Time Warner. It has eliminated 12,000 call center jobs in the United States since 2011, representing more than 30 percent of its call center employees, and closed more than 30 call centers.

The company has also outsourced more than 60 percent of its wireless retail stores to subcontractors who pay much less than the union wage.

The relocation of jobs to call centers in Mexico, the Philippines, the Dominican Republic, Jamaica, and other countries is a major issue in negotiations. In an inspiring display of labor internationalism, CWA has supported organizing efforts in these countries, where workers face violence and intimidation and get paid as little as $2 an hour.

As Seattle socialist Councilmember Kshama Sawant pointed out in her message of support:

“Our sisters and brothers in the CWA have done an incredible job of bringing together many regional contracts and strike votes, comprising landline phone workers, wireless store retail workers, and call center workers, into a powerful common national strike.”

Workers and supporters on the picket lines could see that the strike is cutting into profits, with management employees flown in from out of state to try to keep most stores open and very few customers willing to cross the picket lines. The workforce is both young and diverse, as a new generation discovers the power of the union. The fight for a decent contract will most likely not end here and will quite possibly require an indefinite strike, which the union seems to be preparing.