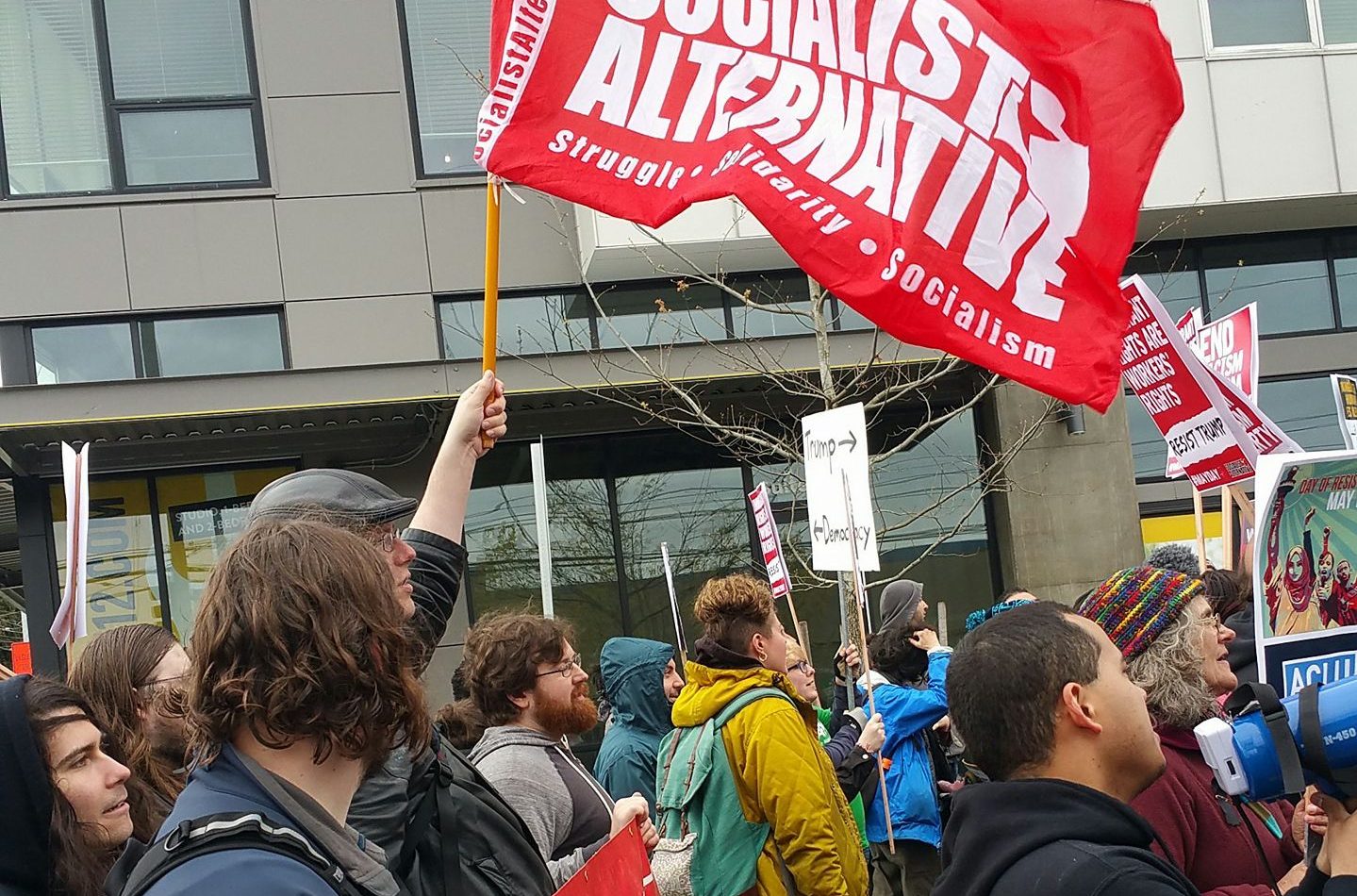 Tens of thousands of people took to the streets on May 1, 2017, in the latest show of resistance to Trump. Marches and rallies around the country were in many cities the biggest since the historic 2006 “Day Without Immigrants” protests.

With the huge opposition to the Trump administration’s right-wing agenda, the potential existed for millions of people to protest and many to go on strike if the labor leadership had given a bold lead and united with the immigrant rights movement. But the re-emergence of discussion about strike action in the run up to May Day was nonetheless of major political significance. Withholding our labor is the most powerful tool we have as workers and, if used properly, can be the means by which we score significant victories against Trump going forward.

Below we publish May Day reports from a few of the many cities in which Socialist Alternative organized and participated. Read our in-depth Chicago report here and watch our New York City video report here.

Five thousand immigrants and workers crowded the streets of the Fruitvale district in Oakland, California for the annual May Day march. The clear target this year was the Trump administration. Businesses were closed throughout this predominantly Latino neighborhood as young and old alike chanted to end deportations. Night shift fast-food workers mixed alongside feathered Aztec dancers and a predominance of socialist groups.

Earlier in the day, young activists closed down ICE centers on both sides of the bay before some 7,000 marched down Market Street, San Francisco’s main thoroughfare. With SEIU, teachers’ unions, and fight for 15 contingents, the May Day events had a more militant political character than the preceding April marches, even if it was not the biggest.

Socialist Alternative organizers attended events in both San Francisco and Oakland, where our red picket signs were to be seen throughout the crowds, and we sold out of our “Sin Muro, Sin Redadas, Sin Guerra – No Wall, No Raids, No War” signs.

We set up tables at the staging ground at Fruitvale Station and at the rally point at San Antonio Park. At Fruitvale we sold out of papers and passed out Spanish language fliers connecting the historical beginnings of Mayday with the Resist Trump movement. At the tail end of the march, we held impromptu meetings with groups of 6 and 8 young people eager to hear how we explained capitalism, how to fight Trump and what socialism is. Many signed up to attend an upcoming meeting to learn more about Socialist Alternative.

Bay Area Socialist Alternative built up for May Day throughout the month of April, petitioning and tabling. We’ve helped to identify socialism as a key component in the resistance to Trump and connect hundreds in the bay area to what SA is, and what we are fighting for.


May first started like every day for me in Bellingham, with rain, and students shuffling to early morning classes. At about 3:30 in the afternoon, marchers organized by Familias Unidas (a local farmworkers union) and other groups gathered in downtown Bellingham to break the silence. Around 80 marchers from diverse backgrounds walked and chanted through Bellingham’s most commercialized districts and about three miles down the road to a nearby park to hear speeches, songs, and testimonies. We were also grateful to receive a delicious post-march meal put together by Familias Unidas.

The chants and protest songs were explicitly anti-capitalist, anti-racist, anti-trump, and solidarity driven. Members of Socialist Alternative marched alongside folks from the Lummi Nation, the IWW, farmworkers and others to deliver a powerful message of solidarity and working-class consciousness.

In Houston, May Day brought together immigrants rights groups (CRECEN, United We Dream), union forces (AFL-CIO, SEIU, United Here), socialist groups, and other organizations. About 700 people marched through the downtown area, chanting “Up with the Workers, Down with the Bosses” and “Si se puede” as workers on their lunch breaks looked on. At a rally in front of city hall, speakers demanded a $15 minimum wage, stronger unions, Medicare for All, and the defeat of the brutally anti-immigrant Texas Senate Bill 4.

At both events, Socialist Alternative had a strong presence with our bright red banners and large contingent which led chants along the march. We had great conversations with many interested people and invited them to a public meeting about how we can defeat Trump’s border wall and local deportations.

Overall, the day was a step forward in building the resistance in Texas against Trump and the right wing.

Despite heavy rain early on in the day, thousands of people came out to rally at Seattle’s annual May Day March for Workers and Immigrant Rights, traditionally one of the largest and most diverse demonstrations of the year. While uncooperative weather may have hampered turnout, this year’s march proved itself to be a lively and politically charged affair.

The Trump administration’s attacks on working people during his first 100 days in office were on the minds of many demonstrators. Socialist Alternative’s red signs bearing demands such as “No Walls, No Raids, No War,” “Black Lives Matter,” and “Immigrant Rights are Workers’ Rights” were plentiful throughout the march.

Compared to demonstrations in the past, this year’s May Day march featured a more prominent labor presence with union members from SEIU, UFCW, the Carpenters Union, Seattle Education Association, and many other unions taking part. Along the 4-mile march route demonstrators took action at 3 stations to support faculty at Seattle University fighting for union recognition, workers at Swedish Medical Center in the midst of a contract campaign, and security officers at Amazon headquarters also seeking to unionize.

Socialist Alternative members Leticia Parks and Seattle City Councilmember Kshama Sawant spoke at the pre-march rally. Both Sawant and Parks called for escalating the resistance against the Trump Administration, building a powerful and united mass movement, and highlighted the need for independent politics both locally and nationwide.

As the march wound its way through downtown Seattle chants of “When workers’ rights are under attack, what do we do? Stand up Fight back!,” and “Aqui estamos, y no nos vamos!” reverberated off the walls of city buildings. The Seattle May Day march made it clear that the resistance is just getting started, and workers and immigrants will continue to fight back against Trump and the billionaire class.