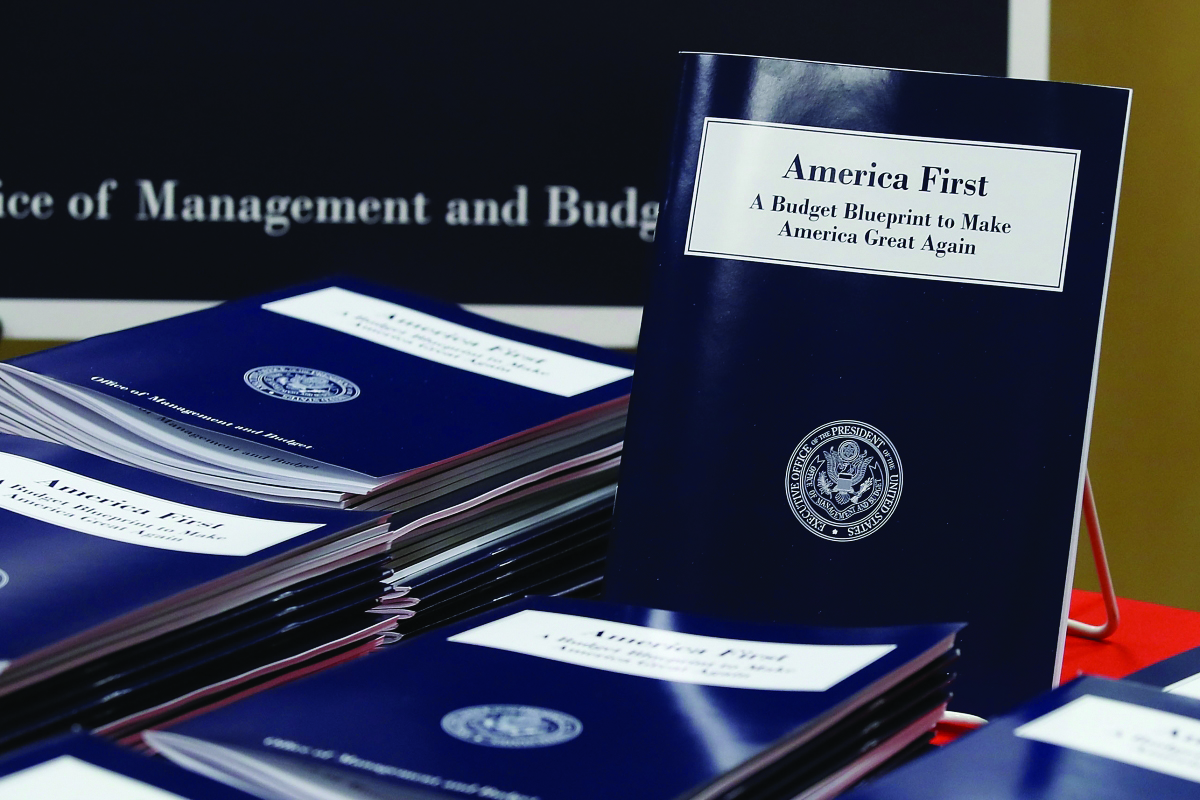 The 53-page budget proposed by the Trump administration, “America First: A Blueprint to Make America Great Again,” exposes their utter contempt for working, poor people, and particularly people of color. No wonder, given that the billionaire President Donald Trump and his cabinet of millionaires, billionaires, and alumni of the notorious Goldman Sachs firm have more wealth than forty-three million Americans combined.

Cuts for Working People; Money for Bombs and Walls

“America First” is a vile frontal attack on working people and the poor. The budget encompasses $54 billion in cuts and eliminates long-standing federal social programs and support for arts and sciences. But it’s not all cuts. Trump’s $1.15 trillion budget transfers $54 billion from vital social services to already vast military and Homeland Security budgets and includes billions for the famous wall on the Mexican border. He also wants to increase spending for charter schools continuing the attacks on public education and teacher unions.

Some key Trump cuts are:

The cuts to the Appalachian Regional Commission – established by President Lyndon B. Johnson in 1965 as part of the War on Poverty – would be devastating to many working, poor people, and Trump supporters in the region. The 52-year-old program provides federal funding for running water, retraining, and education in the region. The rustbelt states and Appalachia continue to be hit the hardest by the loss of manufacturing, textile, coal jobs, as grinding poverty and economic inequality increase.

The proposal decreases the Transportation Department by $2.4 billion which would eliminate funding for new projects and particularly long distance Amtrak construction. This will have a major effect on cities and infrastructure which Trump claims to want to overhaul.

The Department of Justice (DOJ) also has a $1.1 billion decrease, but its 2018 proposed budget of $27.7 billion will be used to strengthen its law and order mandate under Jeff Sessions, attacking immigrants, BLM, and people of color. Already, the DOJ has made it clear it will back away from the various consent decrees with cities found responsible for law enforcement abuses.

This vicious budget proposal is in line with the recently defeated Ryan and Trump Care proposal. If passed, Trumpcare would have had deadly consequences. There would be 24 million more people without health care access, insurance premiums would explode for the elderly and poor, and the richest 400 households in America would each receive an average annual tax cut of $7 million (Center on Budget and Policy Priorities).

A Sustained Fightback is Needed!

Trump’s budget is an open declaration of class war. We must organize a sustained fight back and put the cost of the social crisis in U.S. society on the backs of the 0.01% and Wall Street where it squarely belongs. Through continued agitation, protest, demonstrations, and nonviolent civil disobedience we can defeat Trump’s austerity budget just like Trumpcare was defeated. The labor movement must take a stand for working people against Trump and mobilize its base. We need a people’s budget that places the needs of the 99% over the greed and profits of Wall Street.