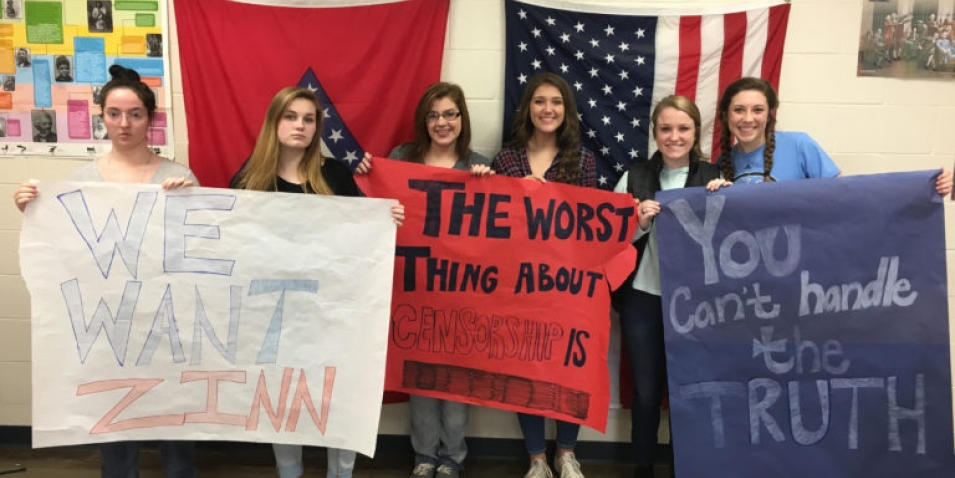 In 2000, a group of radical leftist students called the Campus Democracy Collective arranged to have Howard Zinn speak at the University of Arkansas in Fayetteville, where I saw him speak for the first time, along with a couple hundred other students.

Seventeen years later, Arkansas state legislator Kim Hendren (Republican) has recently introduced a bill to the Committee on Education barring any “public school district or an open-enrollment public charter school” from including “in its curriculum or course materials for a class or program of study any book or other material” written by or about Howard Zinn from 1959 to 2010, the year Zinn died.

Historian Howard Zinn wrote numerous books presenting United States history from the point of view of working people and the oppressed, the most well-known of which is A People’s History of the United States (1980). Zinn wrote about such topics as the genocide committed against Native Americans, the horrors of slavery, and the Seattle General Strike.

Conservatives (and too many liberals as well) deride Zinn as a “revisionist,” but his writings are “revisions” only in the sense that they do not present the accepted heroic national mythology centered on presidents, generals and leaders of industry. This alternative history, however, is threatening to people in power like Representative Kim Hendren (brother-in-law of Arkansas Governor Asa Hutchinson) who perhaps recognize that even a little discussion of class and oppression can radicalize young people against the capitalist system, as is increasingly happening across the country. Zinn said to the New York Times of his most famous book, “It’s not an unbiased account; so what? If you look at history from the perspective of the slaughtered and mutilated, it’s a different story.”

Zinn wrote positively about abolitionists, feminism, the labor movement, and the antiwar movement. These are the kinds of mass movements that can inspire us and give us hope in the age of Trump but which are often left out  or glossed over in conventional history books. Zinn said that he wrote about “the people who have been overlooked in the traditional history books.”

In 2007, Howard Zinn published A Young People′s History of the United States for youth. That same year, the Zinn Education Project was established by schoolteachers to offer free or low cost materials based on Zinn’s works and like-minded texts to middle- and high-school teachers. Representative Hendren’s proposed bill is aimed at undermining efforts like this. But the proposed bill seems to be backfiring. The Zinn Education Project is now offering a book by Howard Zinn and A People’s History for the Classroom to any Arkansas teacher who requests them. Already, they say, 600 Arkansas teachers and school libraries have sent requests.

The bill is not expected to pass. In the end, all Representative Hendren may succeed in doing is getting more people interested in Zinn’s writings. Nevertheless, Hendren’s proposed bill represents a threat to freedom of speech and academic integrity that must be opposed. This is not the first time politicians have moved to bar Zinn’s books from schools. Former Indiana Governor Mitch Daniels requested doing so in e-mails from 2010 obtained by the Associated Press in 2013, but no legislation was put forward. In 2011 A People’s History was removed from schools in Tucson as part of Arizona’s ban on Mexican American studies.

In the age of Trump, the right is particularly emboldened and will continue to attack public education in many different ways. We need to oppose bills like this wherever they appear. Zinn’s writings offer an important counter-perspective to the ruling class’s view of history. Reading Zinn has had a powerful effect on many people, particularly young people. So much of what is taught in public schools is antagonistic toward working class politics and socialist ideas, and Zinn is one of only a few left-wing authors whose writings have broken past the barriers against them. As Marxists, we would have more to say about capitalism and socialism than Zinn hints at in his People’s History. But the presence of Zinn’s book in some schools is important, and we can’t afford to cede this ground to the growing right wing assault on education.

Lessons of the Ginger Campaign – Socialist Alternative’s Approach to Elections

ABOUT US
Socialist Alternative is a national organization fighting in our workplaces, communities, and campuses against the exploitation and injustices people face every day. We are community activists fighting against budget cuts in public services; we are activists campaigning for a $15 an hour minimum wage and fighting, democratic unions; we are people of all colors speaking out against racism and attacks on immigrants, students organizing against tuition hikes and war, people of all genders fighting sexism and homophobia.
Contact us: info@socialistalternative.org
FOLLOW US
© Socialist Alternative 2020 | All rights reserved
317 Shares
Tweet
Share317