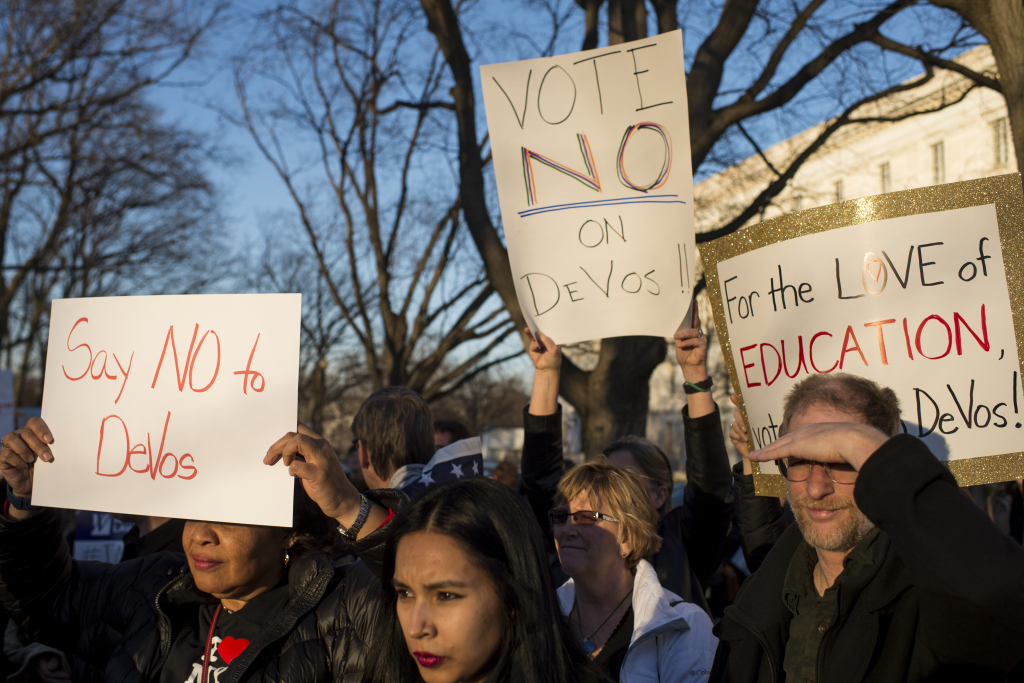 As DeVos and Trump move to put forward their vision for public education, we’ll continue to hear that our educational system is broken and that an overhaul is needed to restore it. No one would disagree that public education has major problems, but this is rooted in the long-term impacts of funding cutbacks, racial and income disparity, underpayment of teachers, and education “de-form” policies supported by both Republicans and Democrats that utilize high-stakes testing. But the solution offered by Trump and DeVos – the partial or complete dismantling of public education – will make the situation far worse, particularly for poor working-class communities.

Betsy DeVos is the most clearly reactionary choice for Secretary of Education that Trump could have made. For the last 20 years, DeVos has been pushing for “school choice” – in other words, for the creation of charter schools to replace public schools. This is, to a significant degree, driven by a right-wing Christian agenda that demands schools be used to build “God’s kingdom,” putting an end to secular public education as we know it.

DeVos is a billionaire with no experience in public schools. Instead, she has worked tirelessly to privatize education in the state of Michigan, where deregulation of charters has led to worsening conditions in the state’s poorest communities. DeVos has consistently opposed any accountability for the largely for-profit charters in Michigan receiving public money.

Education “reformers” are constantly trying to cite the benefits of charters over public schools. But after following the massive privatization program supported by DeVos, the state of Michigan still is one of the lowest-ranking in the nation academically. The situation is so bad that even supporters of school choice are critical of the policies DeVos and others have implemented. Michigan State Board of Education President John Austin has stated that these reforms are “destroying learning outcomes … and the DeVoses were a principal agent of that” (Politico.com, 12/9/2016).

Since Trump was sworn into office, there has been a wave of anger across the country and around the world. In the lead-up to the Senate vote on the DeVos appointment, teacher unions organized a major “get out and call your local representative” action. The National Education Association reported that more than one million people used a generated online form to send an email to their senator. Following DeVos’ appointment, a number of student walkouts have taken place across the country in places like New York, Idaho, and Pittsburgh.

In Washington, D.C., teachers, parents, and community members of Jefferson Middle School Academy blocked DeVos from entering their school. Unfortunately, rather than support this action, American Federation of Teachers President Randi Weingarten tweeted, “We want her to go” to public schools (CNN.com, 2/10/2017). DeVos, however, will not be “won over” by visiting public schools. She knows her agenda. The issue, instead, is how to mount a massive opposition to make her policies unworkable.

The recent defeat of a ballot initiative to raise the charter school cap across the state of Massachusetts shows how victories can be won. Big business pumped millions of dollars into raising the cap. The “No on 2” campaign was a massive effort that both the Massachusetts Teachers Association and the Boston Teachers Union fully invested time, resources, and membership power to defeat. It included going out into communities and getting parents, students, and community members involved – and they won!

This is the type of organizing that will be necessary to start to defeat Trump and DeVos’ vision for education. We can’t wait for Randi Weingarten to give us the signal to do something. Instead, teachers, parents, and students must unite and help to lead the fight against privatization. In a number of cities, students have shown the way through walkouts against DeVos. We need to link this with other actions against Trump’s agenda of sexism, anti-immigrant deportations, racism, and anti-union laws. The provocation of the DeVos appointment could become the spark of a new movement to defend and regenerate public education in the U.S.