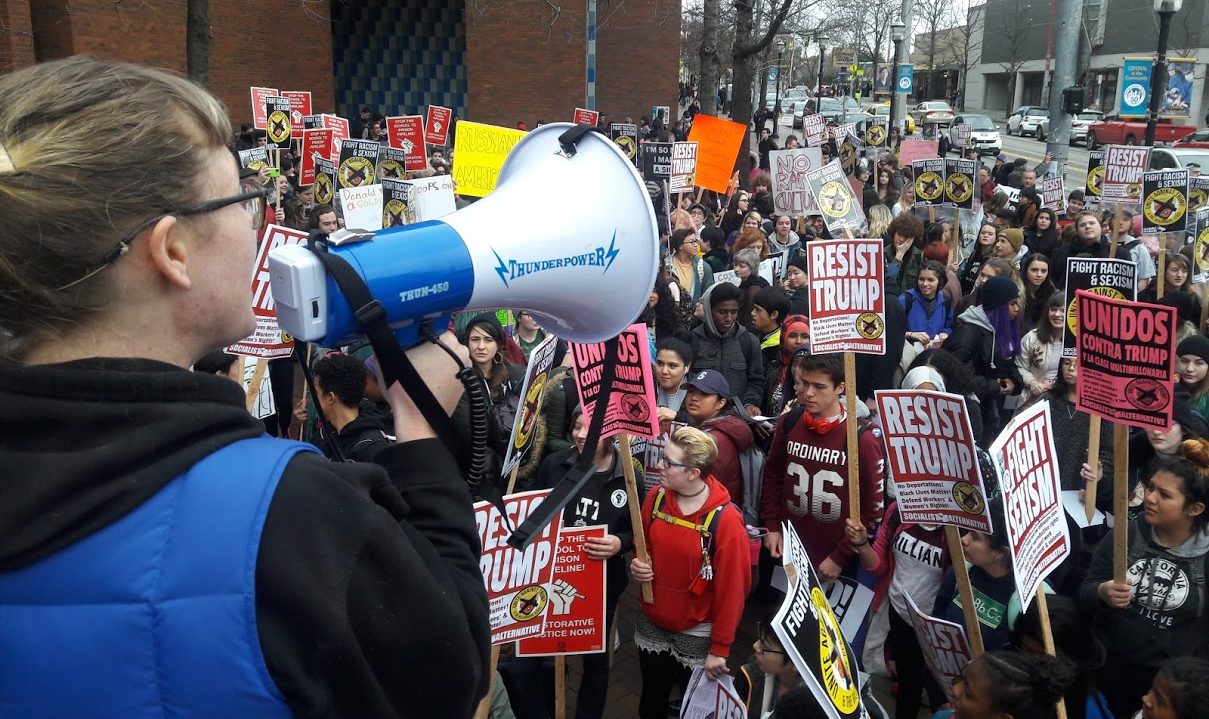 On January 20th, thousands of people attended rallies and marches that culminated in the 5,000-person Resist Trump rally in Seattle. The rally was organized by Socialist Alternative as a response to the newly inaugurated Trump administration and their dangerous right-wing agenda.

“Trump is a liar and a con-man. He has built his administration on the worst muck of the billionaire class, right wing bigotry, and the corporate elite,” declared councilmember Kshama Sawant to a packed Westlake Plaza. “Trump and the billionaire class only understand one thing: power. Our over-riding task is to build the power of the 99% – working people and all those marginalized by the capitalist elite.”

Rally goers came from all over the city – high school and college students who had walked-out of class against threats from the school administration in a day of action led by Socialist Students, marched from Seattle Central Community College and an immigrants rights march organized by El Comité, marched from Judkins Park. Both marches converged in solidarity and met at Westlake Plaza.

The resistance against the Trump administration is imperative. With the Affordable Care Act on the chopping block, millions of people are at risk of losing vital access to healthcare. Right-to-work laws could be nationalized. Deportations of undocumented people may reach even more crushing levels. Socialist Alternative calls for bold demands in the face of right-wing attacks:

Ezgi Eygi, a student at Seattle Central who earlier in day walked out of class along with other middle schools, high schools, and colleges throughout Seattle, gave hope to the crowd gathered at Westlake Plaza with a history lesson. “Mass movements of ordinary people have succeeded in blocking bigoted, right-wing presidents before. Many of the major progressive reforms in the last 100 years, including affirmative action and the creation of the EPA, happened under conservative republican presidents – not because they supported those things – but because of ordinary people like ourselves demanding a change,” remarked Ezgi.

The best strategy to defeat Trump is to unite as progressive social forces. Even though we may have major differences, there’s no time to waste in the fight against the right-wing. We must use every tool available to the working class to beat back the ever-increasing attacks on unions, civil rights, and the environment.

Manuel Carrillo, who spoke to hundreds in front of St Mary’s Church at the El Comité rally, shared his reaction to inauguration day. “This morning I woke up a with a little less spring in my step and a little less pep. As a queer man of color I woke up this morning a little bit more cautious, but the moment I hit the street with thousands of you – all of that went away. I realized right here in Seattle we are ready to build that resistance to Donald Trump. And I realized that we can’t be stopped,” said Manuel.

We need maximum unity in action. But we must not let the need for unity stand in the way of much needed criticism of the Democratic Party whose corporate-friendly politics helped pave the way for the rise of Trump. Sawant railed against the lack of opposition that elite politicians like Hillary Clinton who have said we need to give Trump a chance, and on Friday attended his inauguration.

Kailyn Nicholson expressed how she was heartened by the massive protests occurring over the weekend, but added, “I don’t think this protest will be enough. I think we will need millions of people to be or in an on-going struggle that employs many tactics from protest to civil disobedience to electoral campaigns.”

Kshama Sawant rejected the wait-and-see approach of many Democratic leaders, saying we cannot “afford to wait until the 2018 and 2020 elections to vote the Republicans out.” She pointed to March 8th, International Women’s Day, and May 1st, International Worker’s Day, as dates for more mass mobilizations. If workers are going to build a movement that fights against Trump and for a better future, we must tap into these historical dates of class struggle while building democratic structures for a lasting mass movement against Trump’s hateful agenda by, of and for the 99%. An international movement against capitalism and for socialism is the way forward on the long path to a free and just society.

Near the end of Sawant’s speech, she began to describe to the crowd the kind of world we are fighting for – a socialist world. She explained that socialism is an “egalitarian society, rather than the dog-eat-dog, bloody competition of capitalism. A society based on international cooperation rather than the vile nationalism that Trump is promoting.”

A mass movement must be formed to resist Trump and fight for a socialist future. Individuals committed to organizing in the battle for a socialist world should join Socialist Alternative.

Lessons of the Ginger Campaign – Socialist Alternative’s Approach to Elections

ABOUT US
Socialist Alternative is a national organization fighting in our workplaces, communities, and campuses against the exploitation and injustices people face every day. We are community activists fighting against budget cuts in public services; we are activists campaigning for a $15 an hour minimum wage and fighting, democratic unions; we are people of all colors speaking out against racism and attacks on immigrants, students organizing against tuition hikes and war, people of all genders fighting sexism and homophobia.
Contact us: info@socialistalternative.org
FOLLOW US
© Socialist Alternative 2020 | All rights reserved
85 Shares
Tweet
Share85
Pin
Share