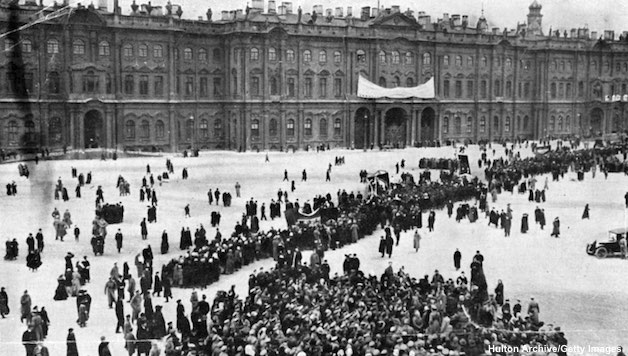 Republished from 1917revolution.org as part of a series of articles that analyse and explain, month by month, the stormy events of the revolutionary year of the Russian revolution. The first in the series, by Niall Mulholland, looks at the events and situation during January 1917.

The month of January 1917 began with more setbacks for the Russian army, as the great imperialist slaughter or World War One drew closer to an end. On the Romanian front troops retreated. Morale in the Russian army was extremely low. One and a half million soldiers deserted in 1916. Over half of the country’s peasant farmers were fighting in the war and their families left at home faced starvation.

At the same time, the Bolsheviks – the revolutionary party spearheaded by Lenin, which was to lead the socialist October revolution – saw their membership and influence rise steadily. They helped organise demonstrations to commemorate the failed 1905 revolution’s ‘Bloody Sunday’ when hundreds were gunned down by the Czarist state. On 9 January, 30,000 Moscow workers went on strike, with 145,000 taking action in Petrograd (Prussian-sounding St Petersburg was renamed at the outbreak of the war). A one-day strike also took place in Baku, Nizhi Novgorod, Novocherkassk, Voronezh, Kharkov, Rostov-on-Don, the Donbass and other cities.

By 31 January, Petrograd was starving and the city stockpile of food would only last another 10 days. Basic foodstuffs had quadrupled in price since the start of the war. Huge food lines appeared in sub-zero conditions. Crowds of women broke into stores.

At the same time, big business made huge profits, particularly those industries involved in producing materials for war.

For the masses, the things could not continue. They were about to storm onto the stage of history. How did the Czarist regime find itself on the verge of extinction?

In late 1914, a series of strikes broke out, but by August social peace seemed to have been restored. War was declared, leading to a surge of Russian chauvinism and popular support for the Czar. Workers’ organisations faced severe repression. Bolsheviks in the Duma (parliament) were arrested and deported. The party paper, Pravda, was shut down.

Initially the Russian army inflicted some defeats on the German forces. But by 30 August, the Russian army had lost 300,000 soldiers at Tanneberg, in the eastern front. Badly equipped and short of ammunition and rifles, the Russian army would face defeat after defeat on the battlefield. At the same time, Russian officers treated the rank and file soldiers with contempt.

The war demonstrated the incompetence and rottenness of the Czarist regime. The Czar appointed and removed a succession of ministers. In August 1915, he took direct control of the war effort, disastrously meddling in his generals’ plans. Much of the running of country was left to his wife, the Czarina, and her coterie, including the “debauched Monk”, Rasputin, a mystic figure with great political influence over the Czarina and her husband. The top of the tottering regime was steeped in obscurantism and superstition. Popular unrest grew. In October 1916 a Petrograd police report stated that the city is “on the eve of great events with which those of 1905 were mere child’s play”. The British Ambassador to Russia, Sir George Buchanon, warned, “If the emperor continues to uphold his present reactionary advisers, a revolution is, I fear, inevitable”.

In December 1916, Rasputin was assassinated by leading figures from Petrograd society. They hoped to rid the regime of a symbol of decadence in order to try to save it. In January 1917, the Czar appointed his last prime minister, Prince Golitsyn, despite the hapless aristocrat’s plea that he was “dumbfounded” and had no interest in politics.

At the start of 1917, over 15 million Russians were under arms and war time industrial mobilisation had thrown the economy out of kilter. Peasants were unable to export their produce and refused to sell food on the open market (the rouble was near worthless). The railway system had all but collapsed and few supplies could get to the front or to the main towns and cities. Famine stalked not just the countryside but the main industrial cities.

Political crisis at the top as working class begins to stir

With the regime completely discredited, even the craven, pro-war ‘liberal’ and ‘reform’ parties went into opposition to the Czar when it became clear he would not make any concessions to popular demands. They called for the sacking of the most incompetent and reactionary ministers.

Plots were hatched by top military figures to get rid of the Czar in order to save the system overall. But the conspirators vacillated, fearing any such action could unleash revolution from below.

Meanwhile, working class organisations are recovering from the setbacks at the outbreak of war. Strikes rose sharply to 55,000 in 1915 and almost double that figure again in 1916. As prices rose faster than wages, the summer of 1916 witnessed militant strikes in Moscow, Kostrona and Ivano-Vosnessenst. Petrograd was rocked by a general strike of factories. When troops sent to put down the strikes instead fraternise with workers, Cossacks are needed to quell the workers’ protests.

As working class unrest grew, so did Bolshevik membership. The party’s structures redeveloped, including the Petrograd city committee. With many veteran leaders exiled or imprisoned, a younger generation of party cadres took control of local leadership. By 1 January, the Bolsheviks, though a relatively small party, grew in membership to around 23,000, and were largely concentrated in industrial pockets.

Lenin and the Bolsheviks gain authority

The Mensheviks –the party with whom the Bolsheviks had split some years before – were in political disarray. A minority opposed the war while others gave barely-disguised support. During the summer of 1916, militant strikes and a growing mood of war ‘defeatism’ saw a shift of working class support away from the Mensheviks’ equivocal position on war and peace.

As the revolutionary pitch rose in Russia in early 1917, Bolshevik leader, Vladimir Lenin, was exiled in Switzerland. Since 1914 Lenin was forced to swim against the tide due to the war hysteria and the betrayal of the parties of the 2nd (socialist) International who supported the war aims of their own ruling classes.

But Lenin’s stature and authority grew from 1914 to 1917. After the collapse of the 2nd International, he became a focus for anti-imperialism and genuine socialist internationalism.

In the months following the February revolution, the Bolsheviks won the support of the majority of the working class. This was not only due to the leadership role of Lenin and Trotsky during the tumultuous events of 1917. It was also the fruit of many years of intense debate among Russian socialists about the character of the impending revolution and developing and clarifying a political programme, strategy and tactics for the working class to win power.

As the war dragged on and popular opposition to it grew, Lenin advised Bolsheviks to “organise cells in the army”, to “support all revolutionary actions of the masses of the proletariat” and to encourage “fraternisation between soldiers of belligerent nations, even in the trenches…”

The winter of 1916/1917 was exceptionally cold in Moscow and Petrograd, plummeting to minus 40 degrees centigrade. Women stood in the open air queuing for scarce food and coal. The price of food suddenly shot up by 40% to 60%. At the same time, the rich continued to live in isolated splendour.

By the end of January, class tensions reached breaking point and Russia stood on the edge of the first revolution of 1917.

Thousands of Nameless and Faceless Heroes: The History of the Trotskyist Left Opposition