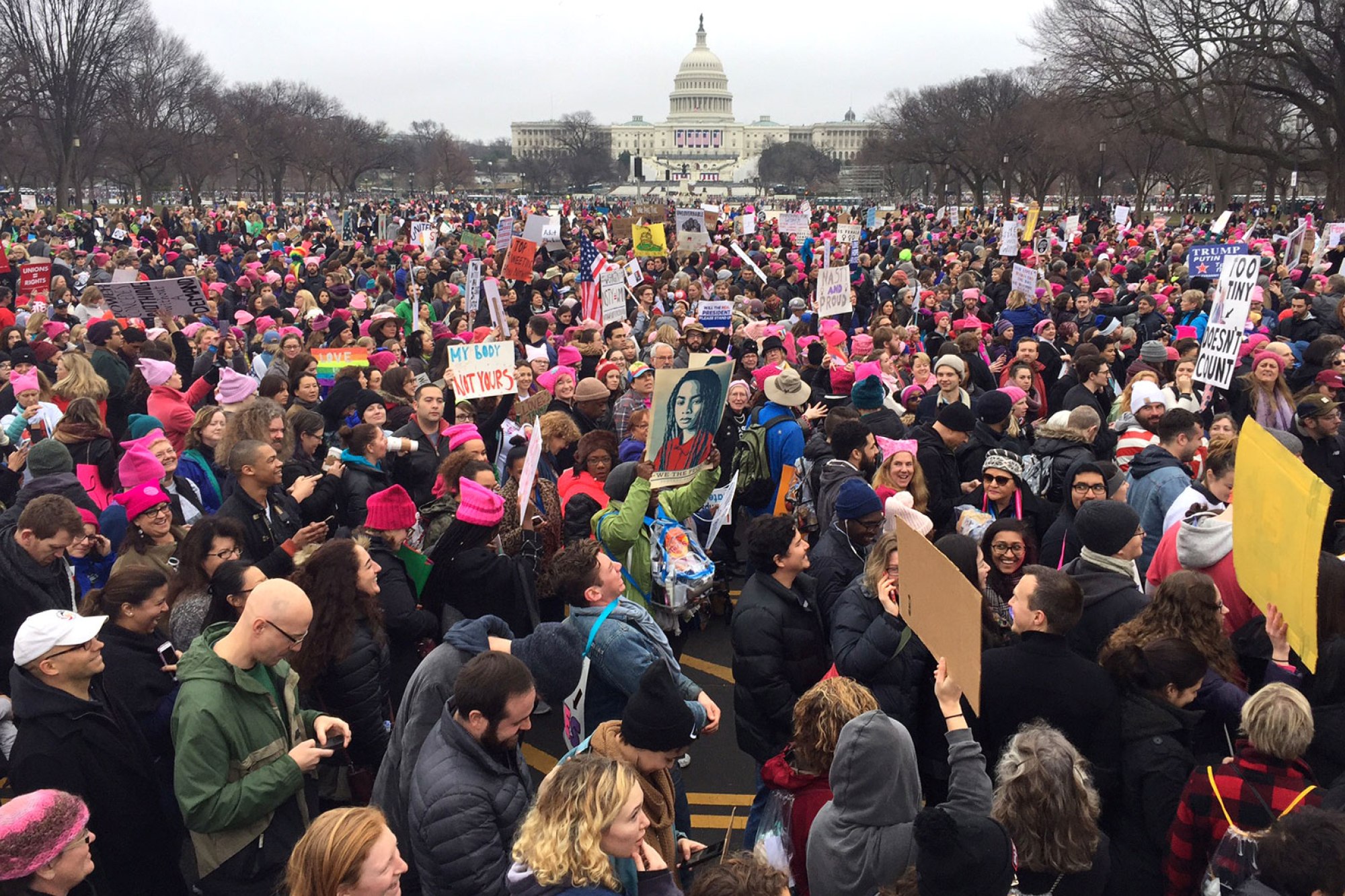 January 21, 2016, will go down in history as one of the largest ever days of protest in the United States as Women’s Marches were attended by tens and hundreds of thousands in city after city across the country, in a show of mass defiance to Trump’s right-wing agenda. The protests were also taken up internationally, with events organized on every continent. The numbers are staggering. Even according to the lowest crowd estimates, more than three million attended marches; the actual total is likely above four million. Between 1% and 1.5% of the U.S. population was in the streets the day after Trump’s poorly attended inauguration. In many cities, march organizers were overwhelmed by the massive crowds, and predetermined routes became irrelevant as marchers spilled onto side streets.

The mood was buoyant. In New York, Oakland, and Los Angeles, the enormous turnout was soon evident as marchers had trouble even getting out of subway trains to arrive at the gathering points. There was a tremendous feeling of solidarity in the shared rejection of the sexism, racism, xenophobia, and Islamophobia peddled by Trump that was obvious from homemade signs, tee-shirts, buttons, and chants. Signs with feminist themes were everywhere: “Fight like a girl,” “The future is female,” and “Men for women’s rights.” Others attacked Trump with humor like “Not My Cheeto.” Also addressed were a host of other critical issues such as “Black Lives Matter,” “Science is Real,” and “Health care for all.”

Socialist Alternative branches participated in protests in cities across the country, including in Madison, where Socialist Alternative member Teddy Shibabaw spoke to an estimated crowd of 100,000 people, saying: “We are absolutely right to have served notice on the Trump administration, that from the first day, we will not accept and we will resist Trumpism.” In Oakland, Socialist Alternative staged a rally at the march’s start with well-received speakers and chants. Dozens of protesters lined up to take selfies with Socialist Alternative’s truck which was outfitted with “Resist Trump”and “Join the Socialists” banners. The most popular chants were “My body, my choice!” and “Say it loud, say it clear, refugees are welcome here!”

There is now no doubt that Predator in Chief Trump lacks a popular mandate for his anti-woman, anti-immigrant, and anti-worker agenda. But there are pressing questions that an effective movement to stop Trump will have to grapple with to ensure that January 21 is remembered as the day a powerful movement came to the fore and not a one-time pressure release. Hillary Clinton and other Democratic leaders have told us that we need to “give Trump a chance” and that “Trump deserves our support.” But we cannot afford to wait until the 2018 or 2020 elections. In just his first few days in office, Trump is dismantling the already inadequate health care system, moving to build a wall on the Mexican border, and ordering permits for work to restart on the Dakota Access and Keystone XL Pipelines.

Any successful movement will have to base itself on maximum unity in action and the social power of the working class. Massive marches like what we saw on January 21 are essential to build confidence and inspire people to join the movement. Socialist Alternative disagrees with the condescending approach of some on the left toward these historic protests. While it is broadly true that the marches were in no way radical, and in many areas lacked diversity, they are a tremendous starting point that we need to build on toward an ongoing and powerful movement. That will mean welcoming new people who are just becoming politicized, helping them develop into activists and winning those to socialist ideas who see that a serious and sustained approach to organizing is essential and that capitalism is a failed system.

To defeat Trump’s vicious attacks, it will be necessary to actually shut down “business as usual.” We need independent, democratic organizations to mobilize millions into the fightback. Mass demonstrations and civil disobedience on International Women’s Day, March 8, can send a powerful message that our movement is prepared to continue the fight against Trump for as long as it takes.

The Democratic Party could choose to fight and block much of Trump’s agenda, like the Republicans relentlessly stymied Obama even when he had Democratic supermajorities in Congress. They could help build mass protests to oppose Trump’s agenda. They could filibuster and prevent appointment of a right wing, misogynist Supreme Court judge. But recent experience strongly suggests reliance on the Democratic Party to fight Trump would be dangerous for working people. Already many Democrats, including Elizabeth Warren, are voting to approve Trump’s horrific cabinet picks.

To galvanize millions into struggle, we need to fight for concrete demands beyond just playing defense. Encouragingly, the Women’s March organizers developed a broad program, demanding “open access to safe, legal, affordable abortion and birth control for all people” as well as support for racial justice, LGBTQ rights, immigrant rights, and a living wage. A movement against Trump that fights for Medicare for all, a $15 minimum wage, and to address the economic problems of working class people can win over many of those conned into voting for this billionaire swindler, but on a firm anti-racist, anti-sexist basis. Bernie Sanders’ presidential run showed the enormous popularity of a pro-worker, anti-corporate program in spite of fierce establishment opposition. It is up to us, the millions of outraged, ordinary working people and students, to build a movement that can defeat the horrors of the Trump administration.