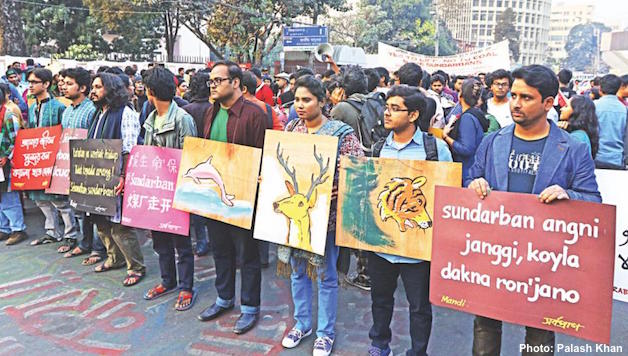 Mass protest action is again hitting Bangladesh – a country with a militant tradition of struggle. A half-day hartal or general stoppage has been declared for this Thursday, January 26. It is part of an ongoing campaign of protests against a power plant which threatens the livelihoods of 50 million rural poor in this country – the eighth most populous in the world.

Last year, on the 12 December, tens of thousands of garment workers in the capital, Dhaka, came out in a week-long strike. They were demanding a minimum monthly wage of 15,000 taka (£158) – a 300% increase on the current minimum wage. The strike is thought to have begun at the Windy Apparels factory, which had seen the gruesome death at work of an employee in October.

According to the Guardian (UK), the strike was provoked when 121 workers were sacked.  Their protests were declared illegal and 10 demonstrators were injured by rubber bullets. The strike then spread to other factories in the Ashulia area and by the 20th December, 59 factories were closed. Many were shut down by factory owners, who locked out the workers rather than face strike action.

The government mobilised the notorious Rapid Action Battalion police force. Three officers from this same unit have just been sentenced to death after they were involved in politically motivated murders in 2014, in a trial which concluded 17 January this year. One of the three officers, Tarek Sayeed, is the son-in-law of a government minister, the BBC reports.

Fearing the garment workers’ strike would spread across the country, on the 21st December the government began to round up union leaders. This was despite the clearly spontaneous nature of the strike. In fact, the Clean Clothes Campaign, an NGO, reported that “none of the major trade union federations have endorsed the strike. At a number of press conferences, trade union leaders have instead urged workers to return to work.” Prosecutions swiftly followed and other union leaders went into hiding.

Around 5 million textile workers produce 80% of Bangladesh’s exports, and if successfully unionised they would have huge power. The continual attempts at unionisation made by the heroic textile workers constantly meet with police action and sackings. When the names of workers who wish to form a union are submitted to the government, as required by law, the government, with its many ties to the garment industry, simply turns the names over to the bosses, who then intimidate or sack them.

The Clean Clothes Campaign, other NGOs and the liberal media focus on appeals to the government, the employers and the many high street brands that profit hugely from the poverty pay and long hours of the workers. They are all important campaigns but it is nevertheless the independent class organisation of the workers that is the essential first step.

This militant section of workers face a brutal regime of exploitation. The Guardian reported on  27 December that up to 3,500 workers were sacked in what was the first widespread action since the Rana Plaza collapse fatally buried more than 1,138 garment workers beneath piles of rubble and injured 2500 more. (See http://www.socialistworld.net/doc/6751 and http://www.socialistworld.net/doc/6284  )  At that time, the government declared a day of mourning but incredibly, some bosses kept their factories open. Protesting workers burned two of them down, such was their rage. The government was forced to introduce the present minimum wage but it is totally inadequate.

Windy Apparels, where the December strike started, was supplying a number of well known high street outlets such as H&M, Tesco, Arcadia and Debenhams. Employees routinely work a 14 hour day. 8 hours are paid at the normal rate, two hours overtime, and the rest is unpaid labour. Despite a legal entitlement to sick leave, workers are routinely verbally abused, publicly humiliated, or docked pay.

The treatment of a female employee, Taslima Aktar, caused a scandal. Management repeatedly refused permission for sick leave to her when she was ill and she continued working. She then died at her sewing machine of cardiac failure following “severe respiratory distress”. The employers took her to hospital but later, her co-workers,  leaving the factory, found her body stowed away by management near the factory gates. “This is how little they value our lives … We know the same thing can happen any day, to any of us.” (The Grind, 15 December 2016.)

Such conditions drive the workers to continue to struggle for unionisation. Internationally, garment workers need to offer solidarity and fight for better conditions for workers everywhere.

Strike action in the form of a hartal, or general stoppage, has become increasingly common over the last decade or so. It is said to be born of armed struggle against both the military rule of Pakistan in 1971 and the imperialist countries that supported it.  Among the rural peoples of Bangladesh, militant struggles continue against the destruction of the local environment and the livelihoods of the rural poor by multinational companies eager for minerals and government projects.

The Rampal power station project will potentially destroy world heritage mangrove forests with devastating consequences for the region. A protest was held in Bangladesh on the 7 January 2017 and across the globe. A ‘Global Day of Protest’ saw demonstrations of solidarity in the US, UK, Netherlands, Germany, Australia, Indonesia, India, Nepal, Germany, Norway, Finland, Italy, France, Canada and South Korea.

In November, a grand rally against the power plant had been organised in Bangladesh by the National Committee to Protect Oil-Gas-Mineral Resources, Power and Ports where the global day of protest was announced. They called for a hartal to go ahead on January 26 “if the government does not stop the construction of the plant.”

The hartal has been widely publicised in the Bangladeshi media, demanding that the government cancel the Rampal project. Professor Anu Muhammad, National Committee member and secretary, has said that, “As many as 50 million people of the country’s coastal areas will be vulnerable to natural disasters if the Sundarbans is destroyed”.