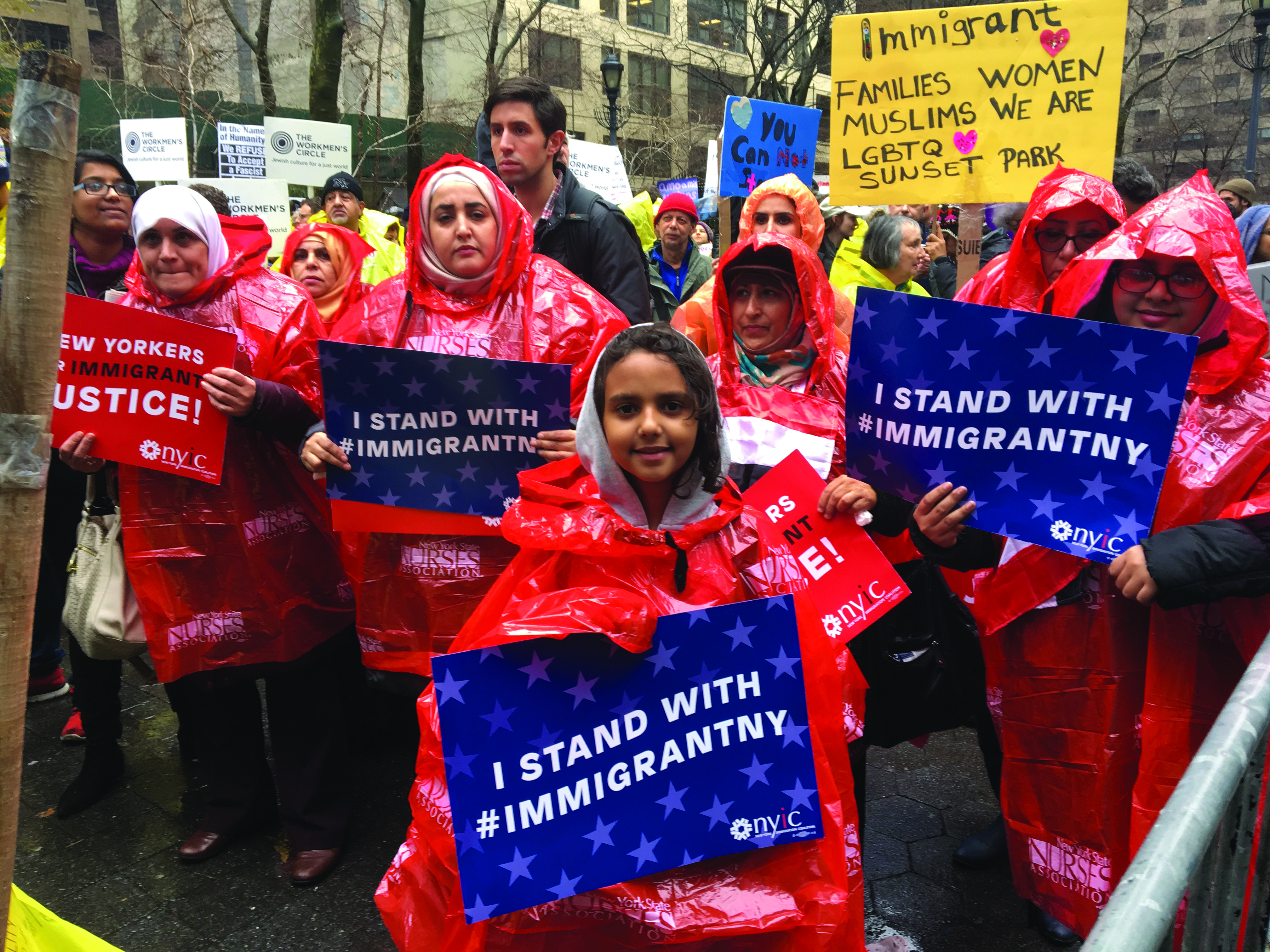 January 26 – Donald Trump is moving rapidly to fulfill many of the reactionary promises made during his presidential campaign. On the fifth day of his presidency, he signed orders giving the green light to start building a “wall” on the Mexican border, stripping “sanctuary cities” of federal funds, adding 5,000 more border patrol officers, and tripling the number of Immigration and Customs Enforcement (ICE) officers while empowering them to “remove those who poses a threat to public safety.” He is also enacting a de facto immigration ban on Muslims by stopping visas from six different majority Muslim countries. It has been reported that he will drastically curtail the existing refugee program – particularly heartbreaking with the current situation in Syria.
Trump is sending a clear message against our immigrant brothers and sisters, and it is time to activate the resistance. He has repeatedly promised to deport two to three million undocumented immigrants, threatening to do in months what took the Obama administration eight years!

Trump claimed his administration would focus on deporting criminals, gang members, and drug dealers but to reach that number he will need to cast a much wider net, redefining the concept of criminal and undermining the basic right of due process with a massive, relentless escalation. But even including everyone who ever had a parking ticket there aren’t enough people for ICE to go after!

This is why Trump’s order says that a priority target will be people who have “engaged in fraud or willful misrepresentation in connection with any official matter or application before a government agency.” As The New York Times said today, this would “essentially include any undocumented worker who has signed an employment agreement in the United States.” If Trump keeps his promise, he will need to go back to the tactics used during the Bush years with workplace and neighborhood raids that rounded up thousands of workers at car washes, meatpacking plants, and grocery stores.

Considering the current climate, this approach could spark massive resistance, especially in the key “sanctuary cities” like New York, Chicago, and Los Angeles. It would not be the first time that overreaching by the Republican Party against immigrants led to a tremendous upheaval in society. In 2005, the Republican-dominated House passed H.R. 4437, the Sensenbrenner Bill, targeting all undocumented workers for deportation and criminalizing anyone giving them assistance.

This led to one of the biggest waves of mass demonstrations in U.S. history, culminating in the historic “Day Without Immigrants” on May 1, 2006. This included strike action that paralyzed important sections of the economy, including the port of Los Angeles. This courageous movement stopped H.R. 4437 and pushed back anti-immigrant attitudes, but the unions tragically failed to bring the native-born working class out alongside immigrant workers, leaving them isolated. Through workplace raids, especially in industries where organizing drives were underway, many were deported, the movement was broken down, and the demand for “equal rights for all workers” was temporarily defeated.

The Democratic Party, at the time, tried to divert the movement away from the streets and – while promising a “comprehensive immigration reform,” including a “path to citizenship,” during Obama’s 2008 campaign – they failed to deliver, even when the Democrats controlled the presidency and both Houses of Congress. Under Obama, the Democrats then ramped up deportations to historically record levels and helped create the infrastructure that Trump will now use to go even further.

Fighting for the Future

But while Trump wants to implement his agenda in a hurry, this is not the same country it was even a decade ago. A new generation has been radicalized and galvanized into struggle by the immigrant Dreamer campaign, Occupy, the Fight for $15, Black Lives Matter, and the recent victory of the Dakota pipeline struggle. Millions responded last year to Bernie Sanders call for a political revolution against the billionaire class.

Trump’s agenda can be defeated, but it will take more than protests and demonstrations if we are going to win. This time, native-born workers and young people must come out in active solidarity with immigrant workers. The unions have a crucial role to play; not only organizing key workplaces but also calling mass meetings where workers can discuss, plan, and organize nonviolent civil disobedience actions to slow down the ICE machine, including strike action. Networks are already being built in a number of cities to prepare mass nonviolent civil disobedience to resist the deportations.

Defending immigrants’ rights is not only a question of fairness or justice. Millions feel threatened by Trump’s attacks on women’s rights, workers’ rights, and environmental protections. Trump knows he will face massive opposition and wants to win quick victories. A defeat of one struggle will send a wave of demoralization to all our movements. We can’t allow even one step back! The right-wing agenda can be defeated but only if all of us unite in solidarity and build our social power, the strongest force of humanity.