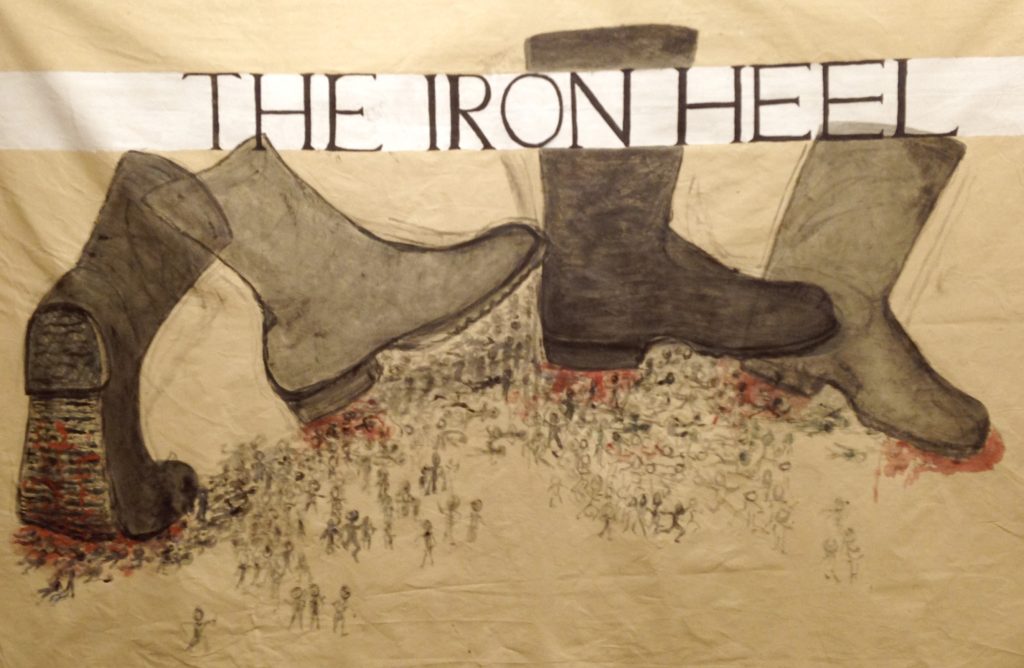 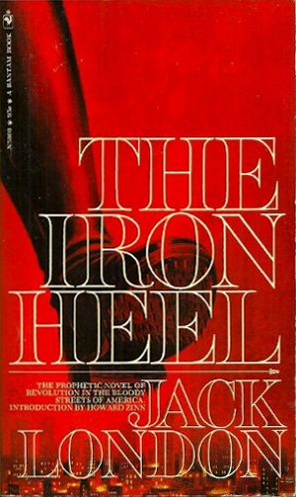 Jack London, the socialist author, died one hundred years ago on November 22, 1916. Probably his most well-known book, The Iron Heel, describes an epic struggle against brutal capitalism. Although fictional, contemporary events form the backdrop. The book was published in 1907, two years after the first Russian revolution was defeated. U.S. workers were joining trade unions. Big strikes took place, with the private security company, the Pinkerton Agency, infiltrating unions and recruiting thugs to violently attack picket lines. Rail union organizer Eugene Debs led the Socialist Party, receiving 88,000 votes for president in 1900, dramatically increasing this to 901,000 (6%) in 1912.

The Iron Heel describes the build-up to revolution in the USA and the ruling class’s vicious response to crush it in blood. Its central fictional device is a memoir, the Everhard Manuscript, by Avis, a professor’s daughter who marries The Iron Heel’s key character, the socialist leader Ernest Everhard. In the world of the book, her manuscript (which covers the years 1912 to 1932) was hidden and found centuries later. By way of footnotes, inserted after her manuscript is discovered, London makes clear that socialism eventually triumphed – some three hundred years later.

The book exposes the nature of capitalist society and powerfully argues for socialism. Avis initially believes the myths of capitalist justice and democracy until Ernest suggests she investigates the story of a destitute man, named Jackson. He lost an arm in a mill “accident” while exhausted, trying to save a machine from damage. The mill owners, management, foremen, lawyers and newspapers conspired to hide the truth and deny him compensation. He lost his job, too.

The contrast between Jackson’s poverty-stricken family and the bosses’ families, living off company profits, shakes Avis’s beliefs to her core. Ernest shows how capitalism works through discussions with academics, bishops, small and medium businessmen, and farmer political representatives. The oligarchs, or plutocrats – directors of the huge corporations controlling the economy, government, law, universities and the press – squeeze these middle classes. Some decide to join the working-class struggle although most continue to side with big business.

Ernest is invited to lecture to the Pacific coast’s select club – the wealthiest, most powerful “lords of society.” Although this seems too far-fetched a fictional device, it was based on Jack London’s own experience at just such an event. As the evening’s arguments roar to a climax, the owner of the mill where Jackson lost his arm speaks coldly and deliberately as he points at Ernest: “Gentlemen, there stands the bear and your buzzing has only tickled his ears… The bear has said he will crush us. What if we crush the bear?… We will not reply to the bear in words. Our reply shall be couched in lead. We are in power. Nobody will deny it. By virtue of that power we shall remain in power.” This Oligarchy is the iron heel that will stamp on working-class organisations threatening their capitalist system. Missing from the story is much discussion between Ernest and trade union and socialist activists. What strategy and tactics were needed to defeat the plutocrats? However, there are plenty of references to workers’ struggles and developing socialist organisation, including internationally. War between Germany and the USA in 1912 is stopped by an international general strike – unlike in real life in 1914, when the mass social-democratic parties’ leaders backed the ruling classes, betraying their pre-war promises.

The second part of the book describes revolution and counter-revolution. Acute economic crisis leads to a general strike. Leaders of key trade unions do a deal giving their members significantly higher wages on condition that they break with other unions and stop further united action. Meanwhile, a strikebreaking army (the Mercenaries) is recruited from the unemployed.

Picket lines are machine-gunned. A socialist printing house is set on fire and books burned by a mob waving the American flag, singing patriotic songs. London calls them the Black Hundreds, the same name as murderous, extreme nationalist and anti-Semitic gangs operating in tsarist Russia. Fascists and agents provocateurs unleash riots and destruction, providing an excuse for regular troops to be called in to ‘restore order’. Workers’ leaders are imprisoned and executed. Conscription to militias is ordered, and they are sent to other states to suppress strikes.

Defeated in industrial action, workers turn to a political response, electing 50 socialists to Congress. However, a bomb is set off in the chamber and soldiers rush in to arrest them. Centuries later, papers are discovered revealing the police agent responsible. As a description of the Nazis’ advance to power in Germany 25 years later, London was uncannily accurate.

Despite the Oligarchy’s huge forces, socialists continue to organize in illegal underground cells and fighting groups – anticipating the second world war resistance against Nazi Germany and the regimes collaborating with it. A desperate struggle against undercover agents sent into their midst is matched by their own agents sent into the Mercenaries and other enemy organisations.

In the fictional 1917, the dictatorship deliberately instigates a premature uprising in militant Chicago, before workers elsewhere are ready to take action. The most oppressed, downtrodden masses, the ‘people of the abyss’, try to take over the city and are mown down with machine guns and shells. This echoes the July Days in Petrograd in the real 1917, where only the intervention of the Bolshevik Party prevented a defeat on the scale that London described.

Avis and Ernest Everhard do not survive to see the socialist society they strove for. But Jack London makes clear that capitalism was eventually swept away and a far superior society built in its place.

I first read this book as president Salvador Allende’s left-wing government in Chile was carrying out big reforms. In the early 1970s, left-wing Labour MPs and their international co-thinkers pointed to this as a model for “democratic socialist revolution.” But a U.S.-backed coup violently overthrew Allende’s government in 1973, rounding up socialists and trade unionists in the national football stadium, torturing and executing thousands. That convinced me to join Militant, forerunner of the Socialist Party. It had repeatedly warned of that terrible development unless the working class was mobilized to take all power from the capitalist class. 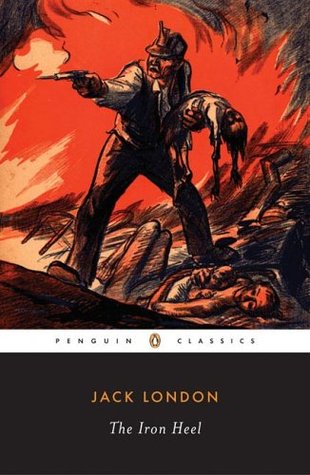 Re-reading the book, it is striking how accurately London predicted many 20th century developments: capitalist crisis, revolution, fascism following its defeat, dictatorship, and the failures of the social democratic leaders. In the 21st century, its message is just as relevant. Financial Times columnist, Martin Wolf, recently wrote, ominously: “Consider the disappointing recent performance of global capitalism, not least the shock of the financial crisis and its devastating effect on trust in the elites in charge of our political and economic arrangements. Given all this, confidence in an enduring marriage between liberal democracy and global capitalism seems unwarranted. So what might take its place? One possibility would be the rise of a global plutocracy and so in effect the end of national democracies” (August 30).

Although it does not take much imagination to see a Donald Trump-type figure as a future dictator, the working class today is potentially far stronger throughout the world than during Jack London’s life. Many of the middle classes he described are now organised in trade unions themselves. Studying the lessons from workers’ struggles can help ensure socialist victory, ending capitalist plutocracy’s exploitation and war. We should be confident his optimistic prediction of a future socialist society can be achieved much sooner than he forecast.