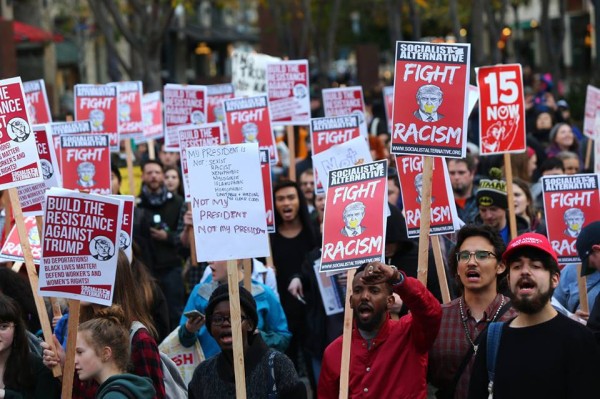 Inauguration protests can serve as a launching pad for a massive grassroots resistance to Donald Trump’s new administration which can push back his agenda. But this will require an active ongoing mobilization linked to a strategy of independent grassroots struggle.

Donald Trump is on a collision course with millions of people. He’s threatened to deport 2-3 million immigrants and to target Muslim immigrants for “extreme vetting.” Women’s reproductive health, democratic rights, and workers rights are all under threat. People are understandably afraid. But also, huge numbers of people are prepared to resist.

Trump’s agenda of hate and greed can be defeated by a strong enough movement centered on the social power of working people (as we explain here). Let’s not forget that previous generations have faced down and defeated war-mongers, hate-mongers, slave-owners, and billionaires, and they won.

Trump’s administration already faces a crisis of legitimacy. His election victory was anything but resounding. Clinton won the popular vote by 2.9 million votes and barely 25% of eligible voters actually voted for Trump. On top of this, Trump is notoriously thin skinned, erratic, and he is not a hardened ideologue. He can be rattled and forced off course.

Trump is gearing up for a 100-day agenda that is intended to deliver a demoralizing blow to his opposition. We can’t wait until the 2018 elections, and we can’t rely on the out-of-touch corporate Democratic establishment. That’s why, on January 20 and 21, we need to inaugurate a powerful resistance from the grassroots and make visible that Trump has no mandate for his agenda of hate.

Mass protests have been an indispensable part of every progressive struggle in history, from winning the eight-hour day to smashing Jim Crow. Mass protests provide an easy entry point into activity for thousands of people and raise the confidence and fighting spirit of movements by visibly demonstrating the depth, scope, and size of opposition.

Mass protests can also send a warning to the new administration. We want Trump to worry that if he proceeds with his agenda against immigrants, women, Muslims, and workers’ rights, then he will provoke even further struggle. Moreover, we want him and the entire establishment to worry that working people are gaining the confidence to take even further independent and radical action.

When movements are strong enough, even the Republicans have been known to cave under pressure of protests. Under Richard Nixon, movements mushroomed and the Vietnam War was ended, abortion rights were won, environmental regulations, and more were conceded. At the time, the ruling class feared a deeper radicalization – or even revolution – could take place if they didn’t make concessions to the protests.

Of course, protests aren’t enough on their own, and there is a long history of using mass protests as a mere safety valve for discontent, but not really connected to a strategy of mass grassroots struggle.

Past successful social movements didn’t rely on the Democrats or elections, but on applying the social power of millions of people through radical tactics that involved large numbers of people like mass direct action, boycotts, occupations, walkouts and strikes. The refusal of soldiers to carry out orders in Vietnam, combined with the resistance of the Vietnamese themselves, widespread student strikes in the U.S. and mass protests, made the war impossible to continue. Jim Crow was smashed through active mass boycotts, sit-down protests, and other mass direct actions. The labor movement won major gains through strikes, factory occupations, and solidarity action in the 1930s and ‘40s.

If Trump’s administration is determined to pass its agenda, then we will need a mass movement prepared to take similar radical measures to build as determined a resistance today.
Socialist Students is calling for a student walkout on January 20 as a step in that direction. For more information about the student walkout, go to SocialistStudents.net. There will also be protests all over the world in solidarity with the protests in the U.S. (see page 5). Mobilizing as many people together in a visible show of opposition with clear demands on January 20 and 21 will be a valuable starting point for building a new force that can defeat Trump, the right, and the entire corporate establishment.

Within hours of Trump’s victory on November 8, Socialist Alternative branches around the county helped initiate protests that saw as many as 40,000 people come out on the streets on November 9.

Many people have asked us how to get involved beyond protesting. Inevitably, this question poses larger strategic issues about how to build movements – and about what kind of organization we need.

Socialist Alternative seeks to bring together working people and young people who agree that we need fundamental change into a common organization.

We seek to raise the confidence of working people by helping to win victories that make a difference in people’s lives. We also elaborate a program that starts from from the immediate issues facing working people and points to the need to get rid of the capitalist system – the system which breeds people like Trump. We seek maximum unity of all forces who want to fight the right while continuing the debate about how to win victories and change society.

Concretely, everyone who opposes Trump’s agenda of hate and greed should stand shoulder to shoulder on January 20 and 21 in solidarity. But to develop unity even further, the anti-Trump resistance needs democratic structures at the local, regional and national levels to work out the most effective approaches for building the resistance through organized discussion, debate and decision-making.

We argue that movements against the right are strongest when they rely on the independent power of working people and are independent of corporate politics, and particularly the Democratic Party.

We welcome the support of genuine progressive Democrats who offer real support in building the widest possible unity in action in defense of immigrants, Muslims, women, and workers. But we disagree with directing the energy of movements into building the Democratic Party.

The Democratic Party was never a party of working people. It has always been a party representing the interests of big business. We believe the power of movements resides in our numbers and social power, particularly the social power of working people, not our ability to morally persuade corporate politicians. We campaign for a new party of the 99% to help build our struggles, and to run our own independent candidates that are accountable to our movement, not the donations of big business.

Defeating Trump’s agenda would massively raise the confidence of working people to fight for other demands including a $15 federal minimum wage, single-payer health care, an end to mass incarceration, and tuition-free college. But victories under capitalism, as in the past, can be reversed. Globally, capitalism faces a historic crisis that the U.S. cannot escape. The world economy faces an epoch of sluggish growth, while wars, social conflict and environmental catastrophe threaten to engulf the planet. We believe the fight against the right must be part of building an independent movement of working people to fundamentally transform society along socialist lines.

If you agree that we need an active campaign to fight Trump along with independent mass movements, a new party of the 99%, and a socialist transformation of society, then you should join Socialist Alternative today.