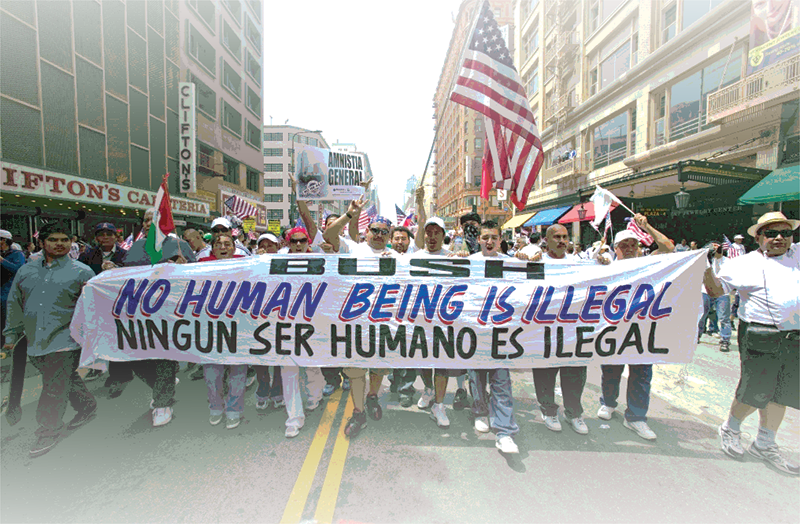 Attacking immigrant workers with vile racist language and the promise to build a wall along the border were mainstays of Donald Trump’s campaign. Now Trump is threatening to ramp up mass deportations in his first 100 days in office. His “Contract With the American Voter” states:

In addition, Trump has threatened to cancel the DACA program which Obama brought in to remove the threat of deportation from 750,000 who came to the U.S. as small children.

This is not the first time the right has gone on all-out assault on immigrants. In 2005, during George W. Bush’s administration, “The Border Protection, Anti-terrorism, and Illegal Immigration Control Act of 2005” (H.R. 4437) was passed by the Republican-dominated House of Representatives. This infamous legislation contained a host of vicious, reactionary measures aimed at immigrants, including militarizing the border, criminalizing undocumented immigrants and anyone who helped them, and building a border wall. A true mass movement arose in opposition and succeeded in making it politically impossible for H.R. 4437 to become law. A look back at how this struggle developed is relevant to the movement that will need to be built in the coming months to fight Trump.

In the spring of 2006, a powerful mood of anger at H.R. 4437 galvanized millions into mass demonstrations in cities all over the country. Some of the biggest marches in April were counted in the hundreds of thousands, and two million marched on an April 10 nationwide day of action. Large immigrant organizations, the Catholic Church, and Spanish radio DJs were involved in organizing and leading the actions, but these organizations were surprised by the size of the response from working-class Latino communities.

As the movement developed, it became more radical and went beyond calling for repeal of H.R. 4437 to rejecting the second-class status being proposed by corporate politicians backing “immigration reform” and demanding immediate legal status for all workers. At this point, the movement had moved well beyond what was acceptable to the Democratic Party, the alleged defender of immigrants’ rights.

When a call was made for a one-day nationwide strike and boycott, dubbed the “Day Without Immigrants,” the more conservative elements of the leadership of the movement, as well as Democratic politicians tried to put on the brakes.

Despite the campaign that was waged against the idea of a strike, May 1, 2006 was a historic day and an awe-inspiring success for the movement of immigrant workers. Millions joined marches in large cities and small towns across the country, including an estimated 400,000 in both Los Angeles and Chicago. Hundreds of thousands of workers went on strike and paralysed important sections of the economy in many areas and the port of Los Angeles was shut down. In building and carrying out the first national political strike in many decades, the immigrant rights’ movement revived May Day in the U.S. as the international day for workers.

The mass movement of 2006 not only stopped H.R. 4437 but also helped to push back anti-immigrant attitudes in society. It did not, however, succeed in winning “equal rights for all workers” which was one of its key demands. Crucially, the wider native-born working class did not take action in support of the movement despite the sympathy of many. This allowed the ruling class to isolate, wear down, and ultimately savagely repress the movement – particularly through targeted Gestapo-like mass deportations of Latino workers who were unionizing, as in the meatpacking industry.

Today, after eight years of Obama promising reform but simultaneously raising deportations to previously unseen levels, immigrant communities are facing the possibility of a severe increase in repression with Trump’s election. The president-elect’s plan on immigration echoes much of H.R. 4437. Like the House Republicans of 2005, Trump seeks to attack immigrant workers to divert anger from the failure of capitalism to provide decent jobs for million of working-class people.

This time, Trump must be met by mass resistance in which the labor movement plays a decisive role alongside all of the other people targeted by his vile agenda. People of color, women, LGBT people, immigrants, and all working people and youth face extraordinary dangers from a Republican-controlled congress and a Trump presidency. Only the maximum unity and the willingness to use a range of tactics including mass civil disobedience and strike action will be able to stop Trump. There can be absolutely no reliance on the Democratic Party or any section of the corporate establishment. The Democrats, as in 2005, will be opposed to the only strategy that will work: mass mobilizations of working people. But, if our movements succeed in dealing a decisive defeat to Trump on this key part of his agenda, we can force him on the defensive and cripple the right-wing onslaught.