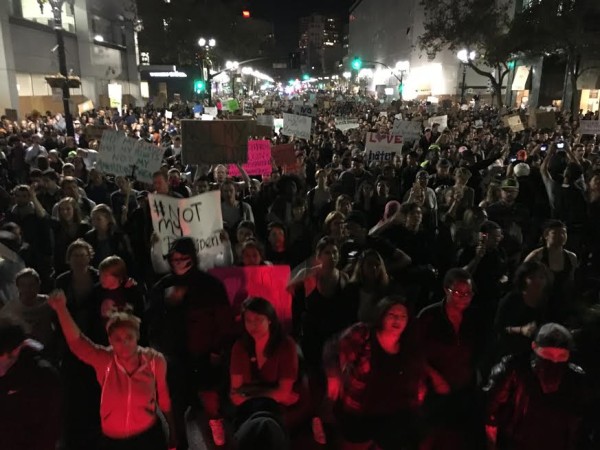 The unthinkable has happened – Donald Trump has won.  Further, the Republicans have seized control of both chambers of congress. They are planning to unleash a storm of attacks against the most vulnerable in our society. This cannot stand.  We need to stand as one and revive the solidarity in the old labor slogan, “an injury to one, is an injury all.”  We need to build the fightback to Trump and the Right.

Within hours of Trump being elected, Socialist Alternative with Socialist Students and Movement for the 99% put out the call for mass protests across the country to unite against sexism and racism and to begin building the movement against Trump and the the billionaire class. In less than 24 hours nearly 40,000 people answered our call!

The numbers of people – mostly young people – who attended in each city is electrifying: New York City had 10,000 people; Philadelphia 6,000; Boston 10,000; Seattle 6,000; and Oakland 5,000.  Our protests were a top story on newscasts across the country and internationally – from CNN to The Guardian.

This is only the beginning.

Plans are underway for huge nationwide protests around Trump’s inauguration on January 20th and 21st to send a clear message that we reject his right-wing agenda of bigotry and pro-corporate policies.  We need to build a grassroots movement against threats to escalate mass deportations of immigrants and a clampdown on muslim communities, among other attacks. Socialist Alternative will be at the forefront of building these demonstrations and organizing broad community coalitions to stand united against bigotry and hate.

But to challenge Trump’s agenda, we need your help.  We need the millions of people who stood for Bernie’s political revolution to join in building an independent grassroots movement that can stand against fierce attacks from Trump and the Right.  We need to raise $10,000 in the next week to begin building for the Trump inauguration protests being planned across the country.  Please contribute $25, $50, or $100 today! The Battle of Cable Street: Lessons for Combatting the Far Right