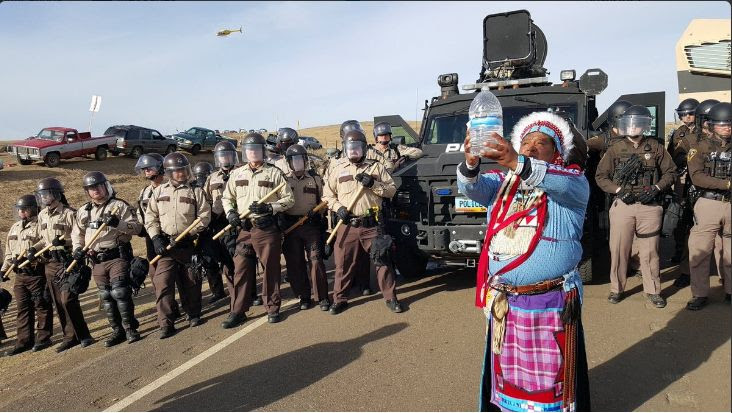 Thursday in North Dakota, a police force backed by corporate paramilitary agents and armored vehicles moved against indigenous people and other activists courageously protesting the Dakota Access Pipeline. Organizers were beaten, maced, shot with rubber bullets, threatened with automatic weapons, and more than 100 arrested for having the audacity to stand up and protect indigenous treaty rights, the region’s watershed, and the climate.

“This is a war zone!” declared a filmmaker at Standing Rock, who had previously reported on the ground in Iraq. Native News Online noted, “those arrested and detained are not allowed to post bail. Government officials have stated that they will no longer communicate with those protesting the Dakota Access Pipeline.”

Authorities are responding to the biggest united action of Native American tribes in modern history with militarized repression, with the support of North Dakota’s governor and attorney general. Meanwhile, President Obama has refused to condemn this brutal attack on civil rights, much less taken practical steps in defense of protesters. This stunning failure to act is a damning indictment of Obama’s administration, as well of as North Dakota authorities and the Democratic Party leadership.

A month and a half ago, with the leadership of indigenous activists who spearheaded the introduction of Indigenous Peoples’ Day in 2014, I brought forward a resolution in the Seattle City Council calling for solidarity with Standing Rock. The statement, which condemned past violence and called on North Dakota authorities to drop all charges against protesters and journalists, was passed unanimously. But our demands and the voices of so many others in the U.S. and internationally have gone unheeded.

I again join with indigenous people, environmentalist activists, progressive labor unions, and the broader left in condemning these abominable acts by North Dakota authorities, and call for an immediate end to political repression and the release of arrested activists.