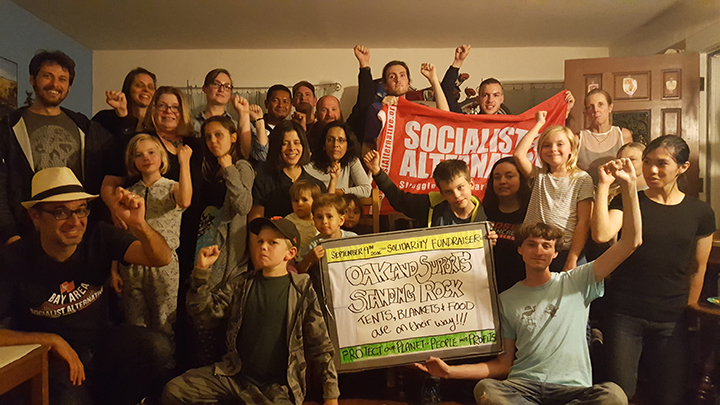 When a people’s most sacred sites, land, and water, comes into the cross hairs of capitalist greed, we as human beings, as socialists are obligated to stand with them and fight back.

More than four thousand people, including people from over 100 tribal nations, have traveled to the Standing Rock Sioux Reservation in North Dakota to stop the construction of the Dakota Access Pipeline, or the black snake, as local tribes call it. The pipeline is financed by the world’s largest banking institutions, including Bank of America, J.P. Morgan Chase and Goldman Sachs, and would pump half a million barrels of Bakken crude oil daily, some of the dirtiest in the world from North Dakota to Illinois. It would cross under the Missouri River, which ultimately supplies 17 million people with drinking water.

Already, sacred burial sites have been desecrated, Native people have been mauled by dogs and pepper-sprayed by the pipeline company’s private security firm, brutal actions consistent with the history of genocide against native peoples in this country.

The pipeline runs through tribal land that past treaties promised for native peoples “for as long as the grass shall grow and the water run.”

”The federal government continues to ignore and violate past agreements and seeks to keep the “Indian problem” out of sight and out of mind. Their goal is to continue to steal native lands as soon as they become attractive for U.S. big business. But the struggle against the Dakota Access Pipeline has been anything but quiet. Democracy Now’s video covering the clash between Native protectors and dogs has already been viewed on Youtube 13 million times and was also picked up by some mainstream news. For the first time in decades the struggles of native peoples have gained a huge and sympathetic audience across the U.S.

The fierce determination of native people, environmentalists, and other movements who have combined at Standing Rock is already making an impact; Obama has been forced to instruct the Army Corps of Engineers to halt construction near the river, until they can re-evaluate the legality of the permits it previously issued for construction.

While this is a real victory, the ruling class’ intention is not to halt the pipeline, but to halt the convergence of people and to halt this protest against corporate America’s destruction of lives and the planet in its greed for profit.

We cannot rely on the Democratic Party to defend indigenous people’s rights or the environment. It’s revealing that Clinton, who in her platform claims to support native people’s rights, has received over $6.9 million from the fossil fuel industry and has been silent on the issue. It’s clear we need a new party of the 99% that will give political expression to these struggles

Cars and vans bringing supplies of food and tents are arriving at Standing Rock from all over the country. This struggle is not in an urban area and so these resources are vital to sustain the thousands of people camped there for the long haul. Both the Red Warrior Camp and the Sacred Stone Camp are calling for people from all over the world to stand with them and fight.

The Bay Area branches of Socialist Alternative has answered the call. We created a Gofundme account and held a fundraiser which together has raised nearly $1,500 for our Sioux solidarity caravan. We have collected tents, sleeping bags, diapers, and food which we will be delivering to North Dakota.

As Kshama Sawant has put it, Standing Rock is the front line of ecological justice in the U.S. These protests are about protecting the rights of some of the poorest people in the country to clean drinking water, to land and to a future that is not owned by the big banks. It’s also a stand in defense of the environment on behalf of all working people. It points to the need to transition away from fossils fuels once and for all and to transition away from an economic system that puts profit above human need. This is why we are standing in solidarity with the people of Standing Rock in defiance of the black snake, of capitalism, and of corporate empire.

Join us in traveling to Standing Rock! We’ve already scored a victory with Obama being forced to temporarily halt construction, but we know this is only a brief respite in the battle. We need as many people as possible to flood the prairies to stand for indigenous rights and the environment!