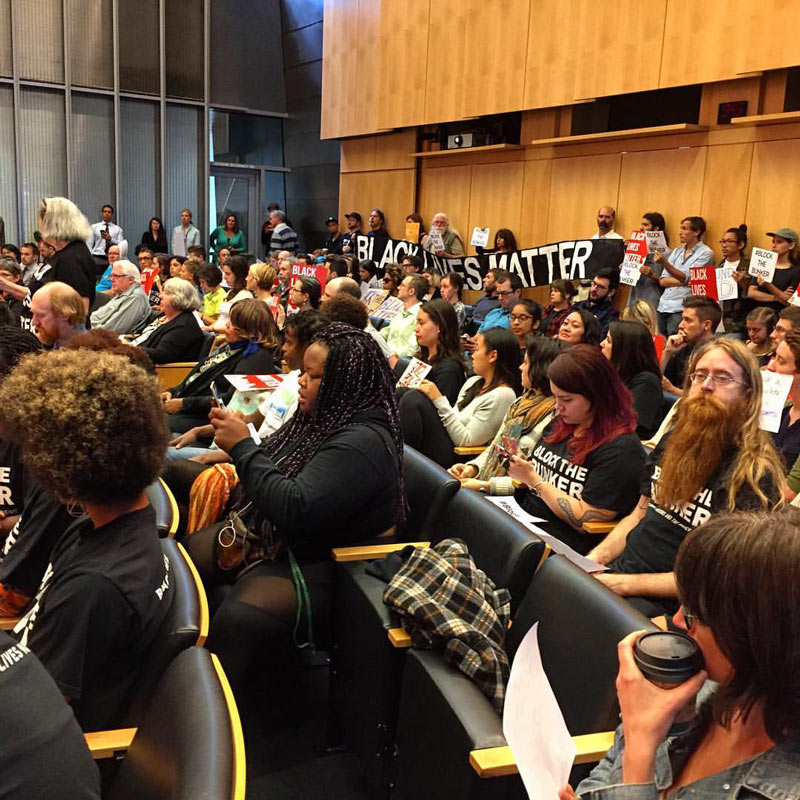 The Black Lives Matter movement is shaking the country, but the majority of the Seattle City Council wants to build the most expensive police precinct in the U.S.

The Seattle political establishment is trying to build a $160 million police precinct against mass community opposition. If they are successful, it will be the most expensive in the country: bomb-proof, with three underground floors and a full shooting range. On Monday August 15, 400 protestors packed City Hall during the latest City Council meeting where the council was to vote on a resolution in support of building the bunker.

There was unanimous  opposition from the speakers, but that did not stop the city council from voting through a resolution moving the process forward to build  the bunker. They used an emergency suspension of the rules to vote on the resolution same-day. No reason was given for what the emergency was, but it was clear to the protesters – this was an attempt to streamline the process of getting this sign of police militarization on fast track and  the council’s one chance to vote on this without Kshama Sawant present as she was on vacation.

Nikkita Oliver, a civil rights lawyer and Black Lives Matter activist asked the City Council, “Why would you spend $160 million on a new police precinct when you know we have houseless folks, hungry folks, youth that need education and bus passes?”

The huge boom in Seattle’s tech market has led to mass displacement and a housing crisis in Seattle. Long-term residents of Seattle, especially people of color, are getting pushed out daily. The attempt to build this police bunker is coming at a time when the city establishment has officially recognized homelessness as a state of emergency. But the money allocated didn’t reflect the sentiment of the words. As Socialist Alternative member Sasha Somer commented to the City Council on Monday:

“Kshama Sawant proposed $10 million for 1,000 shelter beds and social services as a first step towards addressing the homelessness crisis in this city. And I distinctly remember you, Sally Bagshaw, saying that you would love to spend $100 million on shelters, but that you didn’t support the $10 million that we are demanding. This is the epitome of how this council is functioning. You support in the abstract the things we need like housing, jobs, and education, but when it comes down to where you want to put the money, it’s not there.”

Every speaker was outraged, and was acutely aware of the burning issues of the city. Gerald Hankerson, president NAACP in King County, connected this issue back to the $210 million youth jail that had been voted on 8-1 a year and a half before, with Kshama Sawant as the only opposition when he said,

“The New Youth Jail and the north police precinct. Almost half a billion dollars – that’s enough to wipe out homelessness in Seattle!”

Only about 200 were let up into the main Council Chambers, with the rest being kept in an overflow room rather than opening up council chamber doors to allow for all to attend. This was rightly seen by attendees as a political decision to stifle the voice of the mass opposition to this project. But the community, outraged by the city council prioritizing further police militarization over black lives.

“This building cannot hold the community that is speaking up against this bunker!” said Kaya Axelsson, a community organizer, moments before the hundreds of community members in the overflow room rushed up to the main council chambers and demanded to be let in.

The activists and community members, far from being a passive audience, played the role of the community’s Councilmember. Bruce Harrell, who chaired the meeting, made many threats to throw out community members for speaking too long. But when at one point, one lone racist began shouting “Only white lives matter”, Harrell, the rest of the council, and security was silent for over a minute. It was only through mass chants of “remove him!” that the man was dealt with by security. It was a whisper of how the policing priorities of the political establishment differed from that of the community they are supposed to represent.

Later, when one Councilmember, Mike O’Brien, put forward a motion to not have an emergency-vote on a resolution supporting the bunker (citing that there was no legitimate need to vote on it immediately), the community erupted in chants of, “We second the motion!” The nine Councilmembers seemed quite small in comparison to hundreds of voices filling the chambers.

Councilmember Debora Juarez, a Native American woman who, to the bafflement of much of the community, was a vocal supporter of the police bunker, was angered by the democratic engagement of hundreds of people. In a virtual Trump-ism, she said to the crowd,

“Please be respectful, because I wasn’t raised the way you were apparently raised. This is about doing my job and not sacrificing political correctness or political expediency for my career.”

To this, the crowd, taken aback, erupted in boos which turned into a chant of, “Our job is to survive the police!”

This vote showed the power of community organizing. It was clear that the Councilmembers were shaking as they voted to support this widely unpopular project.

While we can force corporate-funded politicians to side with movements on some issues through intense street-heat, the fact is that the Councilmembers (all Democrats except for Kshama) voted to support this precinct with only one exception. Many of them were elected with promises to be progressive especially on issues of racial disparities. This shows that we can’t rely on Democratic Party politicians or the corporate party behind them. Working people and people of color will need our own independent political representatives – independent of corporate cash and independent of the Republican and Democratic Parties. We need to build a new party of the 99% based on social movements to make sure our voices are heard and our representatives are held accountable.

This was the first big battle to block the bunker, but the real fight will be at the November budget meetings when the money is officially allocated.

Over the next three months, activists will have to continue to build the street heat to make it politically impossible for the City Council to put the much-needed $160 million of city money to further militarizing the police force. As Kshama Sawant said in a recent blog post,

“During this year’s budget process, Council will have the opportunity to vote on how to prioritize our City’s resources. Every year, I along with activists, human services, social justice organizations, and labor unions organize the People’s Budget movement to fight to make our city’s budget fund the urgent needs of Seattle’s working people.

Among other things, this year, the People’s Budget movement will be discussing what $160 million should pay for instead of a new North Precinct.”

Kshama Sawant, Socialist Alternative, and activists in the Block the Bunker & Black Lives Matter movements are organizing a public forum in the coming weeks as one step towards building enough public pressure to defeat this police precinct. Shaun King has already tweeted from New York, “Hey Seattle! Standing with you and #BlockTheBunker. Don’t let up.”

If victorious, this fight would have national implications and be a beacon of hope to the nationwide Movement for Black Lives. Similar to how the $15/hour victory in Seattle spurred on legislation across the country, victories can inspire movements all over.