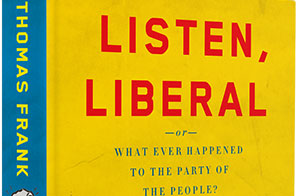 “None of them think she really means her populism,… . The Clinton Foundation has actually held meetings at the headquarters of Goldman Sachs.” – William Cohan, “Why Wall Street Loves Hillary”, Politico, 2014. In Listen, Liberal, journalist Thomas Frank condemns a shift in the Democratic Party from a perceived “party of the people” to a party representing an elite, professional/technocratic “class.”
Frank points to Jimmy Carter, who “cancelled public works projects… with the help of a Democratic Congress, he enacted the first of the era’s really big tax cuts for the rich and also the first of the really big de-regulations… [he] put the country on an austerity diet spectacularly punishing to ordinary working people… .” A Carter advisor, Alfred Kahn, said: “I’d love the Teamsters to be worse off. I’d love the automobile workers to be worse off. You may say that I’m inhuman… but I want to eliminate a situation in which certain protected workers in industries insulated from competition can increase their wages much more rapidly than the average without regard to their merit or to what a free market would do… .”

Listen, Liberal debunks the myth that Democratic policy failings are due to Republican obstructionism. In the first two years of both the Clinton and Obama regimes, the Democrats controlled Congress and could have passed any legislation they wanted to.

Frank examines Clinton’s days as President: telecommunications deregulation, the racist 1994 crime bill, “ending welfare as we know it” in 1996, NAFTA. So, by 1996, “Americans had two conservative presidential candidates to choose from.” And Frank also exposes Clinton’s bi-partisan plans to privatize Social Security toward the end of his second term.

Obama continued the economic policies of the Bush and Clinton administrations. Frank highlights the weakness and unnecessary complexity of “Obamacare”, Obama’s betrayal on the Employee Free Choice Act, etc. . “Obama could have… unwound Bush’s bailouts… stopped AIG bonuses… pushed to allow bankruptcy judges to modify mortgages… put the “Zombie banks” into receivership… and so on. Obama did none of it.”

In “Liberal Gilt”, Frank details Hillary Clinton’s role as a Democratic Party leader, as first lady, as a Senator, as Secretary of State and probable next President. Even though Frank is a fan of Sanders, he barely mentions Sanders. Frank assumed Clinton would grab the Democratic Party nomination: “We have now observed several instances of the cycle of enthusiastic idealism that propels modern Democratic politics, as well as the lagging cycle of disappointment that invariably follows… and now she gets to be the vessel of liberal hopes…  It is, as they say, her turn.”

In Defense of Marxism, 80 Years On