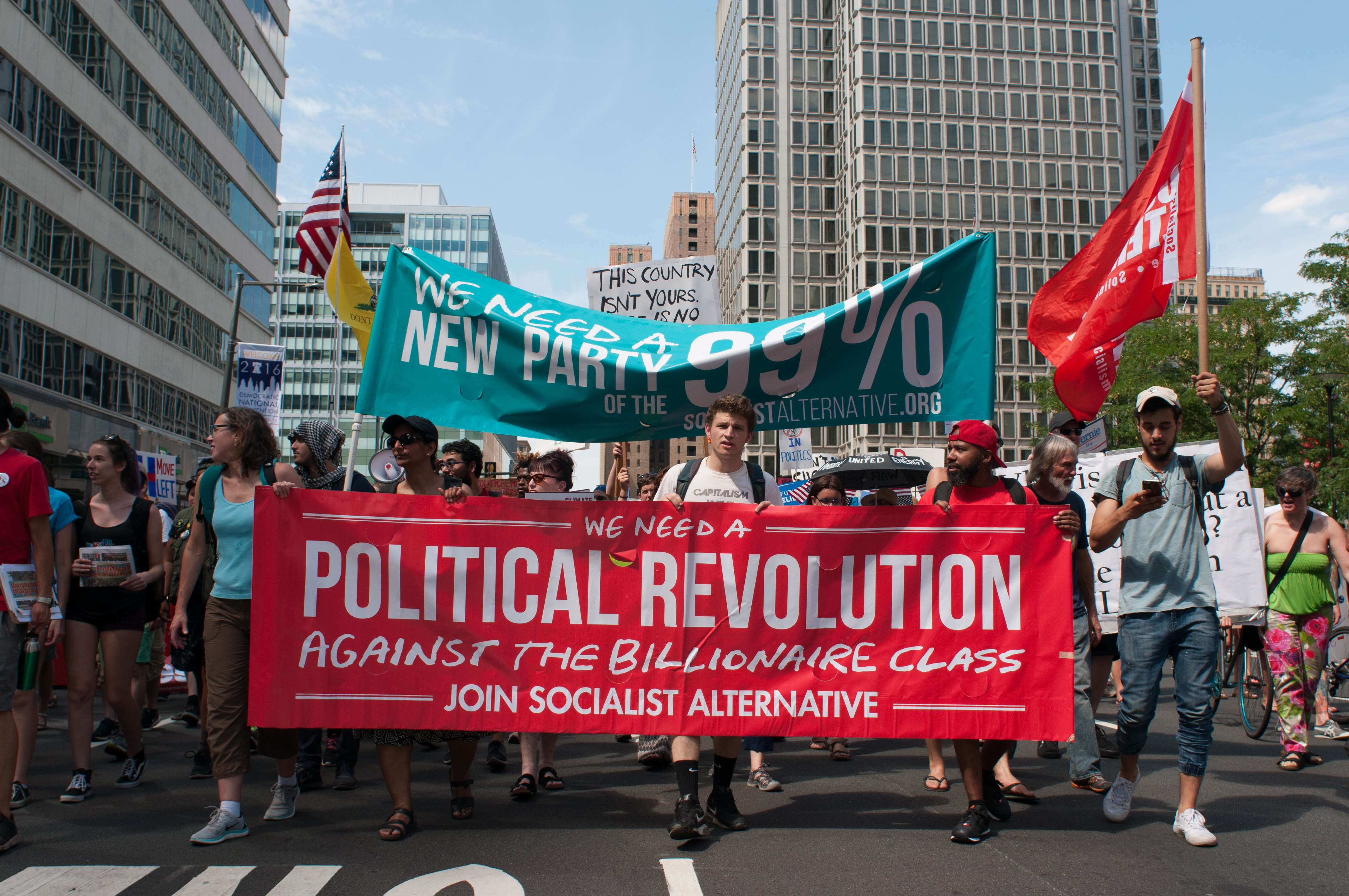 During the course of this week we will provide ongoing coverage of events inside and outside the Democratic National Convention in Philadelphia from a socialist point of view.

The Democratic National Convention is off to a chaotic start. Last week we had the spectacle of the Republican Convention in Cleveland where Trump tried to channel the ghost of Richard Nixon for a  xenophobic, racist campaign centered on “law and order”. This week, Hillary Clinton was clearly hoping to demonstrate that the Democratic base has united around her as the anti-Trump, especially now that Bernie Sanders has endorsed her.

But choosing Tim Kaine, governor of Virginia, who strongly supports the Trans Pacific Partnership and bank deregulation, undermines the “progressive” veneer which the Democrats want to project at the convention. So much for the idea of Clinton choosing someone like Elizabeth Warren!

And while people were digesting Tim Kaine, Wikileaks released thousands of emails from the Democratic National Committee which showed how the DNC under party chairwoman Debbie Wasserman Schultz systematically worked to undermine the Sanders campaign over the past year. As the New York Times said today, the emails “offered undeniable evidence of what Mr. Sanders’s supporters had complained about for much of the senator’s contentious primary contest with Mrs. Clinton: that the party was effectively an arm of Mrs. Clinton’s campaign.”

Yesterday, Wasserman Shultz was forced to say that she would resign as chairwoman after the convention and by this afternoon she had to abandon the idea of gavelling in the convention after a large number of delegates from her home state of Florida booed her in a morning meeting.

However, there were also boos this morning when Bernie Sanders spoke to a meeting of his delegates and urged them to support Clinton. The booing has continued as the convention opened whenever Clinton’s name was mentioned. Clearly many Sanders delegates clearly aren’t buying the idea that a few changes to the non-binding party platform means the corporate-dominated Democrats are being “reformed” and this is fueling plans to protest inside the convention or to stage a walkout as proposed by Movement4Bernie, Occupy Wall Street and Bernie or Bust.

Thousands marched in the streets of Philadelphia yesterday, far more than marched in Cleveland last week during the Republican convention. At least 5,000 participated in the March for Clean Energy Revolution while over 2,000 joined the March4Bernie to the convention site which was led by a banner saying “Help End Establishment Politics, Vote No on Hillary”. The lively Socialist Alternative contingent attracted a lot of support leading chants of “Hell No DNC, We Won’t Vote for Hillary!” The Los Angeles Times carried a photo of our contingent on their front page today.

Seattle socialist city councilmember Kshama Sawant spoke to a rally before the march and received big cheers when she called for a new party for the 99%, to not support Hillary and to continue the political revolution by supporting Jill Stein’s presidential campaign.

On Sunday night over 200 attended a meeting at the Church of the Advocate sponsored by Socialist Alternative and Stadium Stompers a grassroots campaign fighting Temple University’s plans to build a football stadium right next to a poor community, a clear attempt to ramp up gentrification on behalf of corporate interests.

It’s very hot in Philadelphia and it’s not just the weather; the political temperature inside the convention and on the streets is going up fast.