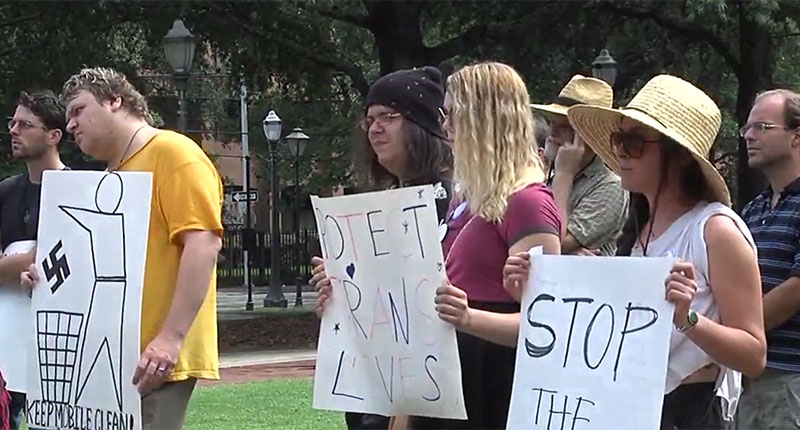 On June 18, Mobile Bay Socialist Alternative (MBSA) held a loud and proud rally against the Ku Klux Klan, who have been active in Mobile, Alabama and surrounding areas for the past year.  Local citizens have been waking to find that members of the KKK had been skulking about in the dark hours of the morning, leaving recruitment fliers on doorsteps that called for a “cleansing” of the transgender “abomination.”

The flier also references the recent bathroom debate by suggesting that trans people use a “tree in the backyard” as a restroom.  This appears to be an ominous reference to lynching people from a tree.

Following several of these midnight distributions of KKK recruitment fliers, all targeting the LGBTQ community as well as people of color, MBSA reached out to several regional and local activists and community leaders to organize a protest to boldly let the Klan know that they, and their poisonous ideas, are not welcome in Mobile.  Dozens of people attended, despite the presence of a heavy rainstorm which threatened to overshadow the event.  The event was organized to push back against the rising brazenness and militancy of the far-right white supremacist cancer, and to provide a voice and platform for people of color and trans activists.

MBSA member, Tyler Henderson, was quoted in a rawstory.org article and a Channel 15 TV story as saying, “The KKK seem to prefer to do their business in the dark and distribute these fliers in private, stalking around.  We’re going to come out in broad daylight to raise our voices and tell them that they are not welcome in our town.  They are not welcome, and they need to take their corrupt ideology back to the 19th century where it belongs.”​

Turning to white supremacy is not the way out of the pressure cooker that the white working class finds itself in.  Faced with dramatically falling living standards and increased exploitation, working-class people of all colors and genders must unite under a program of green jobs, economic justice and equality. Rather than working-class people fighting each other over a limited number of low-paying jobs and resources, we need to unite all working-class people to demand our share of the immense wealth being hoarded by the richest 1%.

MBSA urges all workers and young people in the South, and nationwide, to organize against white supremacy and work toward building an independent party for the 99%.  Already, a group called Mississippi Rising contacted us and told us we inspired them to organize a KKK protest of their own in Mississippi!

We will not allow our communities to be intimidated by the KKK with threats of lynchings, violence, racism, or homophobia.  Please support our on-going efforts to build a movement against the KKK in the South!  Please click here now to donate and/or join Socialist Alternative.