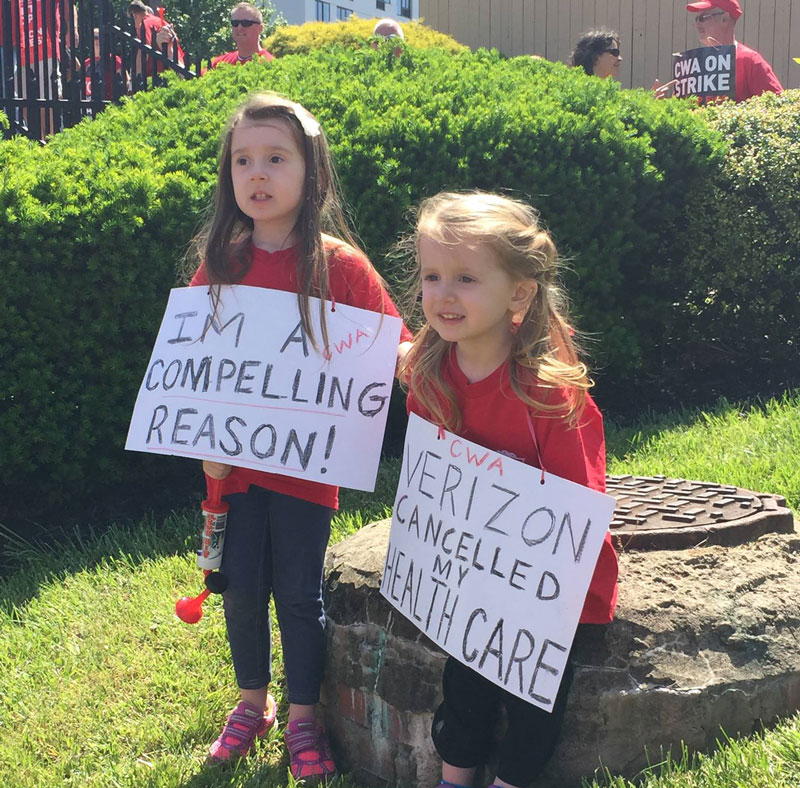 In the largest strike in the United States in half a decade, 40,000 Verizon workers from Massachusetts to Virginia, members of the Communication Workers of America (CWA) and the International Brotherhood of Electrical Workers (IBEW)have now been on the picket lines for over six weeks. The outcome of this struggle is of vital importance to the labor movement across the country. Socialist Alternative members have been out on protests and picket lines to show solidarity. Below is an interview with Jay Harrison, a Verizon worker and CWA activist in Philadelphia.

Socialist Alternative: Why are Verizon workers out on strike?

Jay Harrison: Verizon is making over $1 billion a month in profits yet claims it can’t “afford” decent living standards for its employees. We went out on strike after 10 months of negotiating in good faith with this ruthless corporation that is bent on destroying jobs and looting our communities. It has also refused to negotiate a contract with Verizon Wireless workers who recently voted to join the union.

SA: What are the main issues?

JH: Verizon is looking to consolidate offices, shut down call centers and work locations, and make more cuts to its workforce across the northeast. At the same time they have refused to hire new permanent workers forcing us to work long hours of mandatory overtime.

Their goal is to move more and more work overseas where they can pay people less than $2 a day. We understand that the workers overseas are not the enemy; they are just being used by corporations to undercut our jobs. When workers in the Philippines found out about our strike and realized that they were handling struck work they contacted the union and we sent union members to Manila to talk to workers in the Verizon facility there. When we tried to meet with those workers the company sent masked thugs armed with assault rifles chasing us through the city. That’s the kind of people we are dealing with here.

Here at home they haven’t hired any permanent workers in my job since 2003. They hire people for three years then lay them off, then they repeat this with a new batch of workers. What kind of future is there for our children? What hope of getting a decent job when you get out of school? This was once a job could work for 30 years, support your family, and retire with decent pension and in good health. That kind life is a fantasy to younger workers these days.

Verizon continues to block the organizing efforts of wireless workers and spends uncounted dollars on union busting lawyers and consultants to try to divide us from each other. They have also failed to live up to their commitments to make new fiber optic services available to all our communities; they are redlining whole cities that they deem “unprofitable.”

SA: Why is your stand also in the interests of Verizon customers?

JH: Union members at Verizon are on strike because of the working conditions we face but these conditions also have a huge impact on our ability to provide the kind of quality customer service we are trained to provide. Long waits for service, missed appointments and long hold times when you try call with a problem: these are some of the results of these corporate policies.

This company needs to make good on its commitments to build out the new fiber optic network for everyone. They need to hire and train permanent employees at home instead of moving work away from our communities.

SA: What’s the mood like among your co-workers and on the picket lines?

JH: Going on strike is never an easy choice. There are very real financial consequences. In today’s political and legal environment it may also mean losing your job. But it’s also an investment in our future and the future of our children. There are no guarantees, only what we can win from the company through struggle. So far, the strike is solid even down to the term employees that the company was really hoping to use as scabs against us. We look out for each other and we have the union.

Watching the scabs is the hardest part. We chase them down and picket them where we find them but we are restricted by the legal injunctions from any effective tactics to stop them from working. Because of that we were also holding rallies outside the hotels where Verizon was housing scabs, but the Labor Board ruled that was illegal. You can feel the anger in your stomach when they walk by, hiding behind the law and acting like it’s a joke.

We have worked hard, worked in good faith, we built and maintained this network in all weather. We have sacrificed long hours away from our families working in a muddy ditch or hanging from telephone pole in the middle of the night to restore service to our community. We are angry and determined. When we go back to work, things will never be the same.

SA: How is the community involved and what impact has that had?

JH: When we are out on the street there is a tremendous amount of support from the community. People come by the strike lines and bring us water and sandwiches, we talk to people on our pickets at the wireless stores and many of them decide not to go in. We’ve heard about many incidents where people have kicked scabs off their property or refused them access. Other unions have come out in support and many of them are making donations to our strike fund.

SA: What strategy and tactics are needed to win this struggle?

JH: We have to ask ourselves if the “one day longer” strategy will be effective in winning a contract that has any gains in it. We may be able to beat back the worst of the company’s demands, but they will just be back on the table as soon as this contract expires.

Any effective tactics like picketing the scab hotels are quickly found to be “illegal.” That begs the question: how long can we stay within the bounds of the law that is enforced in the interests of the company? How can we impact their ability to conduct business as usual? I think we need to draw on the lessons and tactics of past struggles like the Civil Rights Movement and the strike waves of the 1930s and ‘40s that built the unions. These struggles prove winning against entrenched corporate and institutional power takes tenacity, determination and even being prepared to defy unjust laws but that it can be done!