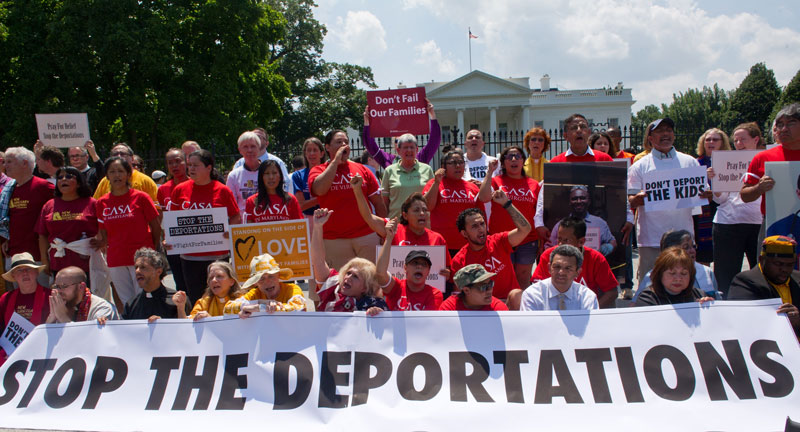 The following article was issued as a leaflet on May Day, 2016 this year.

This year marks the tenth anniversary of the inspiring mass movement of immigrants that culminated in the mass national walk-out by immigrant workers on May 1, 2016. This movement succeeded in pushing back the racist agenda of the right. It has important lessons for today as Trump and right-wing Republicans once again call for ramping up mass deportation of immigrants and for “building a wall” on the Mexican border.

The immediate trigger for the movement ten years ago was the passing of the “Sensenbrenner Bill” by the Republican-controlled House of Representatives. This bill called for deporting all 11 million undocumented workers and made anyone who helped an undocumented worker and his family a felon. The response shocked the political system, as millions of immigrants risked coming out of the shadows in the biggest wave of protest in U.S. history.

The immediate gains of the movement were significant. It reversed the political momentum of the right wing in attacking immigrants and made the Sensenbrenner deportation bill “dead on arrival.”

Unfortunately, the movement was not able to win its broader goals of full legal rights for all immigrants. This was mainly because the movement was mainly isolated to the immigrant community and was unable to mobilize the broader working class into a powerful movement to force through real reforms. The Democratic Party played a role in diverting the movement away from the streets. The Bush administration unleashed a wave of repression focused on immigrants in industries like meatpacking where organizing drives were underway.

Obama was elected in 2008 promising “comprehensive immigration reform” including a “path to citizenship.” However, despite the Democrats controlling the presidency, the House of Representatives, and having a significant majority in the Senate, Obama failed to deliver. Instead, he bailed out Wall Street and then ramped up deportations – deporting more immigrants than any president in history (Pew Research Center, 10/2/2014). Recently, thousands of women and children have been sent back to Central America, where many face the real possibility of being killed by narco gangs.

Facing growing anger from the immigrant community, and with the Democrats once again looking to build an electoral majority in 2016, Obama signed an executive order last year lifting the threat of deportation for several millions. While this was a step forward, its legality was challenged by the right, and the order was blocked by a court in Texas. This has been appealed to the U.S. Supreme Court, where a probable deadlock will result in the decision of the Texas court remaining in place. This would represent a significant defeat for undocumented workers and their families, while the rise of the populist right poses a new threat to immigrants.

Build a New Movement in the Streets

The campaign of Bernie Sanders has enthused millions of young and working people by putting forward demands that speak to their needs, such as a $15 minimum wage, single-payer health care, and free college education, while clearly opposing racism and xenophobia. The enormous response he has received, including from many young Latinos, shows the potential to build the type of movement that could achieve full rights for immigrants. Sanders has also explicitly criticized the limitations of corporate immigration reform, which would leave immigrants as second-class citizens, and he has taken on Hillary Clinton for supporting the deportation of women and children back to Central America. But he has, unfortunately, not put forward a bold, clear position for full rights for all undocumented workers.

This May 1, we should be inspired by the extraordinary show of force and sacrifice by the immigrant community in 2006. The lessons of these events, and their aftermath, should not be forgotten. Building a successful movement today means putting forward clear demands that speak to the needs of all workers, native as well as immigrant. The unions could play a crucial role, cutting across Trump’s racist appeals with a clear call for a massive jobs program and full rights for all immigrants.

Such a movement must be independent of the Democrats, who at every step loudly proclaim their sympathy with immigrants but have presided over the massive extension of deportations and detentions and are only willing to countenance reforms acceptable to corporate America.

Ten Years On: The Immigrant Rights Movement of 2006

We print below two excerpts from Justice in 2006. At that time, Justice was the name of the newspaper of Socialist Alternative.

The movement erupted on March 10, when 300,000 predominantly Latino immigrants flooded the streets of Chicago to protest H.R. 4437. This bill would turn all 12 million undocumented immigrants in the U.S. into felons. Anybody offering them any type of assistance would become felons, too. Under the law, millions of hardworking immigrants could be rounded up and jailed to await deportation. School teachers, nurses, and even the children of undocumented workers would face fines and jail time.

Politicians thought they could win some votes in an election year by using immigrants as scapegoats for the severe problems in the U.S. They underestimated the willingness of the Latino and immigrant community to organize and fight back.

Some of the largest and most energetic protests in U.S. history have sprung up in dozens of cities throughout the country: one million in Los Angeles on March 25, 500,000 in Dallas on April 9, and up to two million in over 120 cities on April 10.

Interview with May 1 Strike Organizer in Los Angeles

Jesse Díaz is a cofounder of the Los Angeles March 25 Coalition, which organized a demonstration of over one million for immigrant rights. He explained the premise of the May 1 strike:

“We have shaped the national debate through the mass mobilizations in Los Angeles, spearheaded by the March 25 Coalition. The premise for the boycott was that the American economy is heavily, heavily dependent on immigrants. When we were doing protests against the Minutemen, we encountered the idea that immigrants are a drain on the economy. But studies have shown over and over that immigrants contribute more to society than they take out.

“So I figured that the only way to prove that was to do it with the boycott and call on all immigrants not to go to work. When we saw the Port of L.A. truckers come aboard, we knew that it would be big in terms of labor. In many cases, the workers were threatened that they were going to lose their jobs, and they still didn’t go to work. So everywhere you looked, it was like a national holiday. It was like nothing that I had ever seen before. It was like magic.

“By the end of our campaign, we were seeing mobilizations take place among the people themselves. It was a mass, mass mobilization. The police estimated 500,000, but there was also a news station there who said it was between 1.7 and 2 million people, and that’s their estimation from the aerial photos.