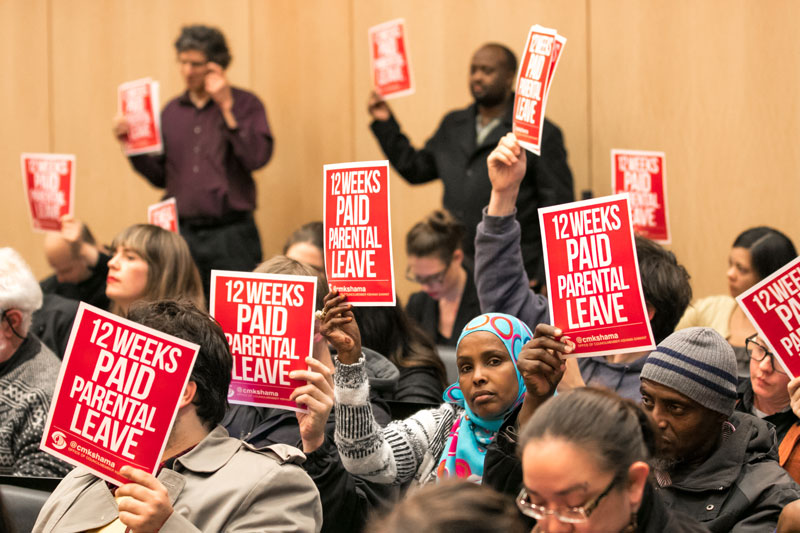 Paid parental leave has been part of the debate for working women since the 1960s, and most countries across the world have passed some form of leave for families with new babies.

In the United States, the wealthiest country in the history of the world, we still don’t have even a minimal 12 weeks mandated leave for new parents. This glaring exception has become a major talking point in the presidential election cycle.

Hillary Clinton claims she wants it, but – like so many things we need – she says it isn’t politically feasible. Time and time again, the vital programs that working people – and especially working women – need, like universal healthcare a $15 an hour minimum wage and free higher education, are pushed off as politically unfeasible. Despite studies showing how less access to education, health care, and  time off contribute to keeping women as second class citizens, we are told we should wait or accept far less – except that’s not how progress has ever been won!

Bernie Sanders has tirelessly brought many of these issues to the forefront, pointing out the shameful lack of paid parental leave in the U.S. at every televised debate. He points to the many international examples and rejects the notion that the things we need can’t happen because they aren’t popular with Wall Street.

His website features a petition for paid parental leave. Many mass movements start with petitions – though, of course, clicktivism is not enough.

In Seattle, socialist Councilmember Kshama Sawant has put forward various paid parental leave initiatives with mass public support. During a recent budget hearing, union members and activists packed the room demanding that Seattle lead the way on parental leave by setting a major precedent with progressive legislation. Disgracefully, this was defeated with the assistance of wealthy, self-identified feminists on the City Council who voted down the proposals because they weren’t “politically feasible” (The Seattle Times, 11/23/2015).

If legislation is massively popular and even conservative news outlets like Bloomberg and Forbes declare that paid parental leave is a logical, efficient way to approach a predictable life event for working people, why do politicians keep telling us the time isn’t right?

Capitalism aims to pit workers against one another, rather than arranging the economy in a way that is functional. Time off has been demonized in the highly competitive corporate world because it does not reflect a deep enough commitment to the company’s profit margin, so workers who take this time are judged poorly on their performance reviews and less likely to become eligible for raises and promotions.

Women are encouraged to “lean in” to their careers – or, in the case of tech giant Google – offered egg-freezing services for some hopeful future date when they might be offered time off. By forcing parents who crave bonding time with their newborns to either leave their jobs or take extensive unpaid time off, bosses are able to justify paying some workers – typically women – less. By not having paid parental leave, many new parents are put into financial straits by the exorbitant cost of child care.

To win what working women truly need – including universal health care, free college education, parental leave, and defending and extending reproductive rights – we have to build a mass movement. Unions who represent millions of working women can play a critical role in building this movement.

By building a mass movement with clear demands, we can leave behind spineless corporate politicians who don’t stand up for the things we need. We can push for independent working-class candidates who challenge the status quo and fight for  a world where decisions are based on human need not corporate greed – a socialist world!