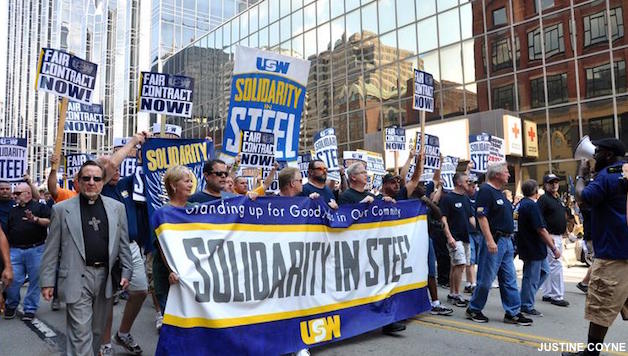 While the Pittsburgh-based Allegheny Technologies Incorporated (ATI) may use the advertising slogan of “Investing in the future,” it is clear that this does not include investing in their workers. As of December, the lockout at ATI’s twelve specialty metal manufacturing facilities in six states has continued for over four months, having started on August 15 – affecting 2,200 members of the United Steelworkers (USW) union. However, this prolonged labor dispute has not broken the resolve of the workers who are on the picket lines.

Prior to the lockout, ATI offered the USW a “last, best, and final offer” that required major concessions on the part of the union and its workers. In this offer, the corporation demanded a regular twelve-hour workday, the ability to contract out work, changes to health insurance, and a two-tiered benefit system – which, for many, would eliminate pensions – to name a few of the concessions. Since that offer was presented, ATI has refused to negotiate with the USW to reach an acceptable deal – and, in response, the USW filed 18 unfair labor practices charges with the National Labor Relations Board (NLRB), ranging from “coercive actions” to “refusal to bargain.” The USW and its members have maintained that they are only seeking a “fair deal,” and working to retain the terms of the contract that expired June 30.

Due at least in part to the lockout and decreased production, ATI has reported taking $145 million in losses in the third quarter of 2015. However, the corporation has reported that their facilities, currently utilizing replacement workers – scabs – from the strikebreaking firm Strom Engineering, have returned to pre-lockout production levels at most facilities and full production at some. Workers on the picket lines stated that, prior to the lockout, they worked to produce a stockpile of materials and finished products that have been used as the corporation worked to train the scabs.

Most recently, ATI announced their next act of aggression against the locked-out workers. In early November, the corporation informed the union that it would terminate health care insurance to locked-out workers effective November 30. While these workers will be covered in most cases, either under an emergency plan offered by the USW or through a spouse, the termination of their plans is a clear attempt by the corporation to break the will of the union workers. As the lockout heads into winter, workers also face another obstacle in the coming months from the loss of unemployment benefits. Locked-out workers are eligible for 26 weeks of unemployment benefits; however, that six-month period will expire in February of 2016. Workers on the picket lines reported that they were informed that the contract between ATI and Strom Engineering has been renewed into early next year, showing the corporation’s willingness to wait as long as they feel it takes to break the workers. However, it has not shaken the steadfastness of the locked-out workers, who have said from the beginning that they do not intend to give in to the concessions demanded by ATI.

While the USW members have stood fast and refused to capitulate to the company’s outrageous demands, this will most likely not be enough to win. In order to defeat ATI, the union will have to stop production in the plants. Stopping production means stopping profits. This requires mass pickets, including workers from other unions, preventing the scabs from going in. It also means being prepared to defy court injunctions.

Shutting down production is how workers won industrial disputes in the past. Even this is not a guarantee of victory, but without it victory is almost impossible. Tragically, during the last several decades of retreat, the U.S. labor movement has largely lost these militant traditions, but the Kohler strike in Wisconsin which has shut production, shows that they can be rebuilt.

At the same time as this lockout, there is another battle looming, as 13,000 members of the USW at U.S. Steel and 17,000 at ArcelorMittal also face the threat of being locked out. The USW has noted that in negotiations with the two corporations that they are asking for similar concessions to ATI. While there are “continue to work” agreements in place during negotiations, the union feels that these corporations are waiting to see the result of the labor dispute at ATI before they make their next action.