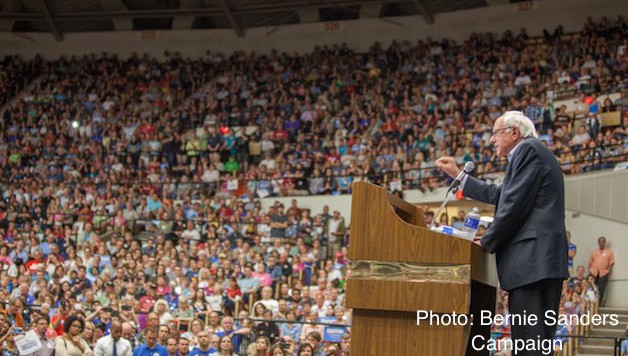 The political “experts” in the corporate media are united on at least one thing: Bernie Sanders is too far left to win. And, of course, this “common sense” argument plays perfectly into the central message of Hillary Clinton apologists. They endlessly lecture the left-leaning Democratic Party voters that, even if you agree more with Bernie’s democratic socialism, to beat the Republicans you’ve got to vote for Hillary’s corporate centrism.

This argument is the main thing keeping Clinton ahead of Sanders in the Democratic primary polling. Understandably, with Trump holding a steady lead among Republicans even as he sharpens his hateful attacks on Muslims, immigrants, people of color, women, and workers, many want to do everything possible to push back this right-wing threat.

The only problem is, the so-called experts and Clinton apologists have it completely wrong. You don’t fight fire with fire. And you don’t fight right-wing populism with corporate politics. Wall Street candidates like Clinton are funded by the same deep pockets that back the Republican Party, and this corporate establishment rests on maintaining inequality and divisions among working people.

Understanding the nature of right-populism is the first step to fighting it. The reality is, if the left is corralled into supporting a corporate centrist like Clinton, if we can’t offer a bold, fighting, working-class alternative to the far right in the 2016 elections, the political space for Trump and his ilk will continue to grow.

A real political alternative for the 99% must be combined with building a mass movement of workers, people of color, immigrants, women, and all those targeted by Trump’s hateful bigotry and the wider threat of right-wing populism.

The reality is that Bernie’s call for a “political revolution against the billionaire class” is widely popular far beyond the Democratic Party base, as are his core policy proposals like taxing big business to fund jobs, education, clean energy, and health care. In fact, while Sanders still trails Hillary Clinton among Democratic Party voters, when matched up against Trump and other top Republican candidates, Sanders consistently polls as well as or better than Clinton, despite the disadvantage of having far lower name recognition!

While it’s clear that Sanders faces steep odds to win the White House – and even steeper odds to win his package of far-reaching reforms – the so-called experts and Clinton apologists are completely wrong about the reasons why. What’s blocking us from winning Bernie’s political revolution isn’t the mythical “centrist majority” among working-class voters.

Despite the endless nonsense from corporate media talking heads, the real problem is no mystery to most politically conscious workers. It’s the entrenched power of corporate America and its stranglehold on our political system, including both the Democratic and Republican parties. And don’t forget the corporate media monopoly which, despite widening options online, remains the dominant source of news and exerts huge influence over popular consciousness.

Even before the first primary, the Sanders campaign has achieved a historic breakthrough for the U.S. left. It has opened up a mass discussion of socialist ideas and demonstrated that it’s possible for a grassroots movement to challenge the corporate domination of politics. Nearly a million people have donated to Sanders – more than any candidate in U.S. history at this stage in the election – and his campaign has demonstrated an unprecedented scale of grassroots enthusiasm.

Polls repeatedly demonstrate that a majority of voters support the core of Sanders’ policy proposals over those of Clinton, including single-payer health care, taxing the rich to fully fund schools and services, massive investment in clean energy, a major jobs program, a $15 an hour minimum wage, an end to the War on Drugs and mass incarceration of people of color, and more.

We would go further than Sanders. As Kshama Sawant, Seattle’s recently re-elected socialist councilmember argued in the previous issue of Socialist Alternative, “even to carry through these basic measures means completely breaking the stranglehold of Wall Street and the biggest corporations over society. This requires more than breaking up the big banks or restoring the Glass-Steagall Act, although such measures would certainly be positive steps. It would entail bringing the big banks into public ownership, along with the big energy companies and other key parts of the economy.”

We have also pointed consistently to our differences with Sanders on foreign policy: we do not think, for example, that a coalition of despotic Middle Eastern regimes is the key to rooting out ISIS. We base ourselves on the interests of working people abroad as well as at home. But we recognize that Sanders’ central appeal is the enormously positive pro-working-class demands he has put forward.

We’re not Democrats, but we want to see Sanders defeat Hillary. Despite Sanders’ decision to run in the Democratic Party primary – a decision we opposed – a Sanders victory would usher in a deep political crisis for American capitalism, create a sharp split in the Democratic Party, and open a space for a historic wave of struggle to challenge the corporate monopoly over U.S. politics.

However, as we warned from the outset of Sanders’ campaign, there is nothing democratic about the Democratic Party’s primaries. It’s an illusion that Sanders can win this rigged game against Wall Street’s candidate, Hillary Clinton, by simply putting forward popular ideas and playing by the normal “rules.” Defeating Clinton will require sparking an upheaval against the Democratic Party establishment on a far greater scale than Bernie has yet achieved. The party establishment, for example, has conspired to ensure that all remaining debates are at times that will generate far smaller audiences than the 15 million who watched the first debate. They are also lining up the “superdelegates” – unelected party officials who are approximately one-fifth of the total – who could be used to swing the Democratic convention to Hillary if it’s close.

Understanding the corporate character of the Democratic Party is vital if the movement behind Sanders hopes to run a viable campaign. Overcoming one of the two most powerful political institutions – alongside the Republicans – of corporate America will require that Sanders build a completely independent political force. Effectively, this means shedding the traditional staff-driven campaign model, which relegates most supporters into bystanders until called upon to donate and volunteer.

Instead, what’s needed is a bold appeal for Sanders supporters to self-organize into a real mass movement. It means building a powerful new grassroots political force capable of waging a fierce battle against the Democratic Party machine at every level of American politics. Effectively this means building a new left political party out of Sanders’ campaign that can continue to organize and fight beyond the elections, win or lose.

Even if big business and the Democratic Party establishment were unable to block Sanders in their rigged primary, there is no way they would simply accept having a nominee representing working people’s interests at the head of one of the two corporate parties. Enormous pressure would be placed on Sanders to water down his platform and demobilize the movement behind him.

If they failed to force Sanders to make major political concessions, the Democratic Party establishment and big business would go all-out to sabotage Sanders in the general election campaign, preferring to see a Republican win than to allow the grassroots movement behind Bernie to consolidate into a new mass political force.

While setting out to turn Bernie’s support into a serious movement will by no means ensure electoral victory, the potential clearly exists for the Sanders campaign to help ignite the kind of wider social upheaval in U.S. society that would be needed to win his program.

Sanders should use his massive reach on social media to encourage mass demonstrations by students for free education – building on the October day of action on 150 campuses dubbed the #MillionStudentMarch – and by workers and environmental organizations against the Trans-Pacific Partnership. He should become more directly involved in the Black Lives Matter protests against police violence, like those in Minneapolis and Chicago, where the movement is demanding the resignation of Mayor 1% Rahm Emmanuel, a close Clinton ally. Right now, Sanders should be joining our call for demonstrations of all those targeted by Trump and the right populists wherever he speaks.

As the battle with Clinton and the Democratic Party machinery heats up, Socialist Alternative is moving more energetically to build the movement behind Bernie. Our goal is the same as the big majority of Sanders supporters: to create the strongest possible challenge to the billionaire class and overcome their stranglehold over American society.

Socialist Alternative will organize with Bernie supporters to build rallies, forums, and debates to expand the movement from below and expose Clinton’s longstanding support for Wall Street and big business. We have repeatedly voiced our opposition to Sanders’ declared plan to endorse Clinton if he loses the primary. Her agenda is diametrically opposed to the aspirations of the millions inspired by Bernie’s platform. Endorsing Hillary would be a surefire way to demoralize, demobilize, and wreck the movement building up behind him. We would instead urge Sanders to continue running as an independent all the way to November, for example on the Green Party ticket.

Win or lose, the most important legacy of this historic campaign will be whether it builds an ongoing political movement against the billionaire class.