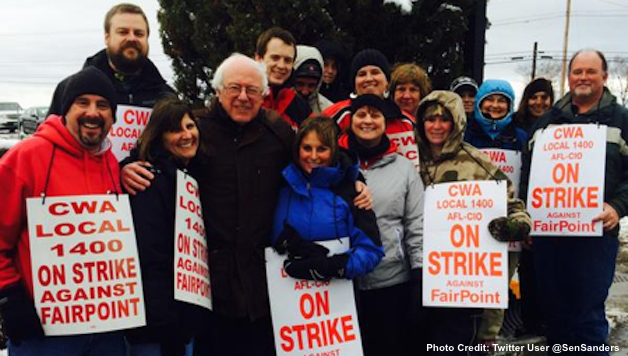 On November 17, the International Executive Board of the Service Employees International Union (SEIU) announced its early endorsement of Hillary Clinton. Despite SEIU’s leadership in the Fight for $15 movement, this announcement comes just days after Clinton opposed a nationwide $15/hour minimum wage, instead favoring a $12/hour minimum wage, during a Democratic Party debate.

In addition to SEIU, the American Federation of State, County & Municipal Employees (AFSCME), the dockworkers’ International Longshoremen’s Association (ILA), the American Federation of Teachers (AFT) and the National Education Association (NEA) have endorsed Clinton. In total, these unions represent nearly eight million working people across the U.S. and have massive resources. Labor for Bernie, a grassroots network of rank and file union members, released a statement on November 20 calling SEIU’s national endorsement “short-sighted and unprincipled” and based on a “failed strategy of purely transactional politics with corporate liberals.”

While National Nurses United and the American Postal Workers Union have endorsed Sanders on a national level, most of Sanders’ union support has come from thousands of rank and file union members and the dozens of locals that have endorsed him. SEIU Local 1984, New Hampshire’s second largest union, broke with their leadership to endorse Sanders. Across the country, SEIU members have overwhelmingly voiced their support for Bernie Sanders on social media.

For example, Linda Davis states: “Was she [Clinton] fighting for workers when she was on the board at Wal-Mart? Is she fighting for $15.00/hr for low wage employees? She is mouthing what she THINKS voters want to hear. Then she will do the bidding of those who bought and paid for her political office once she is elected. Bernie Sanders is the only one who is not owned by corporate America. If you cannot support Bernie Sanders, SEIU, then you do not truly support your members, and I cannot support YOU.”

Bernie Sanders’ campaign has put the issues ordinary people face into the spotlight and popularized socialism for a whole new generation. This presents an important opportunity to build movements and a new party of working people and youth. While Democratic Party “super delegates,” large numbers of elected officials, and corporate donors line up behind Hillary Clinton, Sanders has generated tremendous grassroots support with his bold demands and call for a “political revolution against the billionaire class.” Over 650,000 people have donated to Sanders’ campaign – the highest ever for any presidential campaign at this stage of the election cycle.

From serving on Wal-Mart’s Board of Directors to supporting a plethora of anti-worker policies, Hillary Clinton doesn’t deserve the support of working people. On the contrary, Sanders has consistently supported unionization efforts and working class movements. From a $15/hour minimum wage, to single-payer health care, to tuition-free public college, achieving Sanders’ platform will require a movement independent of the two parties of the billionaire class.

Over the past four decades, union membership in the U.S. has declined and many union leaders have made huge compromises with employers, giving up hard-won gains such as benefits and higher wages. Likewise, most major unions have continuously supported Wall Street Democrats, such as Hillary Clinton. In order to revive and rebuild a fighting labor movement, it is integral to break with these corporate politicians.

As SEIU members continue to fight for $15, the strategy of supporting the “pragmatic” candidate, Hillary Clinton, ultimately means settling for $12/hour and prolonging the status-quo.  At a time when social movements around inequality and racism are exploding, the short-sightedness of the SEIU union leadership to endorse corporate-backed Clinton is astonishing. Instead of lining up with an ally of Wall Street, SEIU could have struck a blow to corporate politics and put its resources behind the growing number of activists supporting Bernie’s call for a political revolution. This also poses the need for SEIU members to reclaim their union as a democratic, fighting force that will be on frontlines of social struggles and for independent political action.