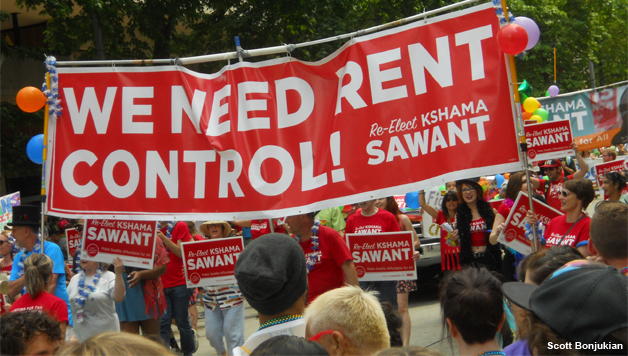 As housing prices skyrocket nationally and internationally, the idea of rent control is again on the rise. In addition to becoming a central debate in Seattle elections this year, new rent control laws were recently passed in Richmond, California, and in Berlin, Germany.

In 2008, a statewide California proposition to ban rent control was decisively defeated, with over 61% in favor of keeping rent regulation. However, as the demand for rent control becomes louder, so does the real estate industry’s fear-mongering campaign. In order to dispel the myths peddled by developers and the corporate media, we interviewed Kshama Sawant, Socialist Alternative Seattle City Councilmember, who has made rent control a central demand of her reelection campaign.

Kshama Sawant: Right now, landlords have the right to raise rents by however much they like: 50%, 100%, or even 200%. People can only take stagnating wages and skyrocketing rents for so long before they fight back. Without the resources and power to control housing supply, communities inevitably are forced to demand regulation over their rising housing costs. Rent control is merely a way of outlawing price gouging and preventing landlords from profiting off the increase in property values driven by real estate speculation and lack of supply. It’s essential to address the existing power imbalance in which landlords and developers have all the control, just as a minimum wage is essential to defend workers from corporate executives who prefer to keep wages low. KS: Developer lobbyists often argue that the price of housing is simply a function of supply and demand. Left to their own devices, though, developers generally maximize their profits by building luxury apartments and condos. And rather than lowering rents, such development, instead, tends to drive up prices in a given neighborhood, as existing affordable housing is torn down and replaced with high-end units. So, contrary to what the proponents of the free market will tell you, we will never build our way to lower rents through private development, no matter how many tax breaks and sweetheart deals are cooked up for profit-hungry developers.

KS: Unfortunately, as in other cities, San Francisco’s rent regulations have been slowly repealed under repeated attacks from real estate interests. In 1995, California passed the Costa-Hawkins Act that prohibited the expansion of rent stabilization to newer units. This created an economic incentive to tear down existing rent-controlled housing, and now San Francisco’s rent-regulated housing stock shrinks every year from demolition as new unregulated units are built in their place. The legislation also deregulated rents after the tenant moved out, so a landlord can raise the rent as high as they want, even though the housing is “rent controlled.” This policy, called “vacancy decontrol,” not only undermines long-term affordability but also gives landlords incentives to evict.

KS: The enemies of rent control often argue that it prevents investment in residential construction, reducing new housing supply. The facts do not support this argument when looking at the actual history of rent regulation. In fact, the two largest building booms in New York City history occurred in periods of strict rent control, first in the 1920s and again from 1947-1965. Rent regulation in no way inhibits construction, which is, instead, controlled by macroeconomic factors such as the boom-and-bust cycles under capitalism. How can we win rent control?

KS: The fight over rent control in Richmond, California – passing 9-2 on the city council only to see developers block its implementation – reveals this struggle for what it really is: a battle to control the housing supply, between the community that needs high-quality affordable housing and big developers who exploit this basic need for profit. While we fight to stop price gouging with rent control, we can also loosen the grip of the market on housing supply by investing in a public option: the construction of high-quality public housing paid for by taxing the big developers. Just as with the $15 minimum wage, winning rent control and affordable housing will require building our independent strength and a movement to demand real action.