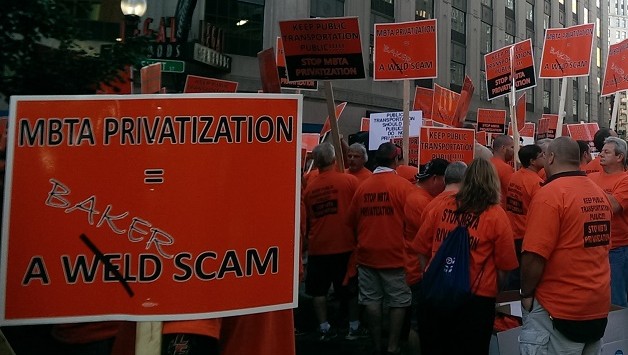 The flyer below was distributed by Socialist Alternative members at a Labor Day rally of over 1,000 Boston Carmens’ Union members (Amalgamated Transit Union Local 589) to “Keep Public Transportation Public”. The union is comprised of transit workers of the Metro Boston Transit Authority (MBTA), the publicly-run system in the Greater Boston area.

Massachusetts’ Republican Governor Charlie Baker has made it a key aim, since he was elected last year, to privatize parts of the MBTA. The budget he pushed through the Democratic-dominated state legislature this year included a three year “lifting” of the Taxpayer Protection Act aka “the Pacheco Law”. The Pacheco Law created significant hurdles to privatization. Only six of the 200 members of the State Legislature voted against the lifting of the law. The MBTA’s subway line, the T, is the oldest subway system in the country. It has been criminally underfunded. This led to a massive crisis during the unprecedented brutal weather the region faced this past winter, with the whole system shut down for days and taking months to come back to full service due to its dilapidated infrastructure. Part of the massive debt held by the T is due to the Big Dig, a disastrous highway megaproject that went billions of dollars and almost a decade overdue. Despite downplaying it, Governor Baker was the main architect behind transferring this privately held debt onto the public transit system. Baker also has created a new, appointed “Fiscal Management and Control Board” to oversee the T, a thinly veiled instrument to carry through its privatization.

Boston continues to grow, and, like many other cities, instead of investing in environmentally friendly public transit, politicians – Republicans and Democrats together – are cutting our public transit systems. Working people are spending more and more time stuck in traffic. The only proven way to lessen traffic is expanding public transit. We need to massively expand public transit in Boston and throughout the country.

Socialist Alternative stands with the workers of the MBTA in their battle against privatization and hopes to help build a strong campaign with public sector workers and community allies in fighting all attacks on public services.

What’s happening now is no accident. We’ve been under attack for decades through unaffordability of living in the city, rising rents, stagnant wages and high transit fares. At the same time, the T has been deliberately underfunded and left to rot, all because there aren’t profits to be made from public services. That’s why they want to privatize the T, to make more money for the super rich.

Charlie Baker and his allies want the public to believe that it is not just the aged and broken transit system itself that caused the disaster last winter, but that the blame lies on the union workers of the MBTA. We know that isn’t true. It is Baker and his predecessors that are to blame. The MBTA has been saddled with billions in privately held debt from the Big Dig. The lack of investment in the system is the same thing private interests are trying to do with public education, to underfund it in order to be able to privatize it.

Privatization means union busting, attacks on our salaries and benefits, and making other working people pay through increasing fares while cutting services. With the likelihood of another bad winter, it is likely that the privatizers will go on an even bigger offensive in the media than they already have.

Charlie Baker and his cronies aren’t the only ones at fault though. Almost the entire state political establishment has supported this attack. Despite all the calls and hours spent lobbying by the union and allies, there were only 5 votes in the MA Senate and 1 vote in the State House against the Budget that included the 3 year lifting of the Pacheco Law. The political establishment has shown us that we’re on our own and that we will have to rely on our strength if we want to keep the T public.

In order to win, we have to organize a broad coalition. We should reach out to other public sector unions like the Boston Teachers Union and the Massachusetts Teachers Association to build a campaign against union busting, fare hikes, cuts to education and other attempts at privatization of public services.

This campaign could hold public meetings in communities these unions serve across the city. These meetings could be used to build for a citywide day of action at T stops and major bus stations around the city. Solidarity committees could be set up in every neighborhood to discuss the campaign and further actions going forward.

A coalition that wins on this issue could then continue to fight against other injustices we face under this system. It could take the fight forward by running candidates against politicians that support privatization of transit, education and other public services.

Socialist Alternative believes that such a campaign has to built on a solid program of demands that resonate with the broadest sections of working people across the city:

-No to Privatization – Reinstate the Pachecho Law!

-No Fare Hikes! No Service Cuts!

-Save the T! For a mass jobs program with union rights and wages to repair and expand public transit through taxes on big business and the rich!

-For a democratically elected MBTA board composed of union members and the community to oversee all transit planning and future development.

-We need a real voice for working people! No support to politicians that support privatization and cuts.