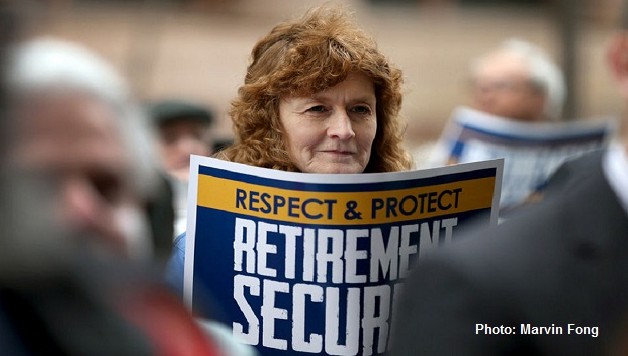 On August 8, 2015, Councilmember Kshama Sawant celebrated the 70th anniversary of Social Security and Medicare at Westlake Park, alongside US Senator Bernie Sanders, State Senator Pramila Jayapal and others. Sawant highlighted the lessons from the historic struggle that won these essential programs and discussed how it applies to today’s movements for economic and racial justice.

Transcript of Speech as Delivered

It is no accident that the victories on Social Security in the 1930s and Medicare and Medicaid in the 1960s took place during times of great, historic movements of the working class and youth, many of whom were people of color.

In 1935, when Social Security was passed, workers across America were on strike for a better life. They fought to unionize through sit down strikes. They took over and occupied their factories, and refused to give them back until their unions were won and their demands met.

It was these American workers, this radical labor movement, that won Social Security. Contrary to the popular myth, it was not handed to them by the benevolence of the ruling elite headed by FDR. In fact, Roosevelt had run for office in 1932 on a promise of fiscal conservatism – of shrinking social programs, not expanding them.

Similarly, Medicare and Medicaid were won in the context of the radicalized 1960s Civil Rights movement. The battle against segregation, lynchings, against the grotesque brutality of Jim Crow racism. They were won under the pressure of the black activists and also of the developing movement against the war in Vietnam.

That is the real complaint of the corporate establishment with what they like to call “the entitlement programs.” They object because it conflicts with their entitlement – their deeply felt sense of entitlement – to make profits off the backs of workers and retirees.

If we are going to defend these programs, we have to recognize that they are under attack from the establishments of both parties. It should be a grim reminder to us that it was Obama who reached out to the Republicans, offering to make cuts as part of the so called “grand bargain.”

As PSARA [Puget Sound Advocates for Retirement Action] and other organizations have pointed out, there is a very, very simple fix for the so-called “baby boomer” problem: Charge rich people the same social security tax that everyone else pays – rather than capping the taxable income at just over a 100 thousand dollars, leaving the income of the super rich virtually tax free.

The solution is simple: Scrap the Cap!

But of course, under capitalism, the simple is not simple, and the rational is rejected as unreasonable. Why? Because it’s a question of power. Our power versus their power. The power of millions of working people versus the power of the billionaire class.

Under capitalism, big business will always be disproportionately powerful. And the second that our movements let up, the billionaires will scratch and claw at us to take back every gain we win.

So what will it take to preserve and expand Social Security to protect all retirees, and to deliver Medicare for all – a Single-Payer/Universal Healthcare System?

History is a guide: Social Security was won in the first place, because the bosses, and the political establishment, were forced to concede under the threat of a new political party – a workers’ party. Eventually, US labor ended up backing FDR, and abandoned the project of starting a new party. But in the countries which did win more far reaching social services than we did – services like universal healthcare, national pension systems, and public affordable housing – these were won in other countries through the development of labor and socialist parties.

We urgently need to build our own political party for America – a party for workers, for people of color, for retirees. A party of the 99%.

A party that does not accept a dime from corporations. A party that is not beholden to the billionaires.

You see, my sisters and brothers, the status quo persists not only because of cynicism and corruption, but also because of this notion that as an elected official, you can represent both big business and ordinary working people.

I hope that the millions who are being spurred into action in our time will become a powerful organized force capable of winning victories like Social Security. And above all, to build a political revolution, as Bernie Sanders has said.

When Social Security was being debated 80 years ago, a Senator from Oklahoma asked, “Isn’t this socialism?”

He was told, “No.” So then he asked, “Isn’t this a teeny-weeny bit of socialism?”

Well, of course, Social Security is a teeny-weeny bit like socialism.

But, my sisters and brothers, working people throughout America deserve more than a teeny bit. We deserve the full, high standard of living that humanity is capable of delivering.

Let us take the fight for our interests into the political arena and onto the streets, and let’s do so on an independent basis – without corporate cash, with our own organizations and political parties.

Just as the fight for a $15 an hour, which began here, is starting to do around the nation.

Let’s use the opportunities of our time to carry on the fight for a different kind of society. A society based on social justice, sustainability, and equality.

Ida B. Wells: Lessons from an Early Black Freedom Activist