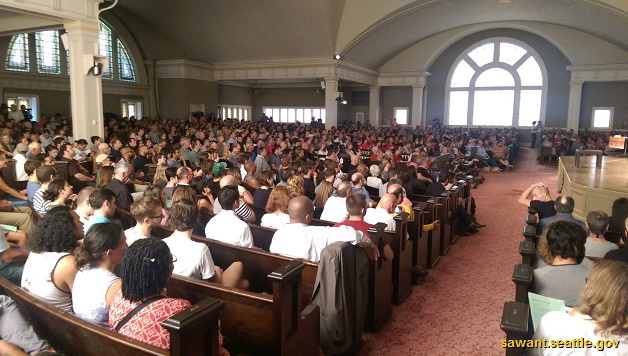 This phenomenal outpouring of community engagement is a continuation of the Affordable Housing Town Hall that Councilmember Licata and I organized on April 23rd and is reminiscent of the numerous public forums held in the run-up to the historic $15 minimum wage victory. It reflects the growing understanding among renters, home owners, and ordinary Seattleites that our affordable housing crisis won’t be solved by backroom deals with developers. The only way to ensure that the needs of our communities come before the profits of speculators and developers is to build a grassroots movement. This debate was another important step in that direction.

After the huge turnout at the rent control debate, many are asking what we can do next to build this movement. Councilmember Licata and I have co-sponsored a Rent Control Resolution on the City Council, calling on Olympia to change the state law that prevents cities from passing their own rent control laws. This would make it official City policy that Olympia should end the ban on rent control, which would give our movement even more momentum.

You can help pass the Rent Control Resolution! I have launched a petition to “Lift the Washington State Ban on Rent Control.” Sign the petition here, and then share it on Facebook and Twitter, and email friends and family.

What is Rent Control and What would It Do?

Rent control means communities and democratically accountable representatives get a say in how much our rents can go up. Right now, landlords can raise rents by as much as they want. It is not uncommon to see rent increases of 50, 100 or even 145 percent in Seattle, along with the ‘shock and awe’ devastation they bring to our families and communities. At a minimum, we need a rent control measure that makes this kind sociopathic price gouging illegal.

Stricter rent controls should also be a part of the discussion. I don’t believe rents should be able to rise more than the rate of inflation. This form of rent control would provide a critical lifeline to hundreds of thousands of working people and retirees on fixed incomes. It would protect our communities of color from the scourge of gentrification and help our neighborhood maintain the character that took decades to forge.

For a Comprehensive Package of Bold Affordable Housing Solutions

Rent control alone will not solve Seattle’s affordable housing crisis. It must be part of a comprehensive package of proposals that includes a massive expansion of legal protections for tenants, a strong linkage fee to make big developers pay $1 billion over ten years for affordable housing, and a bond sale to build thousands of city-owned units that are affordable to working and middle class people.

We cannot let our opponents’ “sky is falling” rhetoric stall our affordable housing movement. In the same way that big business claimed the $15 minimum wage would cause mass unemployment and destroy Seattle’s restaurant and hotel industry, corporate developers and landlords falsely claim that rent control would paralyze construction. There is no evidence that rent control negatively impacts construction and prevents landlords from earning profits. The housing market is driven by macro-economic factors. Some of the biggest construction booms in U.S. history have occurred in places like New York and Boston at times when they had strict rent controls.

We also cannot accept our opponents’ claims that tenants should support giving tax breaks and sweetheart deals to developers because this will “trickle down” to working people in the form of affordable housing construction. With all the handouts developers already receive, if this were true, we would have no housing crisis. Developers and landlords will try to maximize profits no matter what. In Seattle, this means building condos for wealthy people, not affordable housing for ordinary people. Only a mass movement by the majority of Seattleites, whose lives are being turned upside down by out of control rents, can counter this corporate greed.