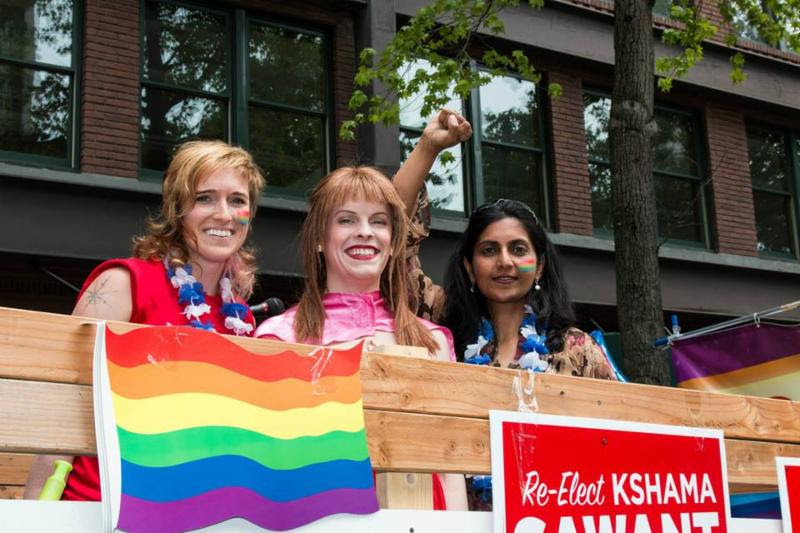 From the transgender women and gay men who fought back against racist police during the Compton Cafeteria Riots in 1966, to the militant ACT-UP organizers who demanded the FDA approve life-saving AIDS medication in the early 1980s, the material gains of LGBTQ and queer people have consistently been won in the streets long before they are won in the courts. Marriage equality is a huge victory for all LGBTQ people but is only one step on the road to true equality as the developing transgender liberation movement shows.

There can be no doubt that Caitlyn Jenner’s decision to come out as a transgender woman on television has captured the attention of the American public, simultaneously launching the transgender community into the national spotlight while instilling some much needed humanity into a national conversation that has up to now focused disproportionately on misinformation and dehumanizing stereotypes. While Caitlyn Jenner’s wealth does not make her personal narrative or identity any less important, the lived experience of thousands of transgender and queer individuals remains dramatically at odds with that of Ms. Jenner, a wealthy celebrity with a reality television show and an Olympic gold medal.

In fact, for transgender and queer people, the fight to be seen as equal under the law is just beginning. Racism and bigotry continue to rot our judicial system from the top down. For example, across the country transgender women are still being housed in male prisons, regardless of government ID. By housing trans women with cisgender (non-trans) males and/or denying hormone treatment and gender confirming surgery to prisoners, the state ignores the very transgender identity they claim to recognize and in doing so, greatly increases the likelihood of the trans inmates being subjected to rape, violence, and needlessly cruel psychological suffering. This kind of contradiction sends a clear message to the most oppressed members of the LGBTQ and queer communities: in the eyes of the judicial system, transgender lives, especially black transgender lives, do not matter at all.

For transgender adults and children, the fight to be treated with dignity is a life or death struggle. The Religious Freedom Restoration Act (RFRA) still allows for legal discrimination on the basis of sexual orientation and gender identity in 19 states, with several more states pending. Under RFRA, anyone who appears homosexual or gender non-conforming can be denied housing, proper restroom access, and medical care, among many other basic services.

LGBTQ people comprise approximately 40% of homeless youth, and transgender people are four times more likely to live in poverty than the general population. For those trans people who do find work, 44%, are under-employed, and 17% maintain a household income under $10,000 a year (compared to 4% of the general population in that age bracket).

At a time when the LGBTQ movement is making sweeping gains on the marriage equality front, we must not forget that transgender people are still fighting for acceptance. The victories on marriage equality can act as a springboard to launch a movement that takes up the issues that affect all LGBTQIA people but tend to disproportionately impact the transgender community: discrimination in housing and employment, a $15 minimum wage, and #BlackLivesMatter.

Many working class trans and queer people have rightly begun to doubt politicians who claim to support LGBTQ people yet continually fail to take real action. The Democratic Party, while not leading on the issues, at least pays lip service to LGBTQIA rights. Meanwhile, not a single candidate running for the 2016 Republican primaries supports marriage equality, and the vitriolic response from the religious right on the Supreme Court ruling is a vivid reminder of the very real consequences of the Republicans in power.

However, what the women’s movement gained, and then lost, in terms of access to abortion, demonstrates that the Democrats are not effective at advancing, let alone defending, victories won by social movements. And, we should not forget that, just a few days before the marriage equality ruling, President Obama silenced and mocked Jennicet Gutierrez, an undocumented transgender woman of color when she interrupted his speech honoring LGBT history at the White House.

A mass movement that is able to mobilize broad layers of the LGBTQ and queer working class holds the best potential to build on the momentum coming out of the Supreme Court decision. But, to achieve larger and lasting victories for queer and trans people we must keep our movement independent, and ultimately direct our struggle against the very system that exploits all working people and uses gender and sexual norms to keep us divided.