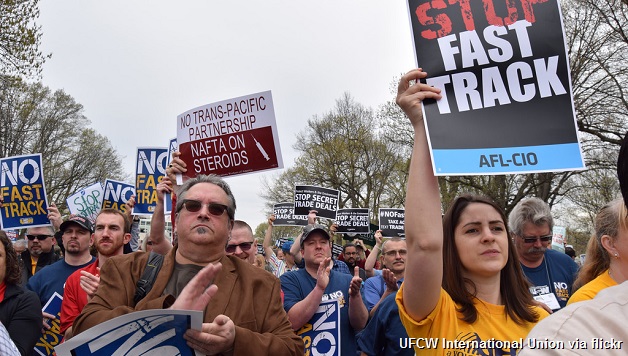 President Obama and Senate Democrats and Republicans, by approving fast-track legislation – a critical step towards passage of the entire Trans Pacific Partnership (TPP) – just stabbed us all in the back.

Millions of people spoke loud and clear – No to TPP, No to Fast Track! Yet the Democrats and Republicans just gave President Obama the ability to continue negotiating in secret the largest trade deal in world history! We need to send a clear message to the pro-corporate politicians that there is a political price to pay when they betray our interests.

Please join me in donating $15 today to re-elect Councilmember Kshama Sawant.  Kshama doesn’t take a penny from big corporations and is 100% on the side of working people and families. Can I count on you?

Kshama led the way in Seattle, spearheading the successful fight for $15 an hour minimum wage and passing a Seattle City Council resolution against TPP despite fierce opposition from the Chamber of Commerce and The Seattle Times.

It’s these same corporate forces that are now funding her opponents’ campaigns.Obama’s signing into law yesterday fast-track authority is a painful betrayal. So many of us poured our hearts and souls into stopping this disaster. It’s a lesson that we can’t count on corporate politicians to represent us. We need our own political voice. One for the millions not the millionaires!

Let’s re-elect Kshama Sawant and then spread her example far and wide!