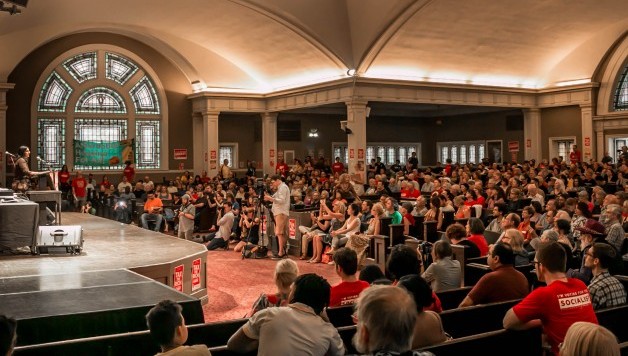 “Seattle is being turned into a playground for the rich, a profit machine for the big developers…I have a different vision for Seattle, one that is based on social justice, equality, and environmental sustainability…where all people are able to flourish and live in dignity…I think that is worth fighting for.” – Kshama Sawant

On the evening of June 6th, around 900 supporters packed Seattle Town Hall to rally to re-elect Socialist Alternative Seattle city councilmember Kshama Sawant.  Throughout the event, progressive leaders emphasized the importance of re-electing Kshama for building the movement to defeat the corporation domination of our lives locally, nationally, and internationally.

The speakers addressed a range of crucial issues and included progressive journalist Christ Hedges, Green Party former candidate for president Jill Stein, local community and union organizers, Socialist Party member of the Irish Parliament Ruth Coppinger, and a Syriza party activist from Greece. Although coming from varied backgrounds, the speakers converged on a single message: Kshama’s presence on the Seattle city council is a fundamental precedent in an age of neoliberal austerity – a powerful sign that corporate politics can be both challenged and defeated – and we must do all we can to help re-elect her.

The energy in Seattle’s Town Hall was palpable, and was reflected in the nearly $30,000 raised for Kshama’s campaign during the two-hour event. This commitment showed every sign of lasting into the campaign season, as supporters pledged their time and energy as volunteers in the fight to get Kshama re-elected.