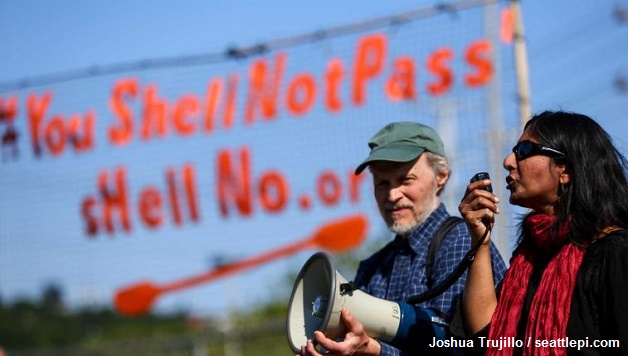 Kshama Sawant is a Seattle City Councilmember and a member of Socialist Alternative.  (twitter: @cmkshama)

There are climate change deniers and there are climate change deniers. The first have completely lost their battle for the minds of people, a battle they were fighting to keep the oil-driven corporate profits flowing. Throwing a snowball in Congress to “prove” that the planet is not heating up – that’s a slap in the face of future generations. And too many are aware of that.

But then there are climate change deniers 2.0. They are the bigger problem right now. They deny to act based on what they pretend to accept. President Obama’s recent decision to grant Shell permission to drill in the Arctic is such an act of denial.

Drilling in the Arctic is not, as Obama has claimed, part of a “transition off of fossil fuels” or towards renewable energy, but a commitment to continue developing drilling technology over the next ten to twenty years – which is how long it will take to exploit the oil and gas reserves in a meaningful way.

Shell is on the list of 90 companies that are responsible for almost two-thirds of carbon emissions in the whole of human history.  There is no existing technology, nor is there the infrastructure, in the remote Arctic to deal with a disaster like the BP oil spill in the Gulf of Mexico. And the conditions of drilling in the Arctic make such a disaster more likely, while at the same time inflicting damage on an even more vulnerable environment!

In 2015, Shell Oil is trying to use the short Arctic summer to establish an initial base for drilling in the Chukchi Sea. But first it must repair its drilling rig, and Shell Oil chose Seattle’s port as the cheapest option.

The arrival of this massive symbol of climate disruption has already spurred hundreds of activists into organizing kayak flotillas and mass direct actions. The Polar Pioneer should not be repaired in Seattle, and not anywhere else. We cannot allow it to leave Seattle.

As corporate politicians fail to stand up to Shell, we need to build on these efforts, reach out to workers who would be employed repairing Shell’s oil rig, and not allow Shell to divide our community on the issue of job creation. This is not about the false dichotomy of jobs or the environment. A program to transfer to sustainable energy and energy savings will create a massive number of jobs.  That’s what’s needed – and that’s what unions and environmentalists need to fight for together.

Be part of this movement, organize protests, and help us challenge all corporate politicians who – despite their words – just act as servants of Shell, Chevron, Exxon, and the like. Arctic drilling ends here!