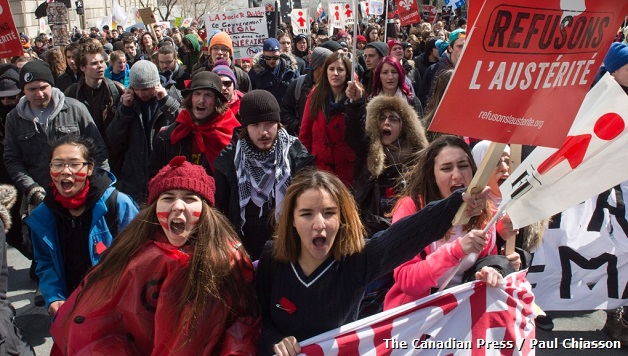 This spring in Québec, thousands of university students went out on strike to protest austerity and the proposed cuts to public services. They were met with brutal reaction, both from police and university authorities. This report is brought to you by Deirdre Grégoire, a participant in the student struggles and a member of Alternative Socialiste (CWI – Québec).

Over 35,000 students are currently on strike, and 75,000 took to the streets on April 2 to protest the Liberal government’s austerity measures. Comité Printemps 2015 (Spring 2015 Committee), a coalition of radical students, is leading the current student demonstrations.

Though the turnout this spring is impressive, it pales in the face of the 2012 student movement – the largest student movement in Canadian history. At its peak, over 300,000 students were on strike to protest proposed tuition hikes. The strike was successful in that the Parti Québécois (PQ) government elected in the fall cancelled the tuition hike. However, the PQ did not end austerity, a result which posed many questions to students and workers.

While many years of groundwork were necessary to build the 2012 strike, the Spring 2015 strikes were built over the course of a few months, sometimes passing only by a few votes. The Association pour une Solidarité Syndicale Étudiante (ASSÉ), which formed the backbone of the 2012 strike, has a strong democratic structure, with elected leaders who are accountable to their constituents at all times. By contrast, Comité Printemps 2015 boasts a horizontal structure with no leadership: There are no specific campaigns nor demands other than for a general strike against austerity, and all decisions are made by unelected subcommittees with no accountability. This structure, and the narrow focus of Comité Printemps 2015 on the most radicalized students, has hurt their ability to reach out to the general student population to join the movement.

Repression from the government, the police, and even the university administration to this year’s movement has been fierce: Ten students are facing expulsion for their involvement in political actions, and police have been admitted onto campus to enforce an injunction forcing a return to class. The ruling class is showing its fear of the student movement. In order to obtain real gains from them, we must work within the already existing democratic student structures in order to rally the whole student population, and next the working class.

Click here to read an extended version of this article at socialistworld.net.