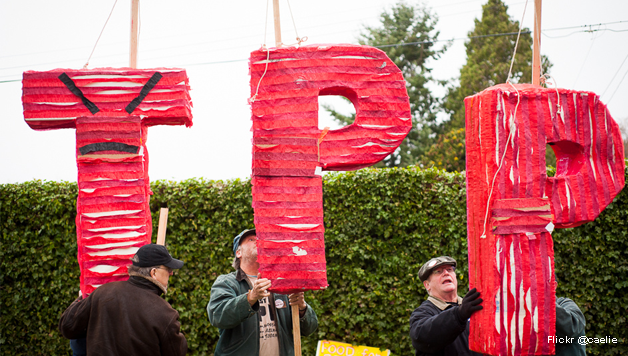 The Trans-Pacific Partnership (TPP) is a massive trade agreement that the U.S. and 11 other countries are secretly negotiating. Like NAFTA and other trade agreements, the TPP threatens to surrender more power to big corporations at the expense of communities, workers, and the environment.

We know, from the leaked Investment Chapter of the TPP, that this trade agreement could give foreign corporations the power to sue the U.S. over any laws or regulations which they believe would reduce their future profits. Likewise, U.S. corporations could sue other countries in the TPP. Protective environmental regulations, health and safety laws, and even labor rights could be challenged or repealed. Under NAFTA’s similar provisions, U.S.-based Ethyl Corporation sued Canada for banning MMT, a harmful gas additive, and won a $13 million settlement.

In the name of eliminating “illegal trade barriers,” the TPP goes even further. It would force the U.S. to waive “buy local” requirements and promote the offshoring of jobs. The TPP also opens up such basic protections as food safety rules to challenge by foreign corporations, if the rules set higher standards than those in the trade agreement.

The TPP will have real impacts on both the national and local levels. Here in Seattle, for example, where we are leading the way on workers’ rights and fighting climate change, the TPP has the potential to unravel our efforts. The “buy local” waiver will harm local workers, blocking the government from prioritizing the purchase of locally made products. The threat of lawsuits from foreign corporations will hinder our ability to pass legislation supporting workers and protecting the environment. And, if we are sued, the city has no right or ability to represent the interests of our community before foreign tribunals, undermining the democratic process.

Right now, Congress is considering granting fast-track authority to President Obama to limit debate and preclude any amendments to the TPP. I oppose the TPP and am especially opposed to stifling debate by fast-tracking a bill developed in secret with such great potential for harm.

Here in Seattle, I am cosponsoring a City Council Resolution opposing the TPP. But defeating the TPP will require a strong and coordinated movement. We must organize against the TPP and any trade agreements or legislation that threaten people and the environment in the name of corporate profits.