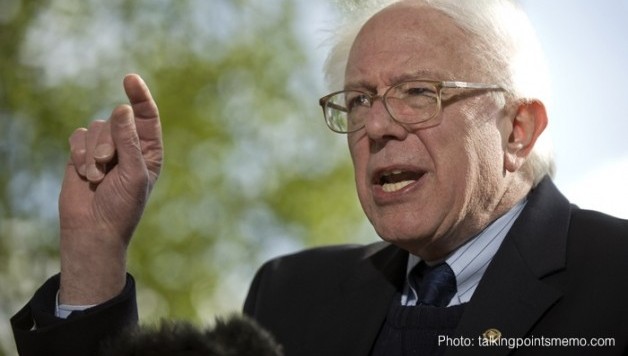 Bernie Sanders, independent Senator from Vermont and self-identified socialist, has made it increasingly clear that he is preparing to run for the presidency in 2016. Unfortunately, Sanders has now also made it clear that he will not run as an independent but in the Democratic primaries, saying he does not want to be a “spoiler,” that is, he doesn’t want to help elect a Republican by taking votes away from the Democrats. If Bernie sticks to this position, it represents a lost opportunity to build a left political alternative to the two-party system.

As Hillary Clinton apparently is in discussions with 200 advisers about how populist she can be without scaring off her corporate backers, there is a huge space to the left of the mainstream Democrats in American politics which is waiting to be filled.

Sanders stands for a trillion-dollar, federally funded infrastructure program to create 13 million jobs, to begin taking more decisive steps away from a fossil fuel economy, for single-payer health care, and for card check to make unionization easier. He speaks a language that enthuses working people but that is alien to the leadership of the Democratic Party – even when it is presenting itself as more populist.

Socialist Alternative has been on record for the past few months in calling on Bernie to run because his campaign has the capacity to galvanize millions of people in the U.S. who are looking for a real left alternative. We have also publicly criticized his positions on a number of issues, particularly on foreign policy. But what we have been most insistent about is that Bernie should run as an independent.

Can the Democrats Be “Recaptured”?

One argument made for standing in the Democratic primaries is that it will enable Sanders to challenge the neoliberal leadership of the party, including Clinton, directly in televised debates. Sanders talks about waging a “battle of ideas.”

The appeal of this is understandable. Millions want left ideas to move from the margins and pose a clear and present challenge to the establishment. However, history shows that it is essentially impossible for a genuine anti-corporate candidate to win the Democratic primaries. Previous left challengers, like Jesse Jackson in 1984 and 1988 and Dennis Kucinich in 2004, built up inspiring primary campaigns, only to cave in to the big business Democrats who inevitably won.

The most effective way to bring a serious challenge to the pro-business agenda is to create a new political force in U.S. society, which takes no corporate money, based on the mass participation of working people. The Democratic Party, despite its real differences with the Republicans on important issues, is wholly dominated by corporate cash and the influence it represents. Through the election of Kshama Sawant in Seattle, Socialist Alternative has demonstrated the enthusiasm which a real left challenge can create.

Last summer when he first declared that he was considering a presidential race, Sanders said he could see arguments for running as an independent. He correctly declared, “The more radical approach would be to run as an independent, and essentially when you’re doing that you’re not just running for president of the United States, you’re running to build a new political movement in America.”

The more serious problem for many progressives is that running as an independent in national elections could split the progressive vote and open the door to the Republicans. This problem cannot be wished away. But if a left campaign laid the basis for creating a new political party representing the interests of working people and, therefore, beginning a more fundamental challenge to the corporate domination of politics, it would be a risk worth taking. This was the opportunity posed by Ralph Nader’s presidential campaign in 2000, when he won a remarkable 2.8 million votes. Tragically, Nader failed to build a new political force out of this campaign. This time, we need to learn the lessons from the past. As Bernie says, we need a “political revolution.” There is still time for him to change course and give real content to this idea.