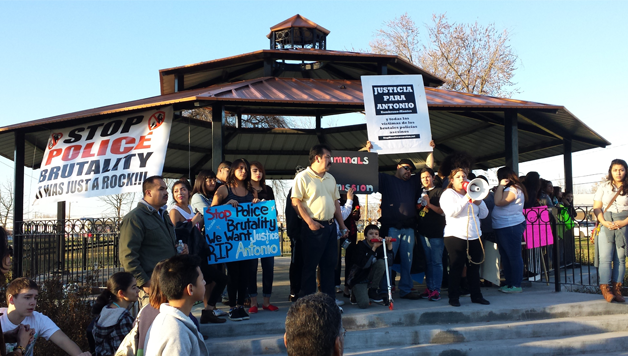 The small farming community of Pasco, Washington has been in shock since the outrageous extrajudicial killing of Antonio Zambrano-Montes by Pasco Police. The family and community has been in mourning this past week, setting up a vigil where Antonio was shot multiple times while his hands were up in surrender. Over a dozen people witnessed the tragedy, and one cell phone recording of the murder went viral. Since Antonio’s death, international media such as The Guardian, Al-Jazeera, and Telumondo have reported on the murder. President Nieto of Mexico even denounced the police killing of the unarmed Mexican expat. Solidarity protests and memorials have taken place across the country, including cities like Seattle, Oakland, and Ferguson.

Protest organizers estimated over 1,100 people participated in the events in Pasco on Saturday. People gathered at noon at Volunteer Park, which is across the street from Pasco’s city hall. Witnesses, community members, and Antonio’s bereaved family and friends then marched for a mile to the site where Antonio was murdered. They were joined by people from all across the state who traveled to Pasco to mourn and express support and solidarity, in hopes to pressure the police department and political establishment to push for charges for the police responsible for Antonio’s death. Before the march, and after, stories were shared remembering Antonio’s life, people leading prayers for peace and justice, and others asking, what is our next step? People in Pasco still discuss what that step looks like, but the demand for justice is center in the discussion.

The protest organizers planned for the march and rally to end at 4:00 p.m. When it officially ended, others in the crowd from the October 22 Coalition made a call for a die-in, and afterward, a march back to Volunteer Park, accompanied with chants for justice and unity in Spanish and English. Many of those still interested joined in the protest, and at Volunteer Park, had an open megaphone, allowing people to share their stories of brutality by police. One of Antonio’s family members spoke to the crowd, and the mother of Oscar Perez-Giron, who was killed by a King County Sheriff Deputy in July, also spoke. Another speaker prayed for justice, and others, worried about what would happen if emotions got out of hand to the point of vandalism or other illegal activity during the march, appealed for peace and restraint. Some also spoke of scaling up the marches, to the point of disrupting the ‘business-as-usual’ activity, by staying in the streets well beyond Saturday, so that there would an economic hit for justice. Another suggestion was to camp out at city hall or outside of the police station, to demonstrate that people will not just go away.

People then marched back to the site where Antonio was gunned down, and joined with the candle-light vigil. The street was supposed to be clear for motorists at 6:00 p.m., but many remained in the streets – about 200, who began picketing and chanting for justice. Eventually, the people moved to a nearby 4-way intersection, stopping all traffic. Protestors blocked traffic for about 30 minutes until a motorist decided to drive through protestors. A mother was able to push her child out of the way, but was struck in the process. One other man who was also struck had to go the hospital. Some of the younger protestors gave chase but could not catch up to the car. After this incident was the first time police showed up in uniform. They gave orders for dispersal, which was rejected and countered by protestors ordering the police to arrest the killer cops. More police reinforcements would arrive over the next half hour, until there was about 50 officers. They then began marching toward one section of people, who cleared out of the way. The intersection had been cleared except for one elderly woman on crutches, who remained. When police began pulling out zipties for arrest, the crowd got very upset – the idea of arresting someone who was there for justice was not lost on anyone.  Someone was able to convince the woman to get on the sidewalk before arrest.

The street had been cleared, but the sidewalks had not. People remained on the four intersections, chanting with signs. Police then said that protestors were unlawful on the sidewalks, and ordered for people to leave the sidewalks or face arrest. Once again, people made it very clear they knew their right to protest and were justified in their demands for justice. The order to vacate the streets, and then the sidewalks, was nothing more than an order to go home and be quiet about police murdering. The protestors remained and would not back down.  Ten minutes later  the police were the ones who backed down and left the intersection entirely.

Auto traffic through the intersection had begun again, with an overwhelming amount of honks for the protestors and their cause. Television crews tried taking interviews at this point, but had to pause throughout due to the near-continuous honking of support for the protestors. About 100 remained beyond 9:00 p.m. that night.

I spoke with organizers before I left, and they conveyed the difficulty of trying to maintain peace and unity during some of the more tense parts of the day. There is understandable anger toward the police that day, especially from the youth. Some news agencies asked pointed questions to a few organizers, trying to pin the tense moments of the day on out-of-towners, but this would be inaccurate.

The response from the Pasco community to this murder demonstrates the impact the Ferguson youth had communities everywhere – that it is possible to fight back against police brutality. Like the communities of Pasco and Ferguson, we should be prepared to mobilize against every atrocity committed by the police against our communities. By linking our struggles together into a mass movement, activating thousands behind clear demands for police accountability, justice for the families of those murdered by police, and demands for community control of the police, we can begin to turn the tide against injustice and build a movement for a new society where black and brown people don’t face systematic oppression like they do under capitalism.