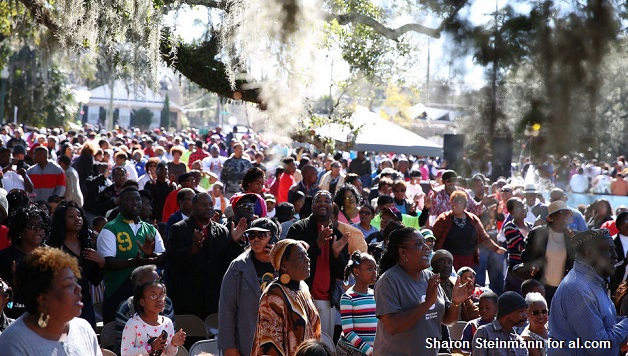 In the wake of the extrajudicial murders of Mike Brown, Eric Garner, Tamir Rice, and too many others by the police, public outrage has reached massive levels all over the country. Mobile, Alabama is no exception. On November 25, Mobile Bay Socialist Alternative called a march and rally demanding an end to de facto legal immunity for police by creating a civilian oversight board with full powers over them. We received extensive local media coverage at this event and made some important contacts from an organization that hosts Mobile’s annual MLK marches, as well as with other local activists. We were also able to use this rally to build a public meeting the following weekend, where we called for the forming of the Mobile Commission of Police Oversight as the means for a sustained campaign for police accountability. At our first meeting on December 13, we created a steering committee and began work toward a legal foundation for a civilian oversight committee.

Mobile has not had a police killing that has grabbed national headlines, but the political, economic, cultural, and even geographical marginalization of black people in this majority-black city is and has always been starkly evident, and the Black Lives Matter movement is providing a vehicle for a long-awaited change.

Our radical demands for a civilian oversight committee, an unbiased, independent prosecutor to take cases against police officers, and body cameras that cannot be controlled by officers and that feed to a third-party server are immensely popular and have received tremendous support from the public.

At this year’s 500-strong MLK rally, Socialist Alternative again had a speaker who stressed Dr. King’s radical legacy as opposed to the sanitized version we usually hear, particularly noting the link between racial justice and economic equality. These points were well received because there is an overwhelming demand for a reimaging of Dr. King as the radical he truly was.

One Year Since George Floyd: What Next for the Movement Against Racial Oppression and Law Enforcement Terror