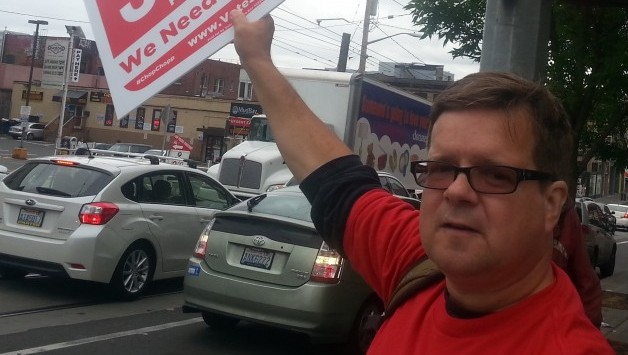 Socialist Alternative was deeply saddened to learn about the death of Dave Thompson, a Branch Organizer in Seattle and a great friend and comrade. Dave had only been a member for two years, yet he made a tremendous contribution to the socialist movement in that time. Our thoughts and sympathy are with his family.

From the beginning, Dave was willing to step up and take on challenges to help us build. He played a big role in the historic campaigns to elect Kshama Sawant to the Seattle City Council in 2013 and in winning a $15 an hour minimum wage for 100,000 workers in 2014. At the start of 2014, we needed a Branch Organizer for the newly created University District branch in Seattle. Though he had only been a member one year, Dave stepped up to lead the branch, setting an important example for the rest of the membership that all members, regardless of experience, can play decisive roles in our local work and make an impact in the national and international political discourse.

I first met Dave during the 2012 campaign to elect Kshama Sawant to Washington State House. Over dozens of vegan meals, Dave and I discussed socialism and our shared concern about environmental destruction. It was during this time that it became clear to me that Dave was one of the most incredibly kind and generous people I will ever have the honor to know and work alongside.