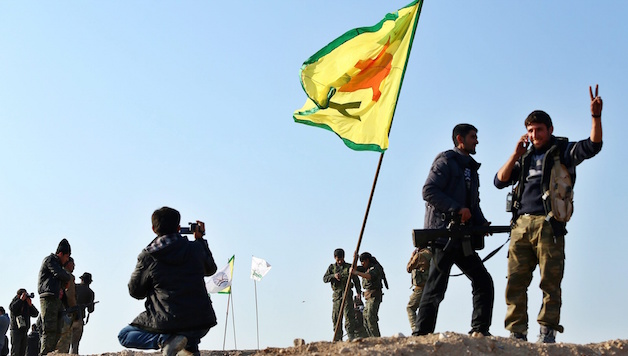 Will the end of Kobanê’s siege turn the tide against IS? The so-called ‘Islamic State’ (IS) had vowed to celebrate the Muslim festival of Eid al-Adha in the mosques of Kobanê. But after 134 days of heroic resistance by the guerrilla units of the YPG/YPJ (People’s Protection Units /Women’s Protection Units), ‘assisted’ by the American-led coalition bombings, and more marginally by Iraqi Kurdish Peshmerga troops and elements of the so-called Free Syrian Army, IS was pushed out of town last week. The black banner of the jihadist group has been removed from Kobanê’s hill-tops, and millions of Kurds across the world are celebrating the liberation of the iconic town.

This is a significant military and psychological setback for IS. It erodes the group’s prestige and the narrative of its juggernaut. On October 27, 2014, the IS had released a video claiming that the battle for Kobanê was “nearly over” and that the jihadists were now “mopping up, street to street, and building to building.” Despite the IS having poured some of its best fighters into Kobanê, outnumbering the resistance and having at its disposal large supplies of heavy weapons and armour, it has eventually been forced into a humiliating retreat.

The precise figure of IS’ losses in the battle for Kobanê is unclear, but all observers estimate it close to 1000 lives, if not more. As IS’ reversals in Kobanê became apparent, it created confusion and cracks within the jihadists’ ranks. The group even proceeded to execute fighters refusing orders to be deployed there. “The fighters argued that the town was not strategically important enough to justify the losses they were incurring”, Financial Times reported in December 2014.

Kobanê’s victory comes also as a blow to the Turkish regime of Recep Tayyip Erdoğan, whose unofficial military, logistical and medical support for the jihadists has been well documented – as much as its aversion to the predominantly Kurdish rebellion in Kobanê and in the other ‘autonomous cantons’ of Rojava. The possibility of a terrorist blowback resulting from the Turkish state’s intrigues was brought home on January 6, 2015 when a female suicide bomber linked to IS blew herself up, killing a policeman in Istanbul’s Sultanahmet district.

The US State Department and the Pentagon have congratulated the resistance fighters of Kobanê for their victory, praising the American-led air campaign in the process. While it would be unreasonable to argue that US bombings did not play a role in defeating IS in Kobanê, it is clear that the American government would not have made this town a priority in the first instance if it was not for the tireless resistance put up by YPG/YPJ fighters on the ground, of whom nearly 600 paid with their lives for the town’s liberation.

The deceitful position of US imperialism cannot be better illustrated than by the words of John Kerry, Secretary of State, who argued in October 2014 that preventing the fall of Kobanê was not part of US strategy, but shamelessly declared now that “Kobanê was a real symbolic and strategic objective”!

The second largest city of Iraq, Mosul, was captured by IS within a few days last June, despite the US government investing billions of dollars into training the Iraqi army. The small city of Kobanê, with far less manpower and military capacities, became a symbol of resistance internationally long before the US decided to intervene in what they considered merely a “sideshow” in their overall plans.

About two centuries ago, Napoleon Bonaparte observed, “An army’s effectiveness depends on its size, training, experience, and morale, but morale is worth more than any of the other factors combined.” The victory of the resistance in Kobanê has demonstrated that a resolute struggle based on people’s social and democratic aspirations, rather than on sectarian affiliations, corruption and profit-driven ambitions, can defeat even the most ruthless and terrorizing force.

This can serve as an encouragement for the millions living under the iron-fisted rule of IS in other parts of Iraq and Syria. In some of these areas, emerging signs of dissent point to the growing exasperation among parts of the population, and to troubles the jihadist group is facing in administering areas as a de facto occupying force.

While IS is still resilient and well-organised, and controls vast amounts of territory in both Syria and Iraq, its brutal crackdown on would-be deserters in its Syrian stronghold of Raqqa or the shutting down of mobile phone networks in the Iraqi city of Mosul indicate that the jihadist organisation is not as invulnerable as it would like people to believe. It is not immune to the possibility of further crisis or even of popular unrest breaking out.

The end of Kobanê’s siege comes as a great relief for all those who have been anxiously watching the four month-long battle against IS’s murderous onslaught. It should not be taken for granted though. The YPG/YPJ have lately recaptured dozens of villages in the surrounding areas, but hundreds that are part of the Kobanê canton remain under IS control.

Kobanê lies now in ruins. This was poignantly captured by a woman refugee from Kobanê who wept as she spoke to the international press: “We all want to go home. But go home to what?” The continuous shelling, bomb attacks and artillery fire by IS, coupled with heavy air bombardments by the US-led coalition, have destroyed entire neighbourhoods leaving them with no access to heating, water or electricity. The reconstruction of the town could become a pretext for private companies to profit from the adversity of Kobanê’s inhabitants, and for Western and regional powers to reinforce their political leverage over the area. That is why it is essential that all outside aid and reconstruction efforts are democratically controlled and organised by the local communities. The border with Turkey should also be opened immediately to allow the passage of refugees who want to go back to their hometown, as well as that of aid convoys and construction material.

While the material costs of Kobanê’s victory are enormous, the rapprochement initiated with Western imperialism by the leaders of the PYD [Democratic Union Party, the political arm of the YPG/YPJ] in the course of the battle for Kobanê can prove to be politically costly. All sort of politically dubious characters can now be expected to team up to try and reap the fruits of Kobanê’s liberation.

The Iraqi Kurdish Peshmerga troops, sent into Kobanê last October through the reluctant patronage of the Turkish government, take orders from the self-serving, pro-big business regime of Masoud Barzani. His plans do not accommodate well with the expectations for social change among many Kurds and rank-and-file supporters of the YPG/YPJ and PYD.

The fighting spirit of the resistance in Kobanê and Rojava has been partially stimulated by the mass support among the Kurds for a long-denied Kurdish homeland. But Barzani’s Kurdistan is hardly anything more than a corrupt and authoritarian client-state for multinational corporations, where workers are exploited and trade union rights flouted. Only by breaking with all the ruling elites, the Kurdish pro-capitalist factions included, will Kurds be able to achieve a genuine and viable self-determination.

Many people are inspired by the Kurds’ courageous struggle for freedom, and by the liberation of Kobanê. But for it to be consistent and sustainable, the resistance in Kobanê and in all parts of Rojava should seek new allies among workers, youth and oppressed peoples across the region, on a clear class basis. This will demand a course of action not only independent from the imperialist powers and the crony regimes of the region, but also directed at repelling them all.

The killings of dozens of civilians by US bombs in IS-controlled areas, in both Iraq and Syria, have brought further radicalisation and driven new Sunni recruits into IS ranks. This shows that any cooperation with Washington or other capitalist regimes, some of whom share a direct responsibility for the growth of IS, will ruin the gains achieved and diminish the appeal of the struggle in Rojava among the masses of the region.

The YPG/YPJ did the lion’s share of the ground work in pushing IS out of Kobanê. In northern Iraq however, the Kurdish Peshmerga are mostly setting the tone in the counter-campaign against IS, which has on more than one occasion taken a dangerously “ethnic” angle. Dangers of retaliation and territorial annexation against the Sunni Arab population, in particular, are very real. Wide-scale revengeful violence by Shiite militia have also been reported in parts of Iraq. In Syria too, a multi-dimensional sectarian civil war is raging.

All this produces a charged powder keg of sectarian tensions. Within these limits, the character of the armed resistance in Kobanê and in the other two cantons of Rojava, relying a great deal on women fighters and on secular and multi-ethnic solidarity, continues to be seen by many as a “lighthouse in the dark”.

But the desire for change that has fleshed out unity among the working people and the poor of Rojava needs to find a clear outlet; otherwise, sectarian violence could come back with a vengeance. A forewarning of this danger came in November 2013, when Salih Muslim, Co-Chairman of the PYD, declared, “One day those Arabs who have been brought to the Kurdish areas will have to be expelled”.

Setting up mass, non-sectarian defence committees is a crucial task for the prevention of bloodshed between communities, and to protect against the danger of reactionary militias, be they IS or otherwise. But sweeping away the dangers of sectarian terror for good will require the building of mass organisations capable of galvanising workers, poor agricultural labourers and young people behind a programme of thoroughgoing socialist change, while supporting the democratic rights and national aspirations of all peoples of the Middle East.

Kobanê’s liberation reaffirms the idea that if the masses have a socially progressive goal worth fighting and dying for, they will achieve wonders. If on the contrary, the fight against IS is left to gangster-like militias and corrupt armies competing for prestige, capitalist markets and imperialist zones of influence, it will be a recipe for disaster.