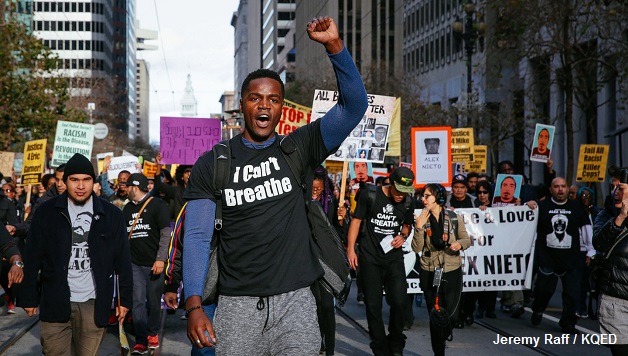 For Huge Protests on 2/21, 50th Anniversary of Malcolm X’s Assassination

The following is the text of Socialist Alternative’s leaflet for Martin Luther King, Jr. Day, 2015.  Click here for pdf version.

Mike Brown, Eric Garner and the countless other victims of racist police violence did not die in vain. Beginning in Ferguson, black youth, joined by thousands of others, have built a movement to honor their memory under the banner #BlackLivesMatter which has become the most significant challenge to racism in the US in 40 years. We must continue building this movement through massive protests, student walkouts and strikes that disrupt “business as usual” and challenge racism and poverty.

Alongside police murders, Black communities across the country face higher unemployment, worse schools, less good jobs and decreased services compared to white counterparts. This is built into the overall system of exploitation and oppression rooted in American capitalism. To build a sustained mass movement that most effectively asserts that “Black Lives Matter,” we need to struggle for economic justice, a $15 an hour minimum wage, fully-funded quality schools and a jobs program to put the unemployed to work.

Black Freedom: Then and Now

When Dr. King was murdered, he was building a movement for what would today translate to a $15 an hour minimum wage as well as a jobs program. King organized not only in the South but also in the North, including in poor working-class communities. He linked the fight against racism and segregation to the struggles of working people, including the striking Memphis sanitation workers at the time of his assassination.

Today, we should continue to link our protests against racist policing to the demands for an increased minimum wage. This can help give the movement an ongoing focus and broaden its scope. Unions have millions of members, including parents of both Mike Brown and Eric Garner, who fight in their workplaces for better wages and working conditions.

The unions, like SEIU and the AFL-CIO, need to use their massive resources and organizers to help build a “Black Lives Matter” national day of action that shakes the establishment to its core. This will strengthen the fight of low-wage workers fighting for higher pay and rights in the workplace while struggling in their communities against racist policing. Coalitions of Black Lives Matter activists, community organizations, unions and socialists should come together with a clear call for coordinated demonstrations from Staten Island to Ferguson, Oakland and beyond. These coalitions should be run democratically and plan actions with clear demands and determined tactics. Saturday February 21st, the 50th anniversary of Malcolm X’s assassination, should be marked with an almighty mobilization of working people and youth to disrupt this system and call for an end to racist policing and poverty wages. The unions and community organizations, alongside the new organizations thrown up by the movement, have the capacity, if they fully mobilize their resources and members, to bring out hundreds of thousands in mass marches and actions on that day.

We should fight for all the change we can get. However, body cameras on cops or voting racist Republicans out of office won’t end racist exploitation that is firmly rooted in American capitalism. In the final year of his life, King argued that: “You can’t talk about ending the slums without taking profit out of the slums. There is something wrong with capitalism. There must be a better distribution of wealth, and maybe America must move towards a democratic socialism.” At the same time, Malcolm X was proclaiming that “you can’t have capitalism without racism”. Join Socialist Alternative to unite working people and youth in the fight against poverty and racism as we build protests, run independent candidates and organize for fundamental socialist change!

Build mass protests against racism and poverty! For community organizations, unions and socialists to come together in coalitions to build coordinated days of action alongside “Black Lives Matter” for racial and economic justice.

For huge protests and student walkouts surrounding February 21st, the 50th anniversary of the assassination of Malcolm X across the country.

Escalate the struggle against racism and poverty! The whole system is guilty!