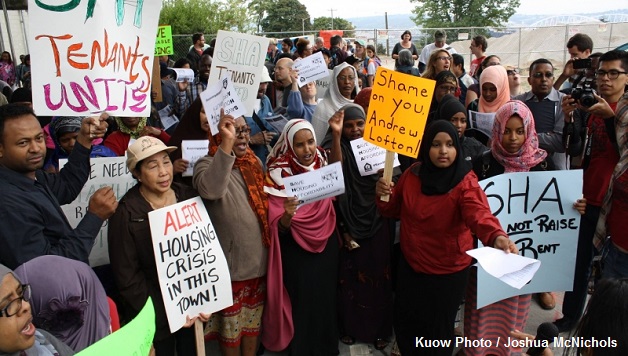 “This victory shows how working-class communities organizing and fighting together with a spokesperson in elected office who is prepared to resist the corporate political establishment can win real gains for ordinary people.”

Congratulations to everybody who participated in such an inspiring movement. On Monday this week, the Seattle Housing Authority (SHA) announced that it will withdraw the proposed Stepping Forward program for a year. In this letter, Executive Director Andrew Lofton says the SHA “decided to put consideration of the Stepping Forward proposal on hold” until at least 2016. Stepping Forward, if enacted, would have increased the rents of low-income tenants by 400% over five years, which almost inevitably would have meant loss of shelter for countless families.

This was a program Andrew Lofton had tried to present to tenants almost as a fait accompli. The fact that our movement has successfully pushed back reflects a monumental victory. Now, the 4,600 families whose rents would have dramatically increased under Stepping Forward can take comfort this holiday season knowing that they will not lose their homes in 2015.

This has broader implications as well. Stepping Forward is only the Seattle version of a national Housing and Urban Development program called “Moving to Work,” which exists in 35 U.S. cities. To my knowledge, we are the first to successfully fight against Moving to Work. Like the $15 minimum wage victory in Seattle, which inspired other cities to pass higher minimum wages, we need to make sure tenants and housing justice activists all across the country understand how the movement beat back Stepping Forward and why we won.

Every step of the way, we were fierce in our opposition to Stepping Forward. Tenants and housing activists organized a series of protests culminating in a walkout at the last SHA public hearing, after which we held our own democratic tenant and community meeting, deciding with one voice to continue our movement.

Taking to City Hall, more than 100 tenants demonstrated at a Council budget meeting and later packed the Mayor’s office (see photo above) to insist that City officials take concrete and decisive action to stop Stepping Forward. With four of seven SHA Board of Commissioner members up for appointment and confirmation, tenants asked City elected officials to sign a proclamation pledging not to appoint or confirm board members unless they publicly expressed their categorical opposition to Stepping Forward and to rents above 30% of tenant income. Later, tenants and activists organized a spirited rally at the SHA Board of Commissioner meeting itself.

The unrelenting fightback by tenants forced the Seattle City Council to send a unanimous letter opposing Stepping Forward. The movement also ensured that the recent Mayoral appointees for the SHA Board of Commissioners are people who have expressed opposition to SHA rent hikes. In this context, the SHA has been forced to cut its losses and put Stepping Forward on hold.

Sisters and brothers, we should recognize the important work we have done, and remain vigilant and prepared to defeat Stepping Forward once and for all. We can start by keeping the pressure on City officials to only confirm SHA Board members who are committed to keeping tenant rents at no higher than 30% of income.

Let’s take the holiday season to celebrate our historic victory with family and friends. Then, let’s get ready for even bigger struggles and wins in 2015.