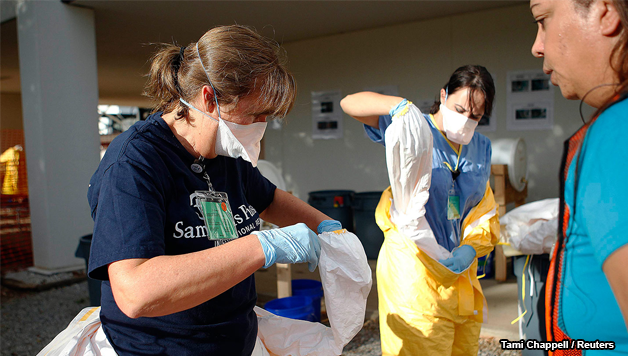 The situation at the hospital in Texas where two nurses contracted Ebola from a patient showed how ill- prepared hospitals in the U.S. are for Ebola. The initial attempt of the Centers for Disease Control (CDC) to blame the nurses themselves for breaching protocol was an attempt at blaming the victims. In fact, the hospital didn’t have proper Personal Protective Equipment (PPE) and didn’t give staff the necessary training to put on and take off PPE without contaminating themselves.

In response to this, the National Nurses United (NNU) conducted a brilliant media campaign. It conducted a survey in October of more than 1,900 nurses in 750 facilities in 48 states. This showed that more than 80% of nurses had not been given adequate training on Ebola. NNU launched an online petition to demand Obama use executive authority to mandate proper PPE, including full-body HazMat suits and powered air-purifying respirators (PAPR), as well as continuing interactive training for nurses who are exposed to Ebola patients

A two-day strike of 18,000 Registered Nurses and Nurse Practitioners took place at 66 Kaiser Permanente Hospitals. A one-day strike took place at a hospital in Washington, D.C. In over 150 locations in 16 states, nurses held actions for Ebola safety, from Florida to snowy St. Paul, Minnesota. Two days after the strikes and actions, NNU announced a victory in California, with Cal-OSHA agreeing new mandatory standards, including full-body PPE suits and PAPRs. This was achieved against the lobbying efforts of health care giants like Kaiser Permanente and other hospitals concerned about the cost of providing expensive PPE to protect their staff. Time and again, hospitals have been willing to risk the lives of their nurses in order to save money. This victory shows the advantages of being organized and fighting back. When we fight, we win!