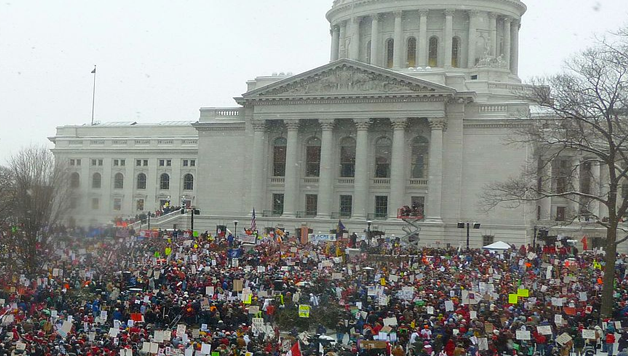 The coming year could very well see increased struggle, on par with the explosive movements of 2011 around Wisconsin and Occupy. In 2015, the movements will have a higher consciousness and more openness to socialist ideas. Already by the end of 2014, we will likely see explosive protests against police violence and the biggest-ever actions of low-wage workers demanding $15 an hour on Black Friday and December 4. That’s what Socialist Alternative is preparing for.

The Republicans have taken the Senate, but this does not indicate a shift to the right in U.S. society. The Republicans didn’t “win” this election; the Democrats lost it. While most “swing” elections were in areas held by Democrats, the minimum wage ballot questions show what a working-class appeal could achieve even in “red states.” In four Republican-controlled states, minimum wage increases were passed with overwhelming support. In addition, San Francisco became the second major city to pass a $15 an hour minimum wage. This sets the stage for big struggles around the minimum wage in 2015, and we have all the momentum.

Low turnout was a crucial aspect of the Democratic defeat. Republicans succeeded in making the election a referendum on Obama’s presidency, meaning that youth, people of color, and others on the left stayed home due to disappointment in Obama. In this election, Democrats were punished for their inaction, their fundamental capitalist character, and their inability to mobilize and motivate their base.

The defeat of the Democrats can have a temporary effect of demoralization among progressives and activists. People may also turn away from electoral politics and more toward an anti-party mood of focusing purely on protests and direct actions. We need to make clear that – as we’ve shown in Seattle – political organization and independent working-class electoral action can energize movements and play a catalyzing role in struggles that win victories. The idea of independent left candidates had tremendous momentum after Kshama Sawant’s historic victory last year. Now, many on the left will see the electoral plane blocked to them and unviable; they will look to movements on the streets, in the unions, and on campuses for the next step.

While many can see that this result is the fault of the Democratic Party leadership, others will make a stronger turn to “lesser evilism” in fear of reactionary Republican attacks. This lesser evilism will only be strengthened further with two years of Republican overreach and attacks. Socialists need to skillfully address these workers and youth tied to the Democrats while also standing against the tide of big business politics.

In the medium term, these election results will intensify the political dysfunction of U.S. capitalism, with Republican obstructionism during Obama´s final two years.

All recent polls and ballot questions show that the Republicans are increasingly out of touch with the opinions of the vast majority of people in the U.S.

Any Republican lawmakers feeling that they have a “mandate” will overstep with reactionary legislation, provoking movements from below.

The Republicans did not come up with any new strategy to reach out to independent or Democratic voters. Instead, they doubled down on the “Southern strategy” of reaching out to older, white voters, particularly in the South. This strategy can only win with low voter turnout and voter suppression among people of color, and it will be less and less viable in coming years. This puts the Republican establishment “between a rock and a hard place” of their reactionary core voting base and their big business backers who want long-term viability of the two-party system.

The Republican establishment will not likely want to go down the road of the government shutdown and debt ceiling debacles of previous years due to the damage it did to their approval ratings. New Senate Majority Leader Mitch McConnell has already said he won’t have that happen again, and that repealing Obamacare isn’t on the table. However, many Republicans paid lip service to obstructing and overturning Obama policy during their campaigns.

At the state level, many Republican and Tea Party governors sailed to victories in what were expected to be losses for them, again due to low voter turnout and lack of enthusiasm for the Democrats. We will see attacks on union rights and public education along with other right-wing legislation in these states that could result in explosive movements.

During the next two years, Republicans will grandstand with reactionary legislation that Obama will veto. These efforts could become a “whip of counterrevolution” that spurs movements into action like HR 4437 did in 2005, sparking massive immigrants’ rights protests and strikes. Right-wing bills could be on immigration, women’s rights, LGBT legislation, or labor law.

Reaching Across the Aisle

At the same time, Obama will aim to “reach across the aisle” to Republicans, as he has for the last six years. The Trans-Pacific Partnership free trade agreement will be the most obvious collaboration, as both sides fundamentally agree on the U.S. ruling class’s drive for profits and domination, no matter what the cost to workers and the environment.

The Republicans will seek some agreement on the Keystone XL pipeline, which will anger large numbers of young people particularly – potentially resulting in large-scale protests and direct actions. There could also be agreement on decreasing taxes for the rich and super-wealthy or other legislation aimed to benefit the super-rich.

Since the election, Obama signed an executive order removing the threat of deportation for five million of the nation’s 11 million undocumented immigrants. This will be seen as a victory by some in the immigrant rights and labor movements, but others will feel it is an inadequate proposal well short of what is needed. It will help the Democrats rebuild their authority among Latinos, but Republican opposition could push people into the streets.

Action on immigration and carbon emissions can, to a limited degree, help the Democrats rebuild their authority with progressives, but this has severe limits as they are also pushing free trade agreements, sending more troops back into Iraq, expanding the surveillance state, and doing the bidding of the big capitalist tax-dodgers. The Democrats’ appeal will be that of a lesser evil, as they are unable fundamentally to counter the attacks of the Republicans with motivating policy proposals.

These future debates, bills, and laws coming from Congress and the White House will serve to undermine both political parties and the system that they represent, laying the basis for independent political action.

Right, left, and center, the midterm elections saw cracks in the two-party system.

From Socialist Alternative’s Jess Spear campaign in Washington State to Howie Hawkins’ campaign in New York, independent left politics made modest steps forward in 2014 (see page 5). There were more left candidates than usual and a slightly increased vote from what the left is used to. However, the vacuum is far bigger than the organized and activist forces of the left are prepared to step into. We showed what was possible in 2013, giving confidence to other activists to challenge the Democrats. The momentum for independent left politics will not be the same in 2015 due to the modest results of these elections.

Most of what passes for the “left” in this country is tied to the Democratic Party. Those who aren’t tied to big business politics are small and often without roots in the working class. This makes it difficult to gain credible results despite the current inequalities, hatred of the two parties, and openness to left ideas.

If even a small section of the unions took the initiative to run viable candidates, then the political terrain and debate in this country would change dramatically. Further class struggle could push this process along if we are fighting on all fronts to push for independent working-class politics.

If the labor movement and left are unable to step into the vacuum, then political polarization will find other expressions, including the development of left and right populism. The Libertarianian Party, for example, got a much higher vote than the left in the 2012 presidential elections, and the non-Republican right was able to field far more candidates than the left throughout the country. On the other hand, left populists among the Democrats like Senator Elizabeth Warren and New York Mayor Bill de Blasio have been asserting themselves. Many progressives are looking for an alternative to Hillary Clinton in 2016, although her candidacy will also excite many based on the idea of electing the first woman president.

Ferguson and Other Struggles

In the next months, struggle can break out on a wide range of questions, but in the immediate sense, the sharpest struggle will likely develop from the outcome of the grand jury deliberation on the killing of Mike Brown in Ferguson (see page 3).

What is happening in Ferguson is not just a singular protest against a police killing; it could be a turn away from the demoralization and despair that has plagued the black community since the destruction and defeat of the black power movement in the 1970s. In this situation, we need to bring socialist ideas to the forefront of the struggle.

While the Democratic defeat will cause some temporary demoralization and confusion, political dysfunction and struggle will be on the rise. Obama will become less and less popular as he reaches out to Republican lawmakers to attack the working class and fails to deliver gains to his base.

Each party can only whip up its base by attacking the other. The world economy is on shaky ground and more workers are demanding wage increases. A movement against racism is emerging, and reactionary Republican legislation could give life to other movements against oppression. Potentially explosive labor battles could be developing despite the far-from-adequate leadership of the unions.

Space will open for independent politics, and more and more young people will be open to socialist ideas. Struggles internationally, likely to increase in coming months, will have a knock-on impact for movements in the U.S. and give more momentum to our growing movement for socialism.

Wisconsin photograph under CC 3.0 License by Justin Ormont and was resized/cropped.