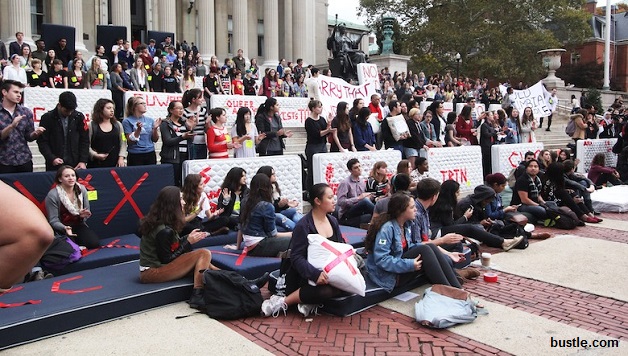 In September, a bill was signed into law in California that overhauls university standards in handling rape and sexual assault cases and attempts to outline a new standard of “affirmative consent.”

This is a result of women standing up against the systematic covering up of rape and assault, especially at universities.

To make the crime – but also the cover-up of university authorities – visible, Columbia University student Emma Sulkowicz began carrying the mattress on which she was assaulted. She carried it everywhere she went on her campus in Columbia University. “Carry That Weight” quickly spread awareness and spurred solidarity action across the country.

The California “Yes Means Yes” law is a reaction to this outcry. It is the first legal victory based on the movement of young women against university administrations that have either tried to cover up the extent of sexual assaults or totally lacked policies to protect young women on college campuses. The U.S. Department of Education said earlier this year that over 55 colleges and universities were under investigation for their handling of sexual assaults and harassment.

“Carry That Weight” came quickly after the #YesAllWomen protests and the wave of protests about the NFL domestic violence cover-up. Altogether, this shows the potential for a much bigger movement taking up the sexist and misogynist discrimination in society, a society based on divide-and-rule, a society relying on systematic discrimination along the lines of gender, race, and sexual identity to allow the top 0.1% to keep control over the majority in society, whom they exploit.

While the California law represents a step forward in the struggle, we need to be clear that there have been very important setbacks for women on other fronts, especially in terms of reproductive rights. There is a determined campaign by the right, particularly in the Southern states, to cut access to abortion services. Roe v. Wade – the Supreme Court decision to guarantee a woman´s right to decide over an abortion – is being systematically whittled away in many parts of the U.S.

The Rape, Abuse and Incest National Network (RAINN) recently published statistics on sexual violence. Every two minutes, a person is sexually assaulted, and they estimate there are 237,868 victims of sexual assault each year. 80% are under the age of 30.