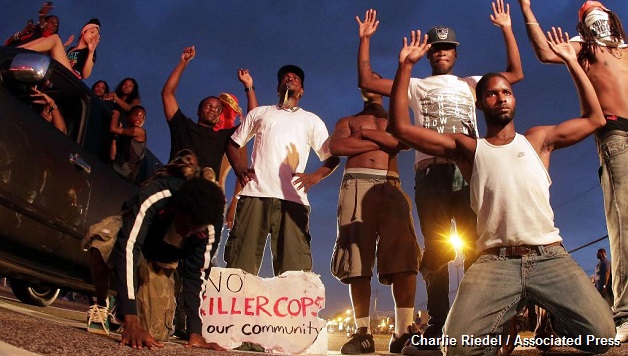 This upcoming weekend, there will be protests in and around Ferguson, MO demanding justice for the racist police murder of Michael Brown. Socialist Alternative will be participating in these actions, sending members from across the region and the country to further express our solidarity with the black community in Ferguson. The events will include a march on the prosecutor’s office and a Socialist Alternative public meeting to make the connections between racist police violence and the struggle against poverty and capitalism. This upcoming weekend could help kick off a new black freedom movement nationally and also a new phase of resistance in Ferguson. Please attend to be a part of history. Send us an email at info@socialistalternative.org to get more information about the socialist presence at this important event. Below please find the text of the Socialist Alternative leaflet being distributed in and around Ferguson this weekend. For a pdf, click here.

The Whole System is Guilty!

An urgent discussion is needed on how to build a new black freedom movement and struggles for better jobs, education and healthcare alongside the fight against racist police violence. Key questions need to be answered: How can we end police violence? What should we demand? Can the Democratic Party help us stop racism? How can this struggle spread nationally? What is the alternative to capitalism? Please join us with your ideas and proposals as we talk about a way forward for this new movement. Bring your questions about what Socialist Alternative is doing and what we stand for.

Socialist Alternative Public Meeting Free and Open to All

Speaker: Eljeer Hawkins is from Harlem, New York. He is a member of Socialist Alternative’s National Committee and is an organizer, speaker and author. Eljeer’s writings and speeches have varied from the legacy of Malcolm X to the prison strikes today. He is an experienced activist in community struggles, the labor movement and for independent working-class politics.

Ferguson has been a living reminder that racism is far from over in this country. In fact, racism has deepened during the recession despite a black President and Democratic Party leadership in every major city. Two million, mostly black men, linger in prison. Unemployment is reaching record highs. Schools are being closed by city governments while money goes to bank bailouts, militarized police and war. Every couple days, a black man is killed by police in this country. So why did Ferguson get so much attention? Because people stood up and fought back. This can be the beginnings of a new black freedom movement to demand good jobs, education, health care, housing and justice. To win real change, we’ll need a movement that can challenge both political parties and their super-rich backers.

The grand jury investigation is a farce. We need an independent investigation of organizations in the black community and the wider working class like the unions. Weekly protests, like the “Moral Mondays” in North Carolina, can help the movement gather momentum and discuss a way forward. These can be combined with calls for national days of action to spread the struggle. Protests nationwide against police violence are gaining inspiration from Ferguson, and this movement should be connected to calls for a $15 an hour minimum wage, fully-funded schools and an end to the racist “war on drugs”. The unions, with their influence and resources, can help build the struggles that can defeat this repression. Inspired by the movement and angry at the police, people are registering to vote by record numbers in Ferguson. The question is: who is there to vote for? Candidates should come from the protest movement, be accountable to the people they represent, refuse to take any money from the super-rich and be independent of the two parties of corporate America. The movement needs a political expression, and independent candidates of workers and poor people are springing up across the country and gaining a bigger and bigger echo.

“You can’t have capitalism without racism.” -Malcolm X

This whole system, here and around the world, is based on exploitation. The super-rich get richer while working people get layoffs, budget cuts and mountains of debt. The two political parties are bought off by the billionaires. To get justice, we need to build a mass protest movement with clear demands and a party of workers and the poor that can challenge the policies of the super-rich.

Kshama Sawant is a Seattle City Council Member and a spokesperson for Socialist Alternative. She was elected last year with over 90,000 votes and led the successful fight for Seattle’s $15 an hour minimum wage. I would like to express my deepest gratitude and solidarity to the people of Ferguson who have brought to light the immense institutional racism in our society. We live in a world of war, poverty, sexism, racism and environmental destruction, but it doesn’t have to be like this. We can get organized to demand better. We won a $15 an hour minimum wage through protests, street campaigning and political action. We exposed the lies of the super-rich, and you are too. We do not live in a “post-racial” society. This is a country with racism built into its roots. To defeat police violence, racism and poverty we need to address the root causes in this system itself: capitalism. Together, we can build a movement independent of the two parties for a world with good jobs, equal rights and dignity for all. We have a world to win, but we have to organize and struggle for it! Join Socialist Alternative to get involved with an organization that is fighting for fundamental change.