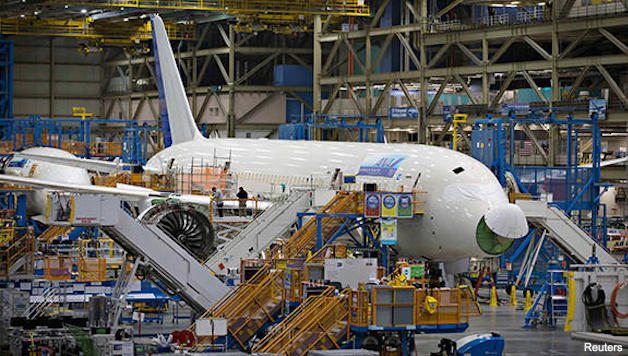 $8.7 billion tax break fails to stop Boeing from moving jobs out of state

“These jobs have to stay here,” says Jess Spear, “the workers are here. They built the company and they are the heart of it. Without their approval, these jobs should not be moved out of our community.” The Socialist Alternative candidate in the 43rd District adds, “I´ll campaign and support the union in any effort to defend these jobs.”

“Governor Inslee and Speaker Frank Chopp owe it to our school system, transit system, and other ailing public services to immediately call a special session of the legislature to rescind the tax breaks for Boeing and use this money to develop high-quality, well-paid union jobs,” says Spear. “They also owe it to the people of Washington to return all campaign contributions they have received from Boeing.”

The Boeing airplane company announced on Monday that it would move 2,000 more jobs out of the Seattle area – terrible news for thousands of families. The move would slash the number of engineers employed in Boeing’s defense work in the region by almost 40 percent. More than 6,000 jobs have been moved out of state by Boeing since they were awarded $8.7 in tax break by the Washington State legislature last year.

Boeing’s stock price has reached record highs over the past period and it’s profits rose 52 percent this year from last year to $1.65 billion. The company has an enormous backlog of orders for it’s airplanes and has won billions of dollars in no-bid contracts from the US government for military equipment. By no stretch of the imagination is the giant airplane manufacturer struggling.

Yet, last year, Boeing’s CEO Jim McNerny demanded historic concessions from Washington taxpayers and workers at Boeing. Otherwise, he threatened to move jobs out of state. In the end, Boeing got everything it wanted and then moved thousands of jobs out of state anyway!

Failure of the Democratic Party establishment

Washington state’s political establishment – lead by the state leadership of the Democratic Party, Governor Jay Inslee and Speaker of the state house Frank Chopp – bent over backwards last year to give everything asked for by the executives at Boeing.

In just three days, in a special session of the legislature convened by Speaker of the House Frank Chopp, the state legislature found $8.7 billion for Boeing in tax breaks – the largest state tax break for a corporation in history. Only 13 state legislators out of 147 in both the Senate and House voted against the tax break!

While Boeing gets everything it wants, Washington’s State Supreme Court ruled this year that the state legislature is criminally underfunding public education by $5 billion and even decided to hold Frank Chopp and other legislators in contempt of court.

At the same time that Boeing executives were demanding tax breaks, they also used blackmail to extort concessions from the more than 30,000 workers represented by the International Association of Machinists. They demanded workers re-open their existing union contract and give up their pensions and other hard-won gains, or Boeing executives threatened to not produce the wing of new 777x in Washington State.

When workers voted two-to-one in November to reject Boeing’s blackmail offer, Governor Inslee publicly intervened to demand a new union vote. The political and corporate establishment of Washington State whipped up fears with a message that, if workers didn’t bend to Boeing’s demands and vote “Yes” in a second vote, the union and the workers would be responsible for the decline of the aerospace industry in Washington State and the loss of valuable jobs.

A second vote was rammed through by the international leadership of the IAM over the outrage of workers in the IAM District Lodge 751. The vote was held just after New Year’s Day when thousands of senior workers were still away on vacations with their families, tilting the vote in the establishment’s favor. Dozens of complaints were filed with the National Labor Relations Board. But, none of the complaints worked out in favor of the workers who were betrayed by Boeing and the Democratic Party leadership in Washington State. While the international leadership completely failed to stand up for their members.

This shows that tax breaks don’t save jobs, and concessions don’t help workers defend their hard-won gains. Instead, it just builds the confidence of the corporate bosses to go further in attacking workers. A few months later, McNerny displayed the full extent of his arrogance when he told Bloomberg he had no plans to retire because: “The heart will still be beating, the employees will still be cowering, I’ll be working hard.”

Boeing has already made plans to expand production of it’s Dreamliner series in non-union South Carolina. Boeing cannot move all it’s production because they cannot replace the skilled aerospace workforce in Washington State overnight, giving workers and the surrounding community power and time to renew the fight on the basis of a new strategy that can defend good jobs in the region without tax breaks and concessions.

Of course, the workers themselves at Boeing have the most important role in defending their own jobs.  “Boeing has a huge backlog of orders for it’s airplanes. If the union were to slow down production, work to rule, and hit the company where it hurts in it’s pockets, then we all, the community, will campaign to support any step to defend the jobs,” says Jess Spear.

The only concern of the Boeing bosses is their bottom line, not the lives of thousands of workers and their families. Workers, their families and our communities are the ones most affected by these decisions by Boeing executives. What right do they have to that kind of power over our lives?  If we want to ensure good-paying union jobs, then we need political leadership that doesn’t give billions in corporate welfare, but instead, is prepared to support workers controlling decisions over jobs, and prepared to use the tools that the government has to take the company out of the hands of the billionaire CEOs and put it in the hands of the workers and communities.

The loss of 6,000 jobs at Boeing in the months following the historic tax break given them by Governor Jay Inslee and Speaker Frank Chopp also shows we cannot rely on the Democratic Party establishment in Washington State to fight for the needs of working people. Their approach of limiting what they support to what is acceptable to the corporations that fund their election campaigns has completely failed to defend good jobs in Washington. Furthermore, it has undermined public services like education.

After the State Supreme Court made it’s decision to hold the legislature in contempt for violating the state constitution and not adequately funding education, Democratic Governor Jay Inslee responded in early September 2014 by calling for closing tax loopholes to fund education. Unfortunately, Gov. Inslee said the same thing in March 2013, just a few months before asking the state legislature to convene as special session to give Boeing a historic-sized tax loophole.

Clearly, we cannot rely on the Democratic Party to fight our battles and close corporate tax breaks for Boeing and other corporations that fund their election campaigns. In fact, the campaign for a $15/hour minimum wage in Seattle showed that we can fight more effectively for our interests by building an independent grassroots movement that doesn’t accept the limited framework for scope of action allowed by the Democratic Party and it’s business backers. Kshama Sawant’s election as a socialist – taking no money from corporations – and 15 Now’s constant threat to put forward it’s own grassroots initiative put enormous pressure on the politicians to deliver.

The whole fiasco with Boeing also shows that Speaker Frank Chopp, the twenty year incumbent and arguably the second-most powerful state politician in Washington, deserves to be voted out of office in the coming November election, along with all the other legislators that rolled over for Boeing while failing to fund our schools.

Chopp currently faces his strongest re-election challenge ever. Socialist Alternative candidate Jess Spear is running for his seat. Spear was the volunteer director for the grassroots campaign of Kshama Sawant that won 93,000 votes as an unapologetic fighter for working people. Spear then became the Organizing Director for 15 Now, the campaign that helped win a $15 hour minimum wage just six months after the election of Sawant.

Spear’s campaign is about building on these victories to create a new kind of politics in Washington State – a kind that fights uncompromisingly for what working people need, and not just what is acceptable to the corporate bosses that fund both political parties. Join our campaign today. Demand no more corporate welfare for Boeing executives! Tax the rich and fund schools, transit, affordable housing and clean energy! Volunteer and donate today!