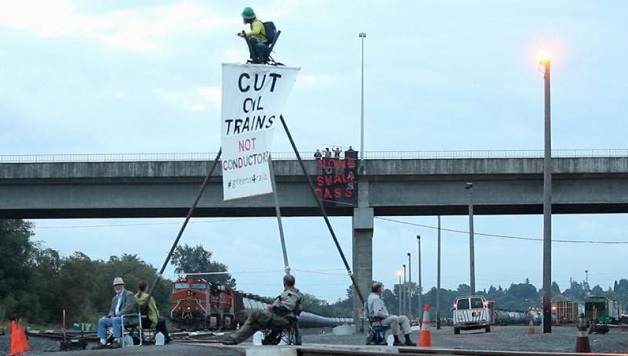 Rising Tide Seattle sent out an online petition this morning which says:

“Urgent! Five brave souls have locked down to train tracks at Everett Rail Yard in Everett, Washington.  Abigail Brockway, Elizabeth Spoerri, Patrick Mazza, Mike Lapointe, and Jackie Minchew are local teachers, small business owners, community members, neighbors, and mothers and fathers. They’re putting their bodies on the line and risking arrest to take action over global warming and the fossil fuel industry. Numerous community members are there also to support them in this action. This is happening RIGHT NOW to bring attention to the coal and oil train crisis in Washington State. Their petition will be delivered to Governor Inslee demanding a moratorium on coal and oil trains. The people want to make Washington fossil fuel free and they need you to sign this petition.” We stand in solidarity with these courageous community activists demanding immediate action to prevent fossil fuels from moving through our state. We support their demand for a moratorium on coal and oil trains. The risk to populations and the local environment from derailments and explosions is too great to leave to chance or to wait for new safety standards to take effect.

Oil, coal, and railroad companies are gambling with our lives and our environment just so they can make ever greater profits. Already, Burlington Northern Santa Fe (BNSF) is attempting to further endanger the lives of the public and railroad workers by demanding a contract with railroad unions stipulating 1-person crews.

I’m a climate scientist running for Washington State House as a Socialist Alternative candidate, and I’m calling for a moratorium on oil and coal trains, a Fossil Fuel-Free Washington, and massive investment in clean energy technology and public transit. But you don’t have to be a climate scientist to understand that continued use of oil, coal, and gas puts our entire global civilization at risk.  Even if these trains don’t explode in our cities or spill into the environment, the oil will still end up in our environment, warming our planet, acidifying our oceans, causing the sea level to rise, and threatening the lives of billions of people on the planet.

We already have all the technology necessary to power society on clean, renewable energy.  Investing in solar, wind, and other clean energy would create millions of decent-paying jobs with good benefits that must be guaranteed first and foremost to any workers displaced by phasing out polluting industries.  However, privately owned industry refuses to invest, and corporate funded politicians in government continue to drag their feet.

My opponent, Frank Chopp, the Washington State House Speaker, accepted at least $2,275 from BNSF Railroad Company.  BNSF is hoping permits will be approved to build the largest coal export terminal in North America in our state so they can transport coal along the same train tracks that protesters blockaded today.  In fact, Frank Chopp has received at least $17,325 from polluting corporations including BP, Chevron, Washington Oil Marketers’ Association, Natural Gas PAC, and BNSF.  However, my election campaign refuses to be corrupted by this corporate cash; we rely solely on grassroots donations.

We need more non-violent civil disobedience actions like this one today and the one I was arrested in recently, and we need to get large numbers of people involved.  On September 21, the largest climate march in history will take place in New York City to pressure world leaders at the UN Climate Summit to take the steps urgently needed to stop global warming and transition the global economy toward a sustainable future.

A growing list of social justice, community, and environmental organizations (including 350Seattle, Idle No More, Divest UW, Climate Solutions, Socialist Alternative, Green Party of Washington, Backbone Campaign, and Puget Sound Alliance for Retired Americans) are organizing a solidarity rally and march in Seattle on Sunday, Sept 21st to highlight the specific fossil fuel projects threatening us here in the Pacific Northwest. We invite more community groups, Indian tribes, unions, and individuals to join us in organizing a mass rally on Sunday, Sept. 21st.

And please vote for, volunteer, and donate to our election campaign.