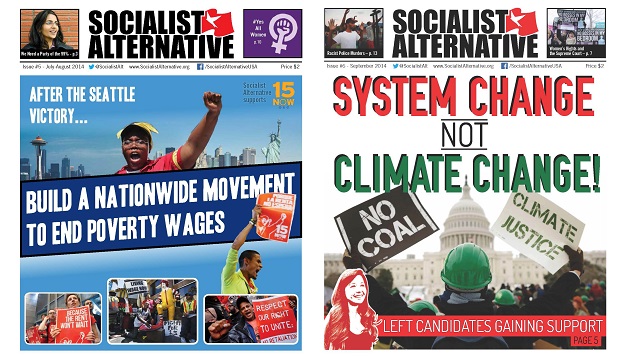 Over the years we have covered a very wide range of domestic and international political developments and social struggles from a working class viewpoint ranging from the attempt to build a Labor Party in the US in the 1990s to the anti-globalization and anti-war movements of the following decade. We covered the mass protest of immigrant workers in 2005-6 demanding “equal rights for all workers”. When the financial collapse of 2007-8 led to mass unemployment and millions of foreclosures we demanded “Bailout Workers not Wall Street”.

When Republican Governor Scott Walker set out to destroy public sector unions in Wisconsin in 2011 Socialist Alternative was there and popularized the call for a one day public sector general strike. We  also participated in the Occupy movement which broke out later that year and gave extensive coverage to subsequent developments like Occupy Homes in Minneapolis. And given our political agreement with the Committee for a Workers International which organizes in over 40 countries we have provided outstanding, in-depth coverage of major developments and struggles that cannot be matched by media organizations with far more resources.

Since the election of Kshama Sawant, the first socialist council member in Seattle in nearly 100 years, the left in the US and our organization in particular has entered a new and very exciting chapter. Socialist Alternative has doubled in size and our national profile has grown by leaps and bounds. It is no exaggeration to say that we are now the most prominent socialist organization in the US. But this is really only the beginning of what can and must be achieved.

Kshama’s election reflected the enormous openness to socialist ideas in the US today, especially among young people. This is part of a broad shift to the left in society. There is an enormous thirst for ideas, particularly for ideas that relate concretely to the development of real struggles. However, people are flooded with misinformation by the corporate media. This is one of the key reasons we need to take a bold step forward in the development of our publications and particularly our newspaper.

We are hoping that this issue of Socialist Alternative will mark the beginning of moving to a monthly newspaper, ie doubling our frequency. However this requires resources. We receive no corporate donations and we are asking you to support this effort by subscribing today at the ordinary rate of $25 for 10 issues or the $50 solidarity rate.

A Marxist paper plays a number of roles. It helps to define the political position of our organization at any given time. We seek to address the key issues facing working people and to formulate demands and tactics that can help take social struggle forward. We want our publications to be really useful tools that ordinary people can use in the fight for a better world.

In Seattle, Socialist Alternative played an important role in leading the fight for a $15 minimum wage. With Kshama Sawant’s public position and the building of the grassroots 15Now campaign this fight ended in victory. It is the job of our paper and website to tell the story of how we did this and to help arm the movement nationally as we push rapidly to replicate this success in cities and states across the country.

Our paper also serves to knit together our growing organization. Our branches use the paper to engage in dialogue with fellow workers and people in our communities at street sales, protests or on the doorstep.

Some leftists question why Marxists focus on selling their paper as a key activity. Some likewise question the importance of a paper in the internet era. We know that many of our new members first encountered our material on the internet. But in trying to connect with a wider working class audience there is no substitute for talking to people directly. The paper is part of that conversation.

For all these reasons, and many more, we feel that the time has come to come to take the next step. Support us by subscribing, and sharing the paper with your friends and co-workers as we seek to rebuild a powerful socialist movement in the US.

For news and analysis from Socialist Alternative delivered to your door, order a subscription of SA Newspaper Today!